Against a backdrop of profound macro uncertainty, natural gas bidweek traders negotiated heavy discounts for April, bunkering down for a potentially tough month ahead. 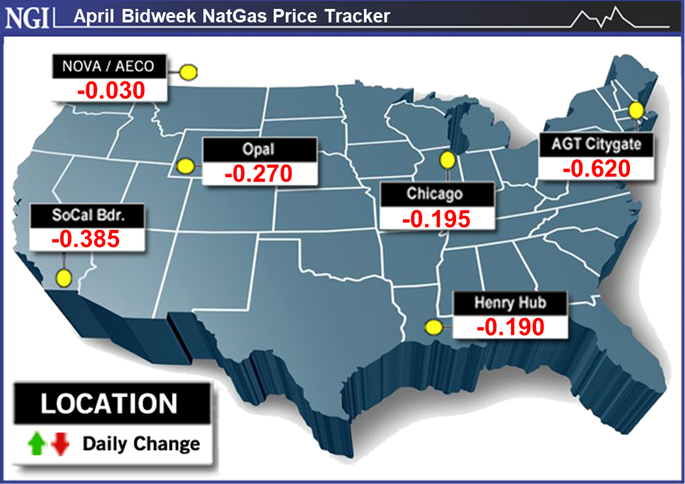 The natural gas industry has weathered major disruptions before. Hurricanes. Pipeline ruptures. Fast-developing winter storms and basis blowouts. But there’s no handbook for managing through a pandemic.

Covid-19 has spread rapidly, threatening the normal flow of business seemingly everywhere and all at once. The natural gas industry is not immune. Already sitting near historic lows after a mild winter, natural gas prices have continued to face downward pressure as measures to stem the contagion’s spread threaten unprecedented demand destruction.

As healthcare workers rush to the front lines to risk their lives to save the lives of others, and as government officials release grim projections of the eventual toll the virus could take, the precise amount of demand lost over the next month has seemed less significant in the bigger picture.

In the face of a global pandemic, the natural gas industry is not immune. But it is resilient. It has weathered major disruptions before.

NGI’s April Bidweek National Avg. fell 19.5 cents month/month to $1.335/MMBtu, coinciding with a deterioration in the prompt-month futures price over the course of March. The April Nymex contract rolled off the board at $1.634, near four-year lows and down nearly 20 cents from the March contract’s expiration at $1.821.

Unsurprisingly, prices have also deteriorated on a year/year basis, with the April 2020 national bidweek average coming in more than $1 below the $2.415 average recorded for the April 2019 bidweek.

The drop in price at Henry Hub for April delivery set the pace for coast-to-coast discounts, with Goldilocks temperatures and social distancing keeping a lid on demand expectations. In the Northeast, Algonquin Citygate tumbled 62.0 cents to $1.470. Over on the West Coast, SoCal Citygate plunged 54.5 cents to $1.645.

“The coronavirus-related closures, here, in Europe and elsewhere around the globe, are unparalleled in their breadth — and still mounting — and their effects on demand will start to become clearer in the coming weeks,” RBN Energy LLC analyst Sheetal Nasta said in a recent blog post. “But what we do know is that fundamentals were weak even before the commercial shutdowns hit.

“Moreover, we’re in the midst of a seasonal shift to the shoulder months, when weather-related demand for gas bottoms out for the year…While Covid-19-related shutdowns likely haven’t peaked yet, those may also be less of an influence on demand in the coming weeks than they would have been earlier this year.”

For the month of March, the residential/commercial sector led a 9 Bcf/d (10%) year/year drop-off in total Lower 48 demand, according to RBN estimates, a result of “exceptionally mild” weather and an early start to the shoulder season.

At this point in the season, power burn from air conditioning demand will start to emerge as the main driver of domestic gas consumption, Nasta said.

“So the teleworking and shelter-in-place orders that are now keeping many more people inside their homes nearly around the clock could actually boost power burn and help to offset declines in commercial and industrial use through the shoulder months, especially if temperatures continue trending warmer than normal,” she said. “…However, prolonged shutdowns that extend well into the hottest summer months could have the opposite effect and reduce overall cooling load.”

On the supply side, recent rig counts — along with a spate of announcements from operators — have pointed to a swift pullback in upstream activity.

But the “inevitable production slowdown” will take some time to materialize, according to Nasta. The main factors driving this delay are “completions of revenue-generating drilled-but-uncompleted wells, a focus on the absolute best drilling locations and the resulting efficiency gains, and the number of older wells now in their steady-state decline phase,” she said.

Still, there could be “potential mitigating factors” serving to limit supply entering the market during the shoulder months.

“We are entering maintenance season, when midstreamers utilize the lower-demand shoulder period to conduct pipeline and other maintenance,” Nasta said. “This can result in temporary capacity reductions for production receipts. Thus, while Covid-19 restrictions may disrupt some midstreamers’ maintenance plans, it’s possible we could see some modest and short-term supply disruptions during the spring and early summer months due to planned or unplanned outages.”

Longer-term, the picture for natural gas prices starts to look very different, evidenced by action farther out along the futures curve. If recent history serves as a guide, current conditions are setting the stage for a natural gas rally by next year, according to BTU Analytics analyst Tony Scott, who said end users might want to brace for a “looming price spike.”

“With natural gas production already off over 2.0 Bcf/d from its peak in November 2019 and declines accelerating in oil plays, the extent of the rally in 2021 will only be limited by the level of U.S. demand over the winter of 2020/21.”

The January 2021 Nymex contract rallied nearly 30 cents during the month of March, reflecting an outlook for fundamentals during that time frame that could prove “rosier” than the reality, according to analysts at EBW Analytics Group.

The firm has modeled more than 500 Bcf of coronavirus demand destruction between November 2020 and March 2021.

“Others, however, appear to have a much rosier outlook for an economic recovery,” the EBW analysts said. “If one assumes no demand losses over the winter, the effect of declines in associated gas production could put end-of-March storage on pace for under 1,000 Bcf — and that is after ending the 2020 injection season at record levels.”

Amid the turmoil created by Covid-19 and the collapse in oil prices, a “temporal dislocation between near- to medium-term demand impacts loosening the market and medium- to longer-term supply impacts tightening the market” is playing out, according to the firm.

“Stronger winter contracts are creating an extremely attractive spread for storage marketers who can buy cheap gas, inject it and sell a higher-priced futures contract,” the EBW analysts said. “This mechanism has already led to surging injections in the South Central region — and is helping to support both spot market and near-term futures pricing.”

Downside risks remain for natural gas prices as more information about the effects of Covid-19 come to light, they said, noting that the duration of the crisis remains uncertain.

“Over the next few weeks, near-term figures will begin to take concrete shape — likely weighing on the front end of the Nymex curve,” according to the EBW team. “Further, it may become increasingly evident that the virus will return in the fall — disincentivizing business investment — and lingering economic damage will weigh on winter demand projections.

“As storage levels surge and demand expectations weaken, the Nymex futures curve is likely to come under growing downward pressure.”