Frustratingly low commodities prices continued to exert their force as 2015 wound down, with a majority of the companies participating in NGI’s 4Q2015 Top North American Gas Marketers Ranking reporting lower sales transaction numbers than they did in 4Q2014. 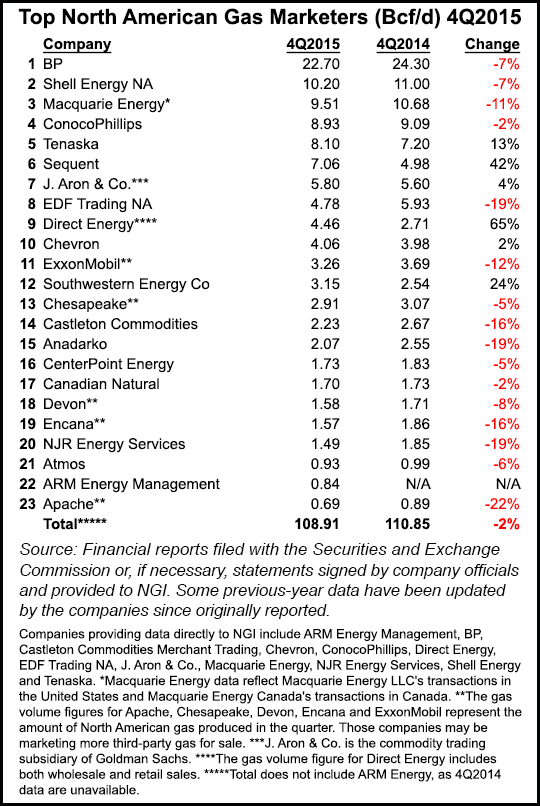 Twenty-two leading gas marketers reported combined sales transactions of 108.91 Bcf/d in 4Q2015, a 2% decline compared with 4Q2014. Five of the survey’s top 10 marketers and 16 companies overall reported lower numbers in 4Q2015 than in the year-ago period.

Muddying the waters for expectations of higher prices and a reinvigorated natural gas industry are the dual constraints of lower rig counts and difficult-to-predict pipeline openings, according to Stephen Smith of Stephen Smith Energy Associates:

“When you have a massive boom in a place such as the Marcellus and Utica, what happens is the need for infrastructure is a multi-year project and it defies any kind of ‘look for a 12-month lag between when the price comes up and when this capacity comes on line,'” Smith told NGI.

“You’ve got two factors involved, and the time factor in the second stage of the process — that is, the buildout of pipelines required to serve this big surge in potential wellhead production — is a complicated and messy process. It’s made even more complicated by the fact that it’s so regionally bunched up. No one really had a good way to sort of put this into equations, so to speak, about how long the whole process was going to take. So every time that gas supply appears to be flattening out, another little pipeline comes on, or another big pipeline comes on…

“So you’ve got these alternating constraints, and sometimes one is opening up potential for capacity — ie, drilling a lot of wells — but the other one is a binding constraint behind it. And other times you’re going to ultimately open up that new pipeline and the fact that the rig count has collapsed and you don’t have anymore to put in the new pipeline you built, that’s going to start to have some effect…It has to do with the unpredictability of the pipeline piece of this.”

For a third consecutive quarter, NGI‘s survey found declines among the top four companies (see Daily GPI, Dec. 4, 2015; Sept. 10, 2015), including perennial No. 1 BP plc, which reported 22.70 Bcf/d, a 7% decline compared with 24.30 Bcf/d in 4Q2014. BP reported a 91% decline in fourth quarter profits year/year, with earnings off 89% sequentially as writeoffs from canceled projects and writedowns from lower realizations slammed the supermajor (see Daily GPI, Feb. 2). But CEO Bob Dudley said recently he expects the demand for oil to catch up with falling output later this year, easing the glut that has ravaged commodity prices.

ConocoPhillips, which has been plagued by significant declines since it implemented business model restructuring in North America following the spin-off of downstream operations almost four years ago (see Daily GPI, April 17, 2012), reported just a 2% decline compared with 4Q2015, the smallest decline of the survey’s top four companies. In a sign of just how grim the commodity price environment has become — and how long it’s expected to last — the Houston-based producer cut its quarterly dividend for the first time in at least 25 years last month, while also dropping 10 rigs and slashing capital expenditures for 2016 as it looks to maintain its balance sheet without racking up additional debt (see Shale Daily, Feb. 4).

Joining the survey for the first time in 4Q2015 is ARM Energy, reporting 0.84 Bcf/d. The Houston-based company focuses on providing marketing services to small- and mid-size producers. Simultaneously, Gazprom leaves the survey, with a spokesman telling NGI the Russian company has “de-emphasized physical gas as part of our business.”

The NGI survey ranks marketers on sales transactions only. FERC tallies both purchases and sales. While production was rising, natural gas trading continued to decline in 2014 compared with 2013, according to an analysis by NGI of 2014 Form 552 buyer and seller filings with the Federal Energy Regulatory Commission (see Daily GPI, May 28, 2015). Total volumes bought and sold declined for the third consecutive year, reaching 114,603 TBtu, down 3.0% compared with 2013. It was the lowest reported volume total since FERC began publishing Form 552 data six years ago (see Daily GPI, July 6, 2009).