The fallout of the prolonged Arctic freeze that’s draped over the central United States and into Texas is still unfolding, with a temporary ban on gas exports out of the Lone Star State the latest development in the ongoing crisis. 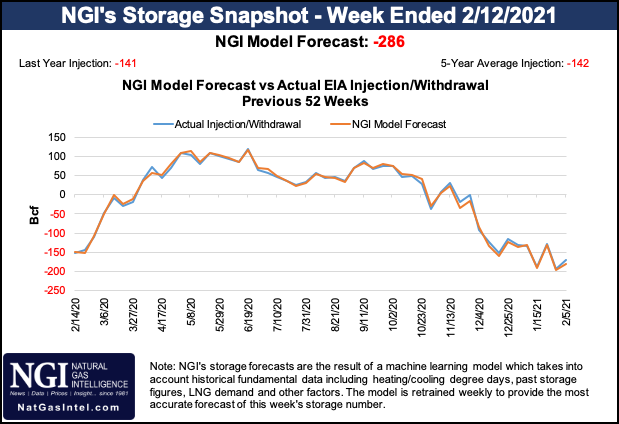 Hours before the surprising announcement, steep decreases in production and large swings in demand fueled Nymex gas futures prices for a second day. Facing what potentially could be the largest storage withdrawal of the winter so far, the March Nymex natural gas futures contract settled Wednesday at $3.219, up 9.0 cents from Tuesday’s close. April picked up 4.9 cents to $3.032.

Action in the cash markets remained volatile midweek as Oklahoma added another digit to next-day prices, while prices in other parts of the country also started to tack on more meaningful gains than in recent days. However, other areas tumbled in dramatic fashion, helping to send NGI’s Spot Gas National Avg. down $40.135 to $40.625.

The energy crisis in Texas is far from contained, with additional prolonged power outages implemented across the state early Wednesday as temperatures remained not far above freezing. The state’s electric grid operator, the Electric Reliability Council of Texas, said some 185 generating units have tripped offline for one reason or another amid the unprecedented freeze. Until more generation comes back online, power restoration efforts would be hampered.

In a media address on Wednesday afternoon, Texas Gov. Greg Abbott noted that some natural gas produced in Texas is currently being shipped to locations outside of the state. In response, the governor issued an order prohibiting those producers from transporting that natural gas beyond state lines.

In addition, Abbott said that President Biden has assisted Texas with orders that “allow additional power generation or have accelerated nuclear plant restoration.”

Still In the Dark

In Texas, some 28,000 MW of thermal generation has been forced off the system during the extreme weather event, according to ERCOT. Another 18,000 MW of wind and solar also have been kicked off the grid.

EBW Analytics Group said ERCOT largely abandoned the use of rolling blackouts, instead leaving a large portion of the state without power, fearing that the grid might collapse if more stress were put on the system. “ERCOT’s CEO estimated that if the grid collapses, it might take a month to restore power,” EBW analysts said.

The Southwest Power Pool also continued to operate under an emergency order, urging homes and businesses throughout its 14-state region in the central United States to conserve electricity. However, as of Wednesday afternoon, it was not directing any interruptions of service.

Midwest prices, however, fell by the triple-digits, as did some Rockies pricing locations. East Coast prices also started to crumble. Transco Zone 6 NY next-day gas averaged $13.495, down $1.500 from Tuesday.

Futures prices also remain subject to strongly conflicting forces, according to EBW. On one hand, record amounts of production are offline, the firm said.

Bloomberg and NGI data showed output dipping to 72 Bcf/d by Wednesday, “a level not seen consistently since January 2017,” according to NGI Director of Strategy & Research Patrick Rau.

Wood Mackenzie has seen a similar stark decline in production, though it said the figures could be understated, and revisions are possible.

The firm said there could be a fair amount of gas in the Permian and on intrastate pipelines that is being delivered directly to meet local demand, rather than showing up as production in its models. Meanwhile, gas pipelines are still reeling from the cold, with many operational flow orders and forces majeure still in place.

Meanwhile, exports, both to Mexico via pipeline and in the form of liquefied natural gas (LNG), have been heavily impacted by the reduction in supply.

Mexico relies on U.S. imports for 70-80% of its gas supply needs, and gas-fired plants account for about 60% of power generated in Mexico.

The situation across the border may become more dire given Texas’ temporary ban on outside gas sales.

Already, LNG terminals in Texas slashed demand after Abbott asked exporters to curb operations in order to help ERCOT avoid an even more dire system outage. Freeport LNG shut down the second and third production units at the facility on Tuesday, the company said in a regulatory filing. The first train was shut on Monday because of freezing conditions that affected a pretreatment facility.

Cheniere Energy Inc. also is said to be diverting vessels away from Corpus Christi to Sabine Pass in an effort to curb electricity use. Meanwhile, power was restored at Cameron LNG in Hackberry, LA, which is working to ensure it can safely restart operations.

There is some discrepancy in the Global Forecast System model and its European counterpart, which is “neutral to potentially a touch bearish,” according to the most recent run.

In the very near term, Nymex futures may take direction from government storage data. The Energy Information Administration (EIA) is scheduled to release its weekly inventory report at 10:30 a.m. ET on Thursday.

Ahead of the report, major surveys showed draws steeper than 200 Bcf, which would be the largest pull of the season so far. Reuters polled 18 analysts, whose estimates ranged from withdrawals of 288 Bcf to 202 Bcf, with a median decrease of 250 Bcf. Wall Street Journal estimates were in the same range, with a median of 251 Bcf decline. Early indications from a Bloomberg poll produced a tighter range, with a median draw of 245 Bcf. NGI projected a 286 Bcf pull.

Last year, the EIA recorded a 141 Bcf during the same week, while the five-year average withdrawal for the period stood at 142 Bcf.