Natural gas prices for June fell an average of 5 cents from April 27-May 4 as an increasingly bearish weather outlook for the remainder of May added to pressure already being brought on by heavy producer selling, according to NGI’s Forward Look. 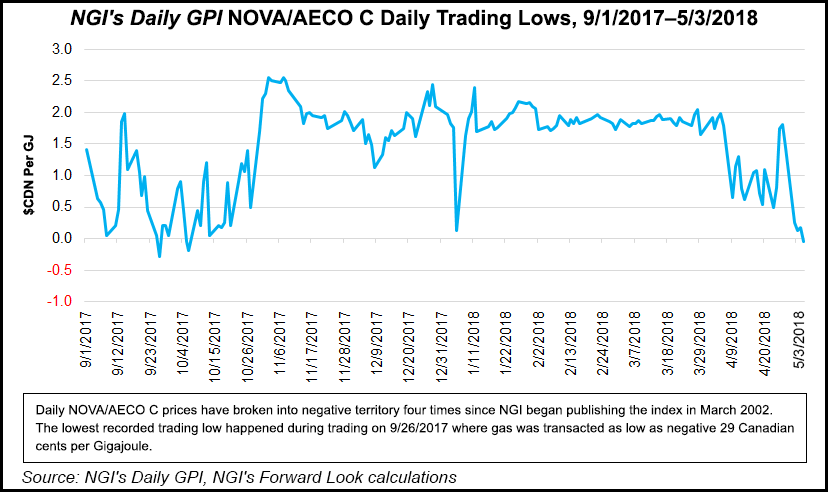 The Nymex June futures contract traded in a tight band throughout the week and eventually slid to $2.726 on Thursday after a much larger-than-expected build to storage inventories was reported by the U.S. Energy Information Administration (EIA).

The EIA reported a 62 Bcf build into stocks for the week ending April 27, well above most estimates in the in the low 50 Bcf range. Last year, EIA recorded a 68 Bcf injection for the period, and the five-year average is 69 Bcf. Shortly after the 10:30 a.m. ET release of the number, the June contract — already down after selling earlier Thursday morning — dropped about 2 cents to around $2.700-2.710.

The larger-than-expected injection came after a string of consecutive bullish misses — withdrawals driven by colder-than-normal April weather. “We see this print as slightly bearish; EIA data the last couple of weeks ran decently tight to expectations, while this more bearish print confirms that was overdone,” Bespoke Weather Services said on Thursday.

Total working gas in underground storage stood at 1,343 Bcf as of April 27, versus 2,246 Bcf last year and a five-year average inventory of 1,877 Bcf. The year-on-year deficit increased slightly week/week from 897 Bcf to 903 Bcf, while the year-on-five-year deficit widened from 527 Bcf to 534 Bcf, EIA data show.

Despite the widening deficit, storage builds are expected to increase quickly in the coming weeks as the most recent weather models are holding onto a very comfortable spring pattern for almost the entire country during the next three weeks. There will be, however, weak cool shots across the far northern United States and hot conditions over the Southwest and at times into Texas, forecasters at NatGasWeather said.

Overall, though, weather patterns are favored to remain neutral to bearish into the foreseeable future, with much larger storage injections to come, likely increasing to 90-100 Bcf-plus for numerous weeks in a row, the weather forecaster said. More intimidating heat isn’t expected to be widespread until after the third week of May, and more likely not until early June.

“This gives four to six weeks of opportunity where strong production and favorable weather patterns can combine to produce very large builds that should consistently exceed 90 Bcf. The failure to do so would be considered disappointing,” NatGasWeather said.

Still, while weather will play a hand in driving storage injections, the onus will be on record production tightening the current deficit to historical levels. “Again, we see this is as being much different than this past winter where the burden was on cold weather patterns coming through,” the weather forecaster said.

Indeed, while Thursday’s surprise storage report may have eased some of the market’s fears about the pace of injections over the summer, Mobius Risk Group analysts said if the weekly average injection from May-June fails to top the 90 Bcf threshold, “market participants may become less confident in a 3.5 Tcf end-of-October inventory level.”

For now, prices remain range-bound in the low to mid-$2.70s, “a level prices keep gravitating toward in recent months,” NatGasWeather said. The forecaster expects that trading range to finally break in the next few weeks as the markets decide if record production is “reducing deficits at a pace they are comfortable with or not, just as more intimidating heat looms.”

With temperatures in New York City reaching a scorching 90 degrees during the first week of May, industry analysts were keeping a watchful eye on how the weather may impact demand. Although warmer-than-normal weather bears well for an erosion of heating degree days (HDD), there are growing expectations that it may cause demand for cooling to rise faster than normal and in turn, suppress the effective rate of injection, Tudor, Pickering, Holt & Associates Inc. (TPH) analysts said.

“Over the past five years, cooling degree days typically surpass HDDs in late May/early June… If it occurs earlier this year, demand will be stronger than expected,” TPH analysts said.

Data and analytics company Genscape Inc. indicated there was much stronger demand during the past week in the densely populated region of Appalachia. Demand surged above 11 Bcf/d on April 30, but then fell to 9.54 Bcf/d by Friday (May 4). Demand was expected to decline even further during the next two weeks, sliding to 6.56 Bcf/d by May 11 and then holding relatively steady at 6.86 Bcf/d by May 18.

Taking a look at other markets across the country, most pricing hubs followed the Nymex lower by a nickel or so across the front end of the curve. Steeper declines were seen in Iowa, where Northern Border Ventura June forward prices plunged 11 cents from April 27 to May 4 to reach $2.205. July slid 8 cents to $2.24, the balance of summer (July-October) dropped 11 cents to $2.20 and the winter 2018-2019 fell 6 cents to $2.87, according to Forward Look.

Losses cut even deeper across the northern border into Canada, where AECO forward prices plunged on the heels of negative pricing in the spot market on Thursday. Day-ahead prices at AECO averaged C17 cents/GJ, including trades as cheap as negative C5 cents/GJ.

Using NGI price data, Genscape analyst Rick Margolin calculated that AECO basis had already reached a 106-day low on May 2, when prices there traded as low as C18 cents/GJ on the way to averaging C23 cents/GJ.

“Prices could be even lower except Alberta production has backed off slightly,” with Nova Gas Transmission system field receipts slipping “below the 12 Bcf/d mark for the first time since early February when maintenance and freeze-offs hit production,” Margolin said. “Spring breakup is now underway with winter temperatures having finally departed the province.”

Meanwhile, demand in the region has seen a small increase “with turnarounds at two oilsands facilities wrapping up” and helping to offset warmer-than-normal temperatures in the province, according to Margolin. “But those near-term support factors have only slowed the price declines. Prices are still weighed down by strong year-on-year production, shoulder season demand and limitations on injections for maintenance.”

Like the United States, Alberta is entering the storage injection season at steep deficits to historical levels. In terms of inventories, the province got its first build of 2018, adding 4 Bcf to storage during the week ending April 27, TPH analysts said, noting their projection of a 3 Bcf build. “We’re looking for a 4 Bcf build again” next week (for the week ending May 4), “and then things get really interesting.”

Since May maintenance kicked off, field receipts have dropped by 0.5-0.8 Bcf/d as pipe congestion and price induced shut-ins limit supply. However, exports have only dropped by 0.2-0.3 Bcf/d, resulting in a tightening of the supply/demand balance, TPH said. “Ultimately, this tightening gets reflected in storage numbers, and current flow data suggest weekly builds of just 1.5 Bcf.

“We don’t want to extrapolate a two-day trend across two months, but we’ll be watching this trend closely because if it continues, today’s nickels and dimes are likely to become loonies and toonies in the second half of 2018,” TPH said.

Margolin said an average of 782 MMcf/d will need to be injected to reach the Oct. 31 five-year inventory average. “But injections only began in earnest in mid-April. Since then, injections have averaged just 321 MMcf/d, with just two days higher than the target daily injection rate.

“Hitting that target this summer will be made challenging due to maintenance-induced restrictions on injection capacities on the Nova system, suggesting further headwinds for AECO prices.”

AECO July forward prices tumbled 19 cents from April 27 to May 4 to reach just 49.1 cents, while July dropped 14 cents to 72.3 cents and the balance of summer (July-October) fell 11 cents to 85 cents, Forward Look shows.

Forward Look prices are in US$/MMBtu for all points, including those in Canada.