After two days of discussion at the 3rd Mexico Infrastructure Projects Forum in Monterrey, Mexico, the role of natural gas has emerged as a bit of a problem child, albeit an important part of the nation’s ongoing energy reforms. 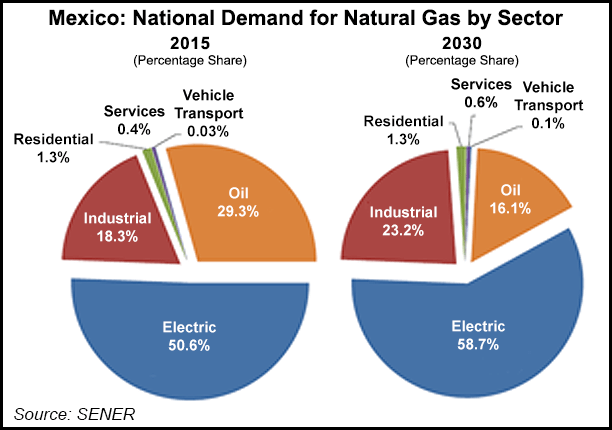 Speaking at the information-heavy conference, which featured 10 different panels of experts, representatives for the government and the private sector made it clear that U.S. gas supplies will continue to be a key part of the Mexican reform landscape. They said building new and expanded infrastructure and keeping it fully utilized is the immediate goal, recognizing that fossil fuels ultimately are only a transition to a totally clean fuel world.

David Madero, director general at Centro Nacional de Control de Gas Natural (Cenagas), told the audience that his nation’s biggest challenge is “keeping gas demand high,” because in the near future Mexico will have a lot of excess capacity.

Madero and other speakers were optimistic that more long-term transportation contracts will emerge this year, along with price reporting, more widespread tariff setting and resolution of rights-of-way issues that stalled the completion of at least five new pipeline projects in 2017.

Noting that creating more certainty in Mexican energy markets is critical, Madero outlined plans for 2018 at Cenagas, including renewing existing transportation capacity contracts and holding an open season in the spring for new contracts, all of which will kick in July 1. At the same time, up to 2 billion in pesos of interconnection work is underway that he said will enhance existing pipelines, increase capacities, and raise pressures and flows.

Import capacity into Mexico is expected to reach 14 Bcf/d in 2019-20, according to James Fowler, editor of the U.S.-based ICIS Mexico Energy Report and a panel moderator. He referred to data indicating the current import capacity is slightly more than 10 Bcf/d, but less than 5 Bcf/d on average is being used.

David Rosales, director general of natural gas and petrochemicals at the national energy ministry (Sener), said ultimately the market will determine what pipelines are built. Rosales said the national oil company, Petroleos Mexicanos (Pemex), and others will be allowed to compete, noting that 24 different companies have reserved pipeline capacity from Cenagas.

Rosales sees demand for natural gas continuing to grow, driven mainly by the electric power sector, and that more distribution and transmission infrastructure is needed for increased penetration of gas use, particularly in the southern end of the country.

Collectively, Cenagas, Sener and the Comision Reguladora de Energia (CRE) are addressing five areas opened up by the market reforms, Rosales said. These are:

Rosales said the increasingly abundant capacity of U.S. gas imports needs to be more directly available to end-users in the future. By the end of February, Rosales said Sener hopes to have a new system for closer coordination with state and local governments throughout Mexico to stimulate more economic development programs in states and cities.

“The market for gas is still in the developmental stage, and we are looking for more input from industry and the general public,” Rosales said, adding that increased use of natural gas as a transportation fuel may result from this effort.