A whopping list of challenges is confronting the U.S. natural gas industry as state and federal policies evolve and consumer preferences change, the CEO of BP Energy Co. said Tuesday. 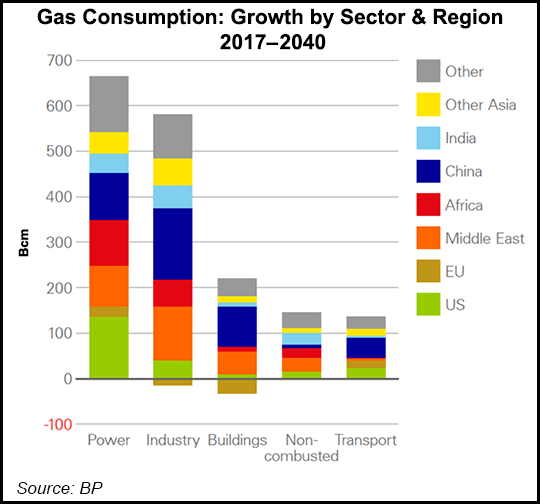 Orlando Alvarez offered some pearls of wisdom to an industry crowd during his keynote luncheon speech at the Gulf Coast Energy Forum in New Orleans.

Alvarez, who also chairs the Natural Gas Supply Association, said the industry needs to stand as one to “advance the positive message of natural gas,” as Lower 48 pipeline infrastructure requests face public pushback and the call to increase renewables in the energy mix grows louder.

“Every fuel has a future, and natural gas has positive attributes, but we are not doing a good enough job of getting the message out there,” he told the audience.

The industry faces a wall of opposition coming in many directions, with a baker’s dozen of fierce challenges from legislation, environmentalists, regulators and the courts.

Alvarez offered a lengthy list of issues confronting gas operators. For example, the Green New Deal espoused by some Democrats and Independents would transition the U.S. economy to become a neutral emitter of greenhouse gas (GHG) emissions.

In addition, more investors are demanding environmental, social and governance, i.e. ESG, changes, pushing for companies to be more transparent in their efforts to improve the environment. The gas industry also faces constraints from the Trump administration’s desire to provide subsidies to the coal and nuclear industries, as well as the administration’s desire to shift to states much of the responsibility for regulating carbon dioxide emissions from power plants, potentially opening the door to increased coal generation.

High on the list of pushback is environmental opposition to pipeline buildouts tied to federal Clean Water Act permit authorizations and environmental concerns, Alvarez noted. In the Northeast, the Atlantic Coast, Mountain Valley, Northern Access, Northeast Supply Enhancement, PennEast and Constitution gas pipeline projects have been delayed or derailed by a litany of lawsuits and regulatory issues.

“We at NGSA said what authority does the state have to do that?” Alvarez asked. Now groups are moving to block rigs on public land, fighting against eminent domain and challenging proposals under the Endangered Species Act.

“Big forces are behind challenging the infrastructure buildout in the United States,” he said.

In addition, many financial institutions and other groups are dropping their fossil fuel investments.

BP’s top strategic priority for the past few years, Alvarez said, is a dual challenge: produce enough energy resources to serve the world’s growing population, while at the same time reducing GHG emissions. Pointing to BP’s most recent annual Energy Outlook, which offers a forecast to 2040, Alvarez said oil and gas is not going to disappear.

The world’s population is expected to grow to 9 billion people by 2040 from about 7.5 billion today. At the same time, BP considers climate change to be real, and its business strategy is aligned with the 2015 United Nations (UN) climate change accord, aka the Paris Agreement, to keep global temperatures from rising 2 degrees C above pre-industrial levels. The threshold is generally thought of as the point past which the most severe effects of climate change would occur.

GHGs “need to fall by 50% by 2040 to be on track to meet the UN climate goals,” Alvarez said. “It is not a race to renewables. It is a race to lower carbon emissions. It cannot be all about renewables.” Together, renewables and natural gas will make up about 85% of the energy growth by 2040, with gas growing faster than oil or coal, and renewables rising to 14% or more of the energy mix.

For BP, reducing GHGs are “critical,” Alvarez said. Forty percent of BP’s global emissions are from the Lower 48 operations, now housed within Denver-based BPX Energy. “We have to get it down.”

The London-based operator has undertaken several initiatives to build its alternative energy arm and reduce methane emissions across the globe, but “every company, every person, every government has a responsibility” to do the same.

However, the industry is facing headwinds, led by an uncertain regulatory environment in the United States. A “spider web” of pipelines moving oil, gas and natural gas liquids is being installed to move supply in every direction in an unprecedented wave of infrastructure.

“The optionality we’ve built has been tremendous, but I will tell you, it hasn’t been easy,” Alvarez said. “And we have to keep monitoring this” because opponents of gas pipeline projects continue to run interference in state and federal courts.

At the same time, different parts of the country are undergoing changes within their generation capacity mix, Alvarez noted. Coal generation is being replaced by gas in the PJM Interconnection grid on an almost 1:1 basis. There is little wind or solar being added in the Northeast, however.

For the California Independent System Operator, “it’s all been about solar,” Alvarez said, with 8.8 GW of solar built in the state since 2013 and another 6 GW underway. In the Electric Reliability Council of Texas, which serves the grid for most of the state, “it’s all about wind,” with 15.5 GW of new capacity since 2013.

The grid changes have been driven by renewable portfolio standards (RPS) adopted in 29 states across the country. Seven states now have RPS standards that mandate 100% of their electricity come from alternative standards by a certain date.

What does this have to do with gas? For businesses and consumers, it’s a tricky business, said the BP executive.

“These state mandates are coming, and they are coming fast.”