Imported natural gas will continue to be a growing part of the energy mix in Mexico despite calls from the new government of AndrÃ©s Manuel LÃ³pez Obrador to reengineer the sector, according to a range of opinions shared at Industry Exchange’s 4th Mexico Infrastructure Projects Forum in Monterrey, Mexico Jan. 16-17. 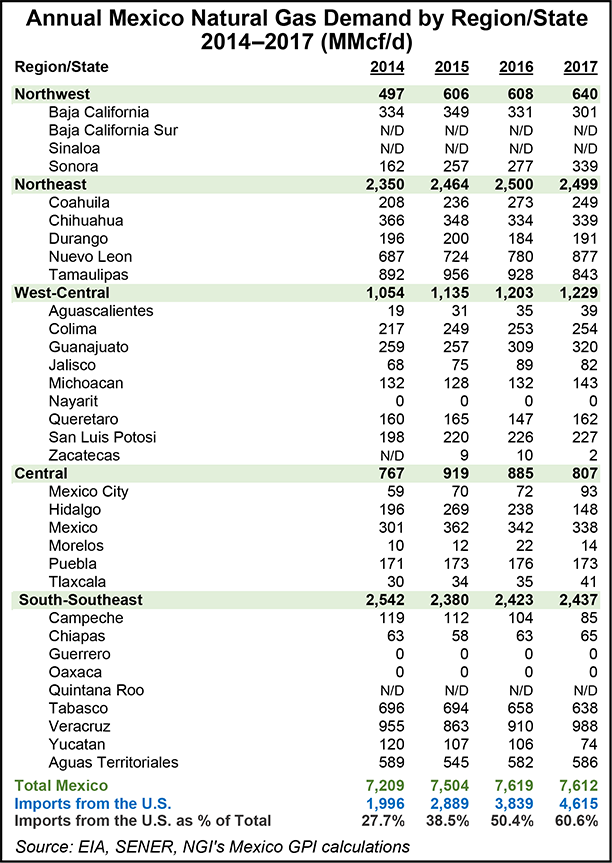 “We think that the natural gas market in Mexico has very strong fundamentals,” said JosÃ© GarcÃ­a Sanleandro, CEO of Gas Natural MÃ©xico (Naturgy Mexico), the local subsidiary of Spain’s Naturgy Energy Group. “I think there is a great opportunity here. There is cheap gas available and I think the amount of pipelines provides reliability to the system.”

Sanleandro points out that the current challenge resides in “the final mile” to the residential consumer in Mexico, where there is considerable room for growth. Only 6.2% of homes in Mexico have access to natural gas, while some 19,000 cars use natural gas, or just 0.01% of the vehicular park, he said.

“Getting distribution rights to final clients is almost impossible. The permitting process is problematic. This needs to change,” he said, adding that there is higher GDP growth in Mexican states with access to natural gas, compared to those without.

Mexico will see annual electric demand growth of 3.1% for the next 15 years, said Enrique Alba, the country president and CEO of Spain’s Iberdrola, the leading private-sector power generator in Mexico. This figure is above the average projected rate of 2.4% per year suggested by Energy Ministry (Sener) in its 2018-2032 Prodesen power sector outlook last year.

This means that 67,000 MW of new capacity is needed to meet demand in this timeframe.

“In Mexico the natural gas market and the electric power sector go hand in hand,” he said. “Planning both must happen together,” he said, adding that in an ideal world 50% of new power should come from gas-fired generation and 50% from renewables.

“We’ve done a lot in the last five years but the redesign continues,” Alba said. “This is a region with an abundance of gas at competitive prices. Combined cycle generation needs to be a reality as baseload power.”

Despite calls by the LÃ³pez Obrador government to slow imports of natural gas from the U.S., Darrel Thorson, the VP for Business Development at BP Energy Co., thinks Mexico remains attractive for U.S.-based gas marketers. BP plc is — and has been for years — the largest natural gas marketer in the United States and Canada, according to NGI‘s Top North American Natural Gas Marketers ranking, which is done quarterly.

“As a commercializer, we make sure there is molecule at the gate regardless of the political reality,” Thorson said. “On balance people are looking to increase production, add lines of production, add jobs. So it feels like Mexico is in a good spot. It seems like the fundamentals for Mexico are constructive. As a marketer, our job is to make sure the molecule gets there. And it feels like the environment is there for that service.”

In terms of industrial gas needs, the perception is that U.S. imports will remain significant so long as they remain cost-efficient and Mexican natural gas production continues to fall below the needs of the market.

“For us, the most important thing is getting the molecule that is competitive,” said Gerardo Rojas, the energy strategy developer at steel producer Ternium MÃ©xico. “It doesn’t matter where it comes from.”

Sanleandro agreed. He said “right now we have guaranteed supply at the right price. If that stops being the case, then we will have to change.”

In 2010, Mexico imported only 0.8 Bcf/d from the U.S., according to analysts at Raymond James. Raymond James sees this figure jump to 6.2 Bcf/d in 2020. The LÃ³pez Obrador government aims to increase domestic gas production by 50% in six years, but gross natural gas production in Mexico has fallen by about 42% since peaking at 6.52 Bcf/d in 2009, according to data from state oil company PetrÃ³leos Mexicanos.