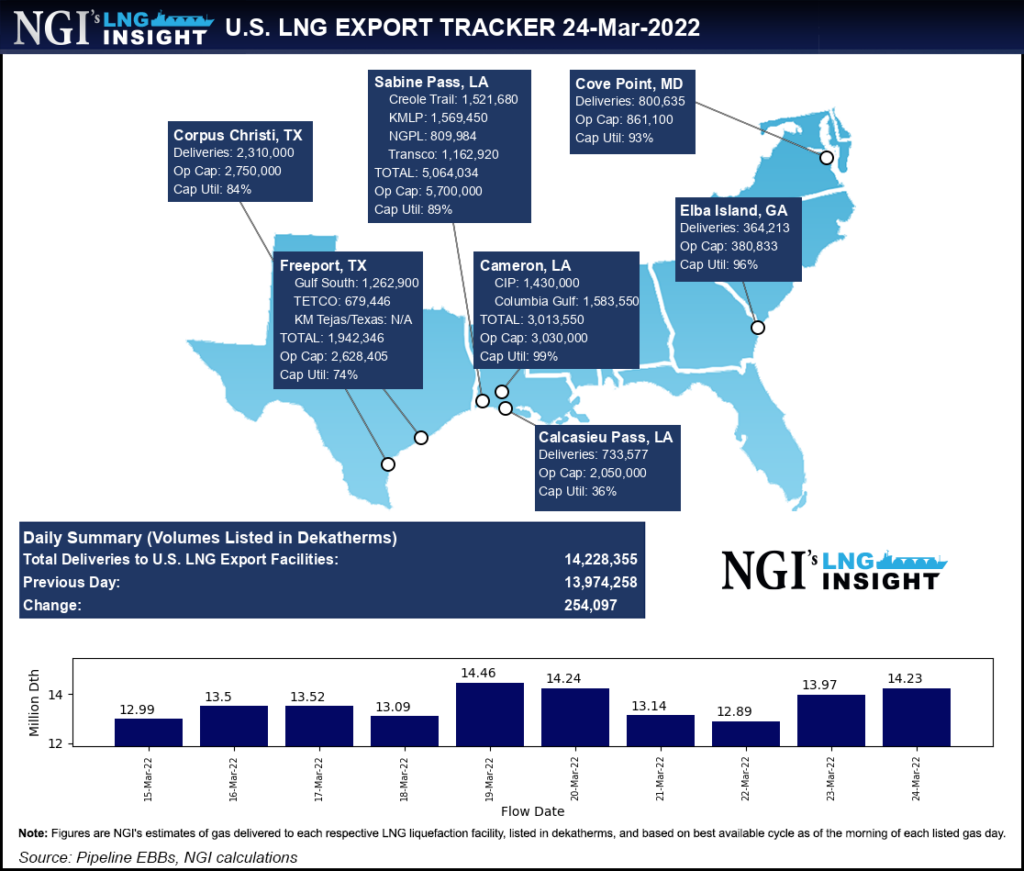 President Biden reportedly was due to make an announcement Friday during his trip to Europe. The president was in Europe to coordinate with allies “on all aspects of our response to Russia’s war against Ukraine, including imposing further severe costs on those enabling President Putin’s war of choice,” the White House said.

Department of Energy (DOE) Secretary Jennifer Granholm told reporters on Thursday that with regard to increasing LNG supply to Europe, “I’m going to allow the president to make that announcement, and that [will] be soon. With respect to oil supplies, we have called for an increase in our domestic oil supplies.”

The UK’s U.S. Ambassador Karen Pierce also said Thursday during an interview on MSNBC that the UK was “working with the Americans to get more LNG into Europe…We’ve come to an arrangement with the Port of Baltimore,” in Maryland. “Our trade secretary was there recently. The LNG terminal in Baltimore will ship more LNG to the UK, and we’ll ship it onto Europe.”

Pierce did not specify whether she was referring to the Cove Point LNG terminal in Lusby, MD, owned by Dominion Energy Inc. and Brookfield Asset Management. There are no other LNG export terminals in the region.

“We will deepen our cooperation towards a net-zero energy transition, including by taking concrete steps in our energy cooperation to enhance security of supply and work to eliminate the EU and its Member States’ dependence on Russian energy,” the leaders said jointly on Wednesday. “A dedicated working group on green transition and LNG is being created to develop a concrete action plan on these matters, and our officials will meet this week to further discuss enhancing energy-related cooperation.”

Rystad Energy analyst Vinicius Romano said Thursday, “The market is keenly looking for direction from the meeting between the European Council and U.S. President Joe Biden, where a phase-out plan to reduce EU energy dependence on Russia, EU energy security, and energy affordability will be discussed.”

Romano added, “Europe will have to choose between reaching its 80% storage target by Nov. 1 this year or expressively cutting Russian imports in 2022.

“Achieving both would be a challenging goal to reach this year.”

How Many LNG Projects Are Pending Approval?

The U.S. natural gas industry, meanwhile, is urging the Biden administration to accelerate the approvals of pending infrastructure projects to shore up global energy security.

However, “significant work remains to achieve your administration’s goal of ensuring that natural gas supply can keep up with domestic and global demand,” the lobbying groups said. “In addition to encouraging supply increases to meet today’s challenges, it is also essential to ensure that there is adequate natural gas infrastructure — including LNG terminals and pipelines — so natural gas supply can reach those who need it the most both at home and abroad.”

“While we were encouraged by DOE’s recent actions to expedite approval of two applications to increase volumes at currently operating LNG facilities, we urge you to also push for expedited approval of the remaining pending applications at FERC and DOE, and with other federal permitting agencies; thereby allowing the United States to continue strengthening its powerful global position on energy.”

The energy organizations also highlighted the essential role of natural gas in the energy transition. “Research has shown and experts agree that as we continue on our path to a lower emissions future and aim for net-zero emissions by 2050, natural gas will play a critical role in meeting those targets,” they said.

“Not only does natural gas generation support growth of intermittent renewable resources, it can also ease rising costs for consumers while guaranteeing reliable energy they need and want through this transition. The expedited approval of these natural gas pipeline, storage, and LNG projects, along with continued investment in the production of natural gas, are vital as we work towards the cleaner energy future we all want while continuing to support our allies as the war in Ukraine rages on.”

Granholm’s comments on LNG followed a meeting in Paris of the energy ministers of the International Energy Agency (IEA) member countries. On Thursday, she shared the stage with IEA executive director Fatih Birol.

Birol addressed demands from Russian President Vladimir Putin that “unfriendly” countries start paying for Russian gas in rubles. Birol said “if it is true, I would consider it one of the other security threats made by Russia. “This may factor into the Kremlin’s thinking as this will create an impetus to remove part of the sanctions or make them milder.”

As for the oil markets, IEA member countries in early March agreed to release 63 million bbl of oil from their collective storage inventories in order to ease the impact of sanctions on Russian oil exports.

Birol said member countries are “immediately ready to act and release additional volumes to the markets.” He added that the 63 million b/d release represented “only 4% of all the stocks we have.” All IEA member countries proposed different policies with different timelines, but with “one single target  – reducing radically Russian oil and gas exports.”

Rystad’s Romano said that “it is unlikely that alternative currencies will be implemented in existing contracts. Requiring payments in rubles will force Western companies to negotiate with sanctioned banks.