Natural gas futures pulled back Tuesday after mid-range heat forecasts eased slightly and a new outlook called for record production on the horizon, ending a rally that had been fueled by sizzling summer heat. The August Nymex gas futures contract settled at $7.264/MMBtu, down 21.5 cents day/day. September fell 23.2 cents to $7.150. 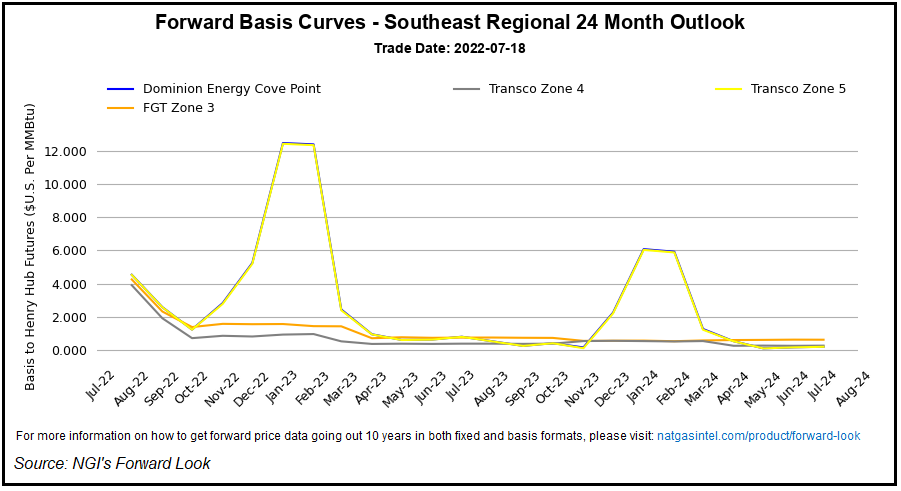 The prompt month had gained nearly 88 cents over the two previous regular trading sessions amid widespread high temperatures in the 90s and 100s.

“The overnight data did back off slightly on the amount of heat across the northern U.S. for the seven- to 15-day period,” NatGasWeather said Tuesday.

Both the American and European weather models shed three cooling-degree days (CDD). Still, intense heat is expected to permeate most of the Lower 48 through July and into next month, the firm said.

Meanwhile, Rystad Energy analysts said in a report Tuesday that they forecast U.S. natural gas production would climb to an all-time high in the coming months, topping 100 billion Bcf/d and helping to meet robust global demand amid scorching summer temperatures and supply shortages in Europe.

Rystad noted the demand has fueled prices surges and galvanized producers in the Haynesville and Appalachia regions to invest in growth. This is paired with expected increases of associated gas volumes from the Permian Basin, the firm said.

Rystad’s projection surpasses the official growth expectation of the U.S. Energy Information Administration (EIA). The agency has called for output to approach 100 Bcf/d in 2023.

Notably, the Freeport LNG outage that followed an early June fire cut U.S. export capacity by about 2.0 Bcf/d through at least early fall. This affects U.S. exporters’ ability to meet European liquefied natural gas demand, in particular. Calls from Europe are robust amid Russia’s war in Ukraine because of efforts on the continent to minimize reliance on Kremlin-backed gas.

American LNG export volumes have held comfortably above 11 Bcf/d throughout July, keeping U.S. facilities, aside from Freeport, operating near capacity.

In the near term, however, production has proven choppy.

U.S. output estimates from Wood Mackenzie on Tuesday showed a roughly 2.1 Bcf/d day/day decline, with total output down to around 95.4 Bcf/d.

The weaker output coincides with various short-term pipeline maintenance events in the region, according to the analyst, and upward revisions “are expected” this week.

Physical gas prices advanced again Tuesday – though not as much as Monday’s $1.145 surge – as hubs in the East continued to accelerate.

National Weather Service (NWS) data showed hot high pressure covering much of the West and central United States early this week, with forecasts calling for such conditions to expand to the East over the next several days.

Temperatures are expected to be hottest in the Southwest deserts and parts of Texas – approaching or eclipsing 110 degrees at times – but highs in the 90s or higher are likely to span the Plains, Midwest and much of the East this week, according to NWS forecasts.

AccuWeather’s Alex Sosnowski, senior meteorologist, noted that the Interstate 95 corridor of the northeastern United States has largely escaped the worst of the July heat. But that is expected to change.

“The building heat will bring a prolonged stretch of 90-degree temperatures to several major cities that have not experienced many prolonged heat waves so far this summer,” Sosnowski said, including major markets such as Philadelphia, New York City and Boston.

He said the jet stream pattern helps to safeguard the Northeast from the bouts of 100-degree heat that have dogged much of the Lower 48 and, more recently, western Europe.

Still, “locations in the Interstate 95 corridor from Virginia to Massachusetts will significantly add to their number of 90-degree days this week and perhaps right through next week,” Sosnowski said. “Temperatures will average 5-10 degrees above normal, following near-average temperatures for most days since early June.”

This would come on top of the hit to production in the region this week.