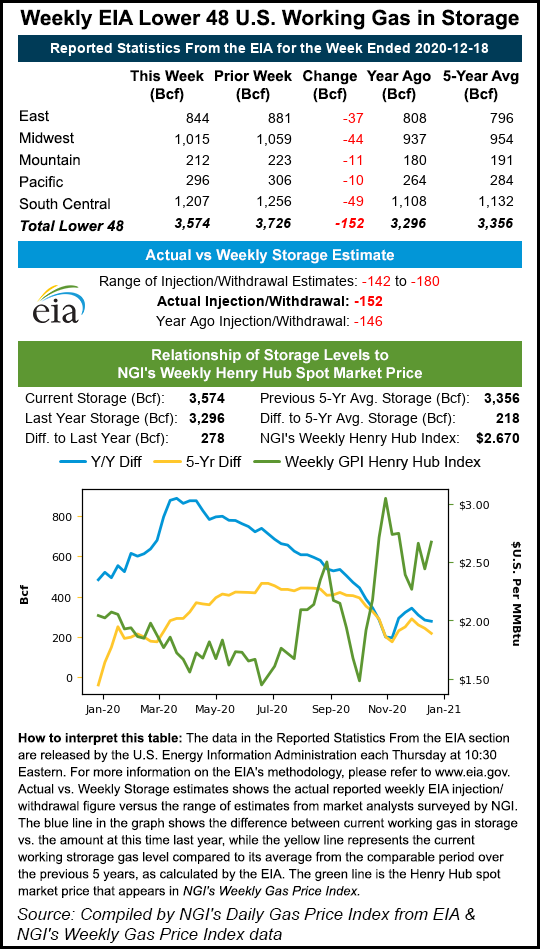 After showing a warmer outlook earlier in the week when compared to the European weather model, the American Global Forecast System (GFS) trended colder overnight into Wednesday and added 15 heating degree days (HDD), according to NatGasWeather.

The European model, however, shed eight HDD, bringing it close to the GFS.

“Prices gained overnight on the colder-trending GFS, then sold off after the European [model] disappointed on warmer trends,” NatGasWeather said.

“The coming pattern is still better than it’s been much of the past two months,” the forecaster added, but with the European data “teasing colder systems yesterday and then backing off today, it’s clearly led to disappointment.”

Additionally, the firm noted that trading opened with news that Lower 48 production was up nearly 1 Bcf compared to last week’s 91 Bcf/d. With weather-driven demand dubious, rising output “could be viewed as quite disappointing.”

Liquefied natural gas (LNG) levels, meanwhile, remained strong at around 11.4 Bcf Wednesday, according to NGI data. But news media reports of LNG cargo cancellations for February injected some added skepticism for futures traders. Bloomberg reported market rumors of several U.S. cancellations for February, though a lack of shipping availability and aggressively high charter rates were cited as reasons, as opposed to waning demand.

The U.S. Energy Information Administration (EIA) then released its latest storage assessment at Noon ET, reporting a withdrawal of 152 Bcf for the week ended Dec. 18. The result was bullish compared to a year earlier, but it fell short of market expectations for a pull of 159-160 Bcf.

The prompt month was down about 9.0 cents a few minutes ahead of the storage report and it sunk deeper after EIA’s release.

The latest withdrawal was more than the 146 Bcf pull recorded a year earlier and greater than the five-year average 127 Bcf withdrawal, according to EIA. Demand during the covered week was driven by a powerful storm that heaped snow and freezing temperatures on major markets throughout the Northeast.

The market, however, was expecting an even steeper pull. Prior to the report, a Bloomberg survey showed a median estimate of 159 Bcf decrease. A Reuters poll landed at a median withdrawal of 160 Bcf, while a Wall Street Journal survey found an average withdrawal expectation of 159 Bcf.

The latest withdrawal reduced inventories to 3,574 Bcf, though stockpiles were still above the year-earlier level of 3,296 Bcf and above the five-year average of 3,356 Bcf.

By region, the South Central withdrawal of 49 Bcf led all others. The Midwest and East regions followed with pulls of 44 Bcf and 37 Bcf, respectively.

While bearish views prevailed Wednesday, analysts noted that the depths of winter – and strong heating demand – lie ahead.

EBW Analytics Group, citing DTN weather data, said the 16-to-30 day outlook “suggests enduring warmth out West” but temperatures for the eastern half of the Lower 48 in line with 30-year norms. While the first half of that outlook leans warmer than normal, “tropical patterns suggest a moderately colder-than-normal mid-January.” What’s more, “extremely cold” conditions next month are possible “should the polar vortex splinter and dip into the Lower 48.”

Looking into January, EBW analysts said, “the trend will be significantly bullish in the weeks ahead. The market’s storage buffer has limited the impact of higher demand and fading supply. As storage surpluses turn to deficits, however, it is likely to spur a price response for the February and March contracts.”

Spot gas prices sputtered amid mild temperatures across much of the Lower 48, but stronger demand may be ahead.

NatGasWeather said national demand would likely remain modest Thursday as broad swaths of the country enjoy above-average temperatures with highs from the 40s to 70s. However, a blast of cold that pushed into the northern Rockies and Plains on Wednesday was expected to expand to other regions.

“Demand will surge Friday and Saturday as this frigid blast” with subzero lows “spreads across the Midwest, Ohio Valley, and Northeast,” the forecaster said. “Lows of 20s are also expected deep into the Southeast to aid strong national demand.”

Farther out, Brad Harvey, a meteorologist for Maxar’s Weather Desk, said the 6- to 10-day period could feature a pair of storm systems tracing across the United States, “bringing above-normal temperatures to areas in advance and below-normal temperatures in their wake.”

Overall, he said, temperatures in the period are expected to average “on the warm side of normal in the Northeast” but below normal in the interior West and the nation’s midsection.

Cash prices on Wednesday were led lower by declines in the Northeast.

Prices elsewhere were mixed and traded in relatively narrow ranges.