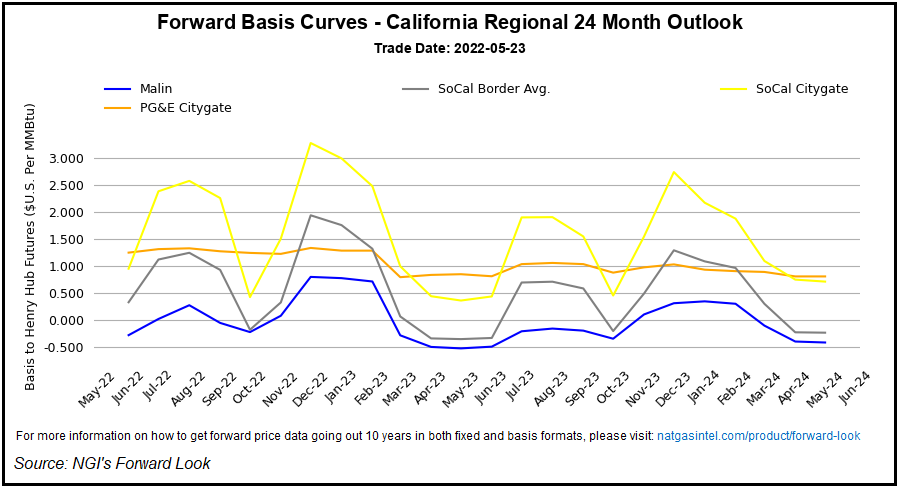 The July contract ticked up nine-tenths of a cent to $8.836 on Tuesday. June rolls off the books as the prompt month on Thursday after options expiration on Wednesday. Futures have typically proved volatile ahead of expiry this year.

LNG feed gas volumes topped 13 Bcf this week, building momentum back toward the 14 Bcf record level reached before spring maintenance season. European demand for U.S. supplies of the super-chilled fuel is steady as countries across the continent work to sever ties with Russia’s energy complex.

Domestic producers, meanwhile, renewed their struggle to ramp up for the summer following weeks of routine repair and upgrade work at their facilities. Output had topped 95 Bcf in estimates to start the week – near a recent high – but dropped back below that threshold on Tuesday.

Northeast volumes were showing a roughly 600 MMcf/d drop, primarily from Northeast Pennsylvania. Notable declines were also observed from the Permian Basin (down about 445 MMcf/d) and the Rockies (down around 175 MMcf/d), according to Munder.

With production light, market participants for weeks have cautioned that U.S. supplies could finish the summer precariously light, particularly if multiple forecasts for an exceptionally hot summer bear out.

Utilities injected 89 Bcf of gas into storage for the week ended May 13, raising stocks to stocks to 1,732 Bcf, the U.S. Energy Information Administration (EIA) said in its most recent inventory assessment.

Still, storage levels remain more than 300 Bcf below the year-earlier total of 2,090 Bcf and the five-year average of 2,042 Bcf.

The deficit to averages is expected to persist. Results of a preliminary Bloomberg poll showed a median expectation for a 92 Bcf injection for the week ended May 20. EIA issues its next print on Thursday.

A Case For Bears

A mixed weather outlook appeared to complicate trading early Thursday, NatGasWeather said, with mild temperatures spanning much of the North this week, offsetting heat elsewhere in the Lower 48.

The number of coronavirus cases is mounting in the United States, with more than 100,000 infections recorded daily in mid-May, according to the U.S. Centers for Disease Control and Prevention. Federal health officials said the true total is likely much higher because of home tests that do not make official counts.

With inflation soaring and interest rates rising, market participants also are increasingly concerned about both a U.S. economic downturn and a global recession.

However, NatGasWeather noted, cooling demand is king for gas markets during the summer months – and most meteorological signs point to robust consumption of natural gas to power air conditioners in the months ahead. The firm cited widespread expectations for “a hotter than normal summer” at the national level.

“The background state is still bullish,” the forecaster said.

Spot gas prices advanced, with the strongest gains in heat-drenched regions of the South and in California, where a festering drought has depleted hydropower and bolstered demand for natural gas.

NatGasWeather said there was a “cooler-than-normal weather system with heavy showers and thunderstorms” tracking across the Plains and east-central United States this week. The system ushered in highs from the 50s to 70s across swaths of the nation’s midsection.

Looking ahead, however, NatGasWeather said the southern and eastern United States “will warm into the 80s and 90s this weekend” after brief reprieves from recent heat waves, driving demand.

Maxar’s Weather Desk also projected warmer-than-normal temperatures from the Midwest to the East from Sunday through June 2.

“Low pressure tracks into the Midcontinent during the early stages of the period, separating a cooler air mass to its west from warmer conditions further east,” Maxar said. “…Above and much above normal temperatures are from the Midwest to the East, including peaks near 90 degrees in Chicago early next week and in the Mid-Atlantic during the second half.”

NOAA’s outlook for the 2022 Atlantic hurricane season, which extends from June 1 to November 30, predicted a 65% chance of an above-normal season, a 25% chance of a near-normal season and a 10% chance of a below-normal season. The forecast also calls for a range of 14 to 21 named storms, of which six to 10 could become hurricanes. An estimated three to six could develop into major hurricanes.