After testing some upside in overnight trading, natural gas futures reversed course once Monday’s trading session got underway. The initial rise in prices was attributed to cooler-trending weather models, which ultimately did little to alter the overall warm theme seen this fall. The November Nymex gas futures contract slid 22.0 cents to $5.345. December fell 20.8 cents to $5.502. 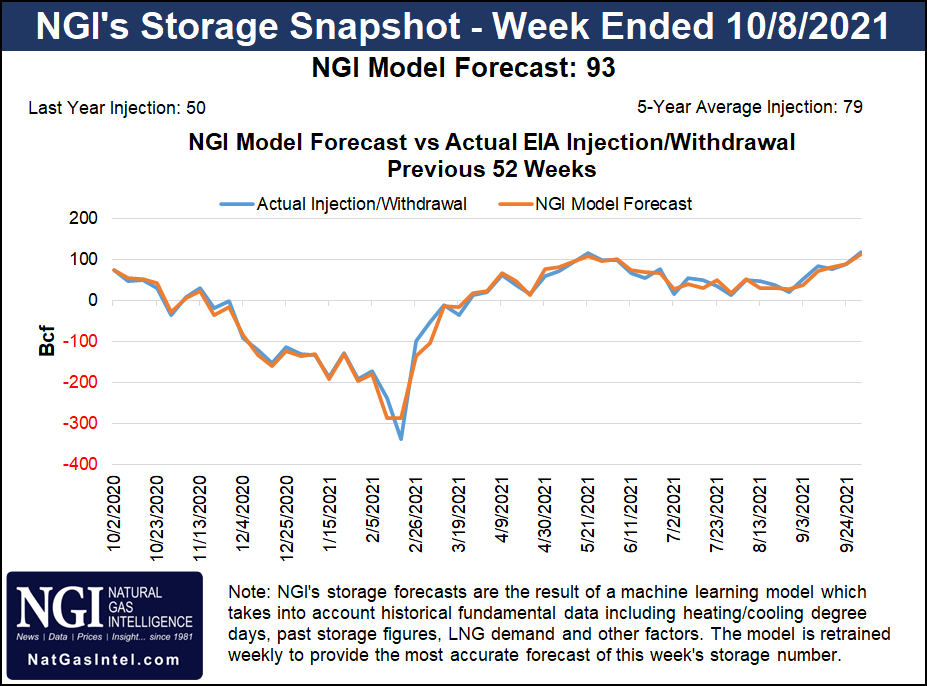 Spot gas prices popped a bit in the East and out West, though the rest of the country continued to see big decreases amid the mostly mild weather conditions in place. NGI’s Spot Gas National Avg. fell 6.0 cents to $5.065.

Much like the past month, volatility remained central to futures trading action at the start of the week. After spiking close to $5.800, the November Nymex contract plunged to a $5.308 intraday low before eventually bouncing back a bit.

The Schork Group pointed out that daily volatility last week averaged about 81%, which equates to an approximate one standard deviation daily price change of $2,924/contract. Schork analysts said the record high prices that have materialized over the summer and into the fall has meant that traders that hedged their European gas exposure in June must be “sucking wind today.”

The firm noted that natural gas hedge fund Statar Capital LLC reportedly took a $130 million hit through the first half of September. Media reports subsequently indicated that commodity traders Glencore plc, Gunvor Group Ltd., Trafigura Group Pte. Ltd. and Vitol Inc. also faced billions in margin calls on their short positions in the European and Asian markets, with some shops having to secure additional lines of credit and cut their positions to compensate for the volatility.

For example, since June, daily volatility on the Dutch Title Transfer Facility November contract has risen to almost 134% from only 35%, according to The Schork Group. This means that an approximate one standard deviation daily price change has exploded from $2,479/contract to $24,865/contract. A similar exponential increase in daily volatility has been observed in Asia.

“The paper sitting on the books of these traders are potentially staggering,” Schork analysts said in a note to clients.

The Schork team likened the fallout to an infestation of cockroaches, saying “when you spot one cockroach currying underneath the fridge in your kitchen, you know darn well there is a whole mess of the slimy little buggers camping out there.”

Though the forecast remains decidedly warm, weather is beginning to push its way back to the forefront of trading action. The cooler turn in the latest weather models reflected the lingering jitters some traders may still have about U.S. supplies ahead of winter.

NatGasWeather said the midday Global Forecast System was little changed for the front nine days but a touch cooler for days 10-13 in the East. Overall, it maintained a “comfortable” pattern over most of the United States for the next 15 days, besides areas of the West.

The forecaster said Pacific weather systems were set to bring valley rain and mountain snow this week to the West, then across the Midwest and Great Lakes this weekend and again Oct. 20-21.

“But with most of the U.S. in the comfortable 60s to 80s apart from these locally cooler systems, national demand will remain light into late October,” NatGasWeather said.

What also gives weather patterns a bearish lean, according to NatGasWeather, is that the American and European weather models both hold a warmer-than-normal upper pattern over much of the United States and Canada at days 13-16. They also tease that the warmth could last into the start of November.

“As we’ve been stating, the longer it takes for widespread hard freezes to arrive into the U.S., the better shape U.S. supplies will be at the start of the draw season and where the theme hasn’t changed since last week,” the forecaster said.

Already, Lower 48 storage inventories have tracked significantly higher in recent weeks thanks to the milder turn in the weather. Last week, the Energy Information Administration (EIA) reported the largest fall injection in a decade, a monstrous 118 Bcf build for the week ending Oct. 1.

The triple-digit increase trimmed the deficit to the five-year average to 176 Bcf, and estimates for the next EIA report are pointing to another larger-than-normal injection. NGI modeled a 93 Bcf build, which would compare to last year’s modest 50 Bcf increase in inventories and the five-year average build of 79 Bcf.

The weather maps may still have deep hues of orange across much of the country, but some cities out West are preparing for their first taste of winter. The arrival of first snow is expected in parts of Wyoming, Montana and Idaho, with winter weather advisories spread over a broader area including in parts of Colorado, Utah and Nevada. Snow was already falling across parts of Nevada, Idaho and Montana as of early Monday, according to AccuWeather.

Across the highest elevations of Montana, Idaho, Wyoming and Colorado, snow may be measured in feet rather than inches, the forecaster said. The most impactful wintry weather is still to come across the Intermountain West early this week, with the storm continuing to intensify into Tuesday, and snowfall intensity to begin picking up across the northern Rockies.

The chilly outlook boosted prices across most of the Rockies on Monday. Opal spot gas prices climbed 17.0 cents to $5.275.

Despite the stronger downstream demand out West, Permian Basin prices continued the downward trend it began late last week. Waha next-day gas plunged $1.095 to average $3.940, a similar slide to other West Texas points. The rest of the state, however, posted losses of 20-30 cents or so.

Midcontinent spot gas prices were mostly down less than 20 cents on the day, while prices farther east recovered a bit from last week’s lows. In Appalachia, Transco-Leidy Line cash jumped 39.5 cents to $4.485, and in the Northeast, Transco Zone 6 NY tacked on 36.0 cents to reach $4.625.