The U.S. Energy Information Administration (EIA) reported a 1 Bcf withdrawal for the week ending Nov. 27, coming in more than 10 Bcf below consensus for the reporting period that included the Thanksgiving holiday. 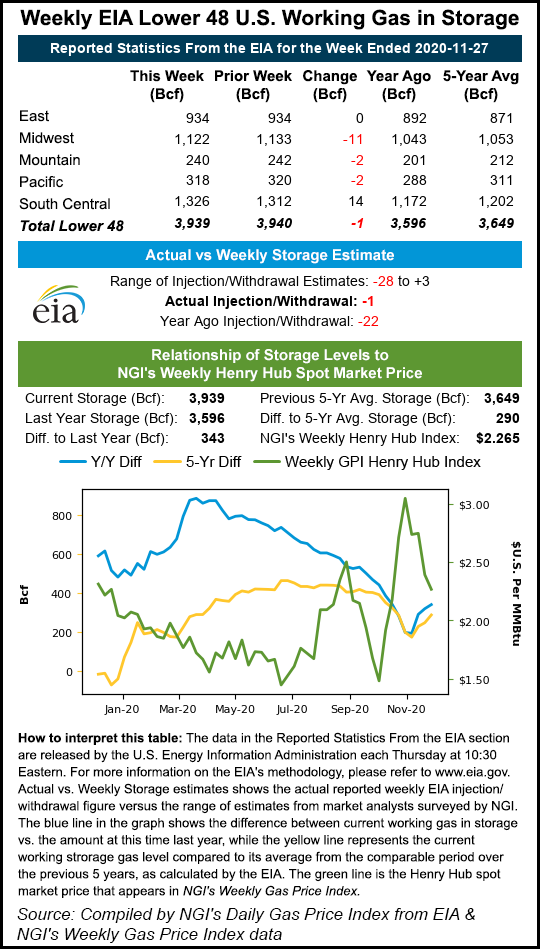 Natural gas futures already were sharply lower Thursday morning as the latest weather models dimmed hopes for mid-December cold. Ahead of the EIA’s storage report, the January Nymex contract was trading at $2.534, off about 25 cents from Wednesday’s close. As the EIA print crossed trading desks, the prompt month moved to $2.550 and by 11 a.m., it was at $2.564, down 21.6 cents day/day.

Participating on The Desk’s online chat Enelyst, Huntsville Utilities natural gas scheduler Donnie Sharp said, “The market is oversold, but not terribly so. Still got room to decline.”

Market observers were keenly aware of the trickiness in projecting this week’s storage draw given the Thanksgiving holiday. However, the pandemic and the impact of global gas demand have thrown other variables into the mix.

The EIA’s meager 1 Bcf draw indicates that weather-adjusted, the market is nowhere close to tight, according to several Enelyst participants.

Bespoke Weather Services chief meteorologist Brian Lovern agreed. The forecaster was looking for a draw around 18 Bcf and said “it appears there was just a good deal more holiday impact than we gave credit for.

“Balance wise, this number is very weak, even factoring in the holiday, but it is worth noting that we are seeing improvements in the data this week, suggesting that future numbers will be back tighter,” Lovern said. “This is supported by the current massive decline in prices as well.”

Ahead of the EIA report, a Bloomberg survey produced estimates that ranged from a 26 Bcf withdrawal to a 1 Bcf injection, with a median draw of 19 Bcf. A Reuters poll estimated a withdrawal as low as 28 Bcf and an injection as high as 3 Bcf, with a median decrease of 12 Bcf. A Wall Street Journal poll showed draws ranging from 8-28 Bcf. NGI projected a 15 Bcf pull.

Last week, the EIA reported a withdrawal of 18 Bcf for the week ended Nov. 20, while 22 Bcf was pulled last year and the five-year average stands at a 41 Bcf draw.

As to what the rest of Thursday may have in store for prices, Lovern said the market should consider that it is only Dec. 3, with plenty more time remaining in the winter season. “I, and most others, had a warm winter view overall, but I’m realistic to know the limitations of science and how much time there is for things to change.”