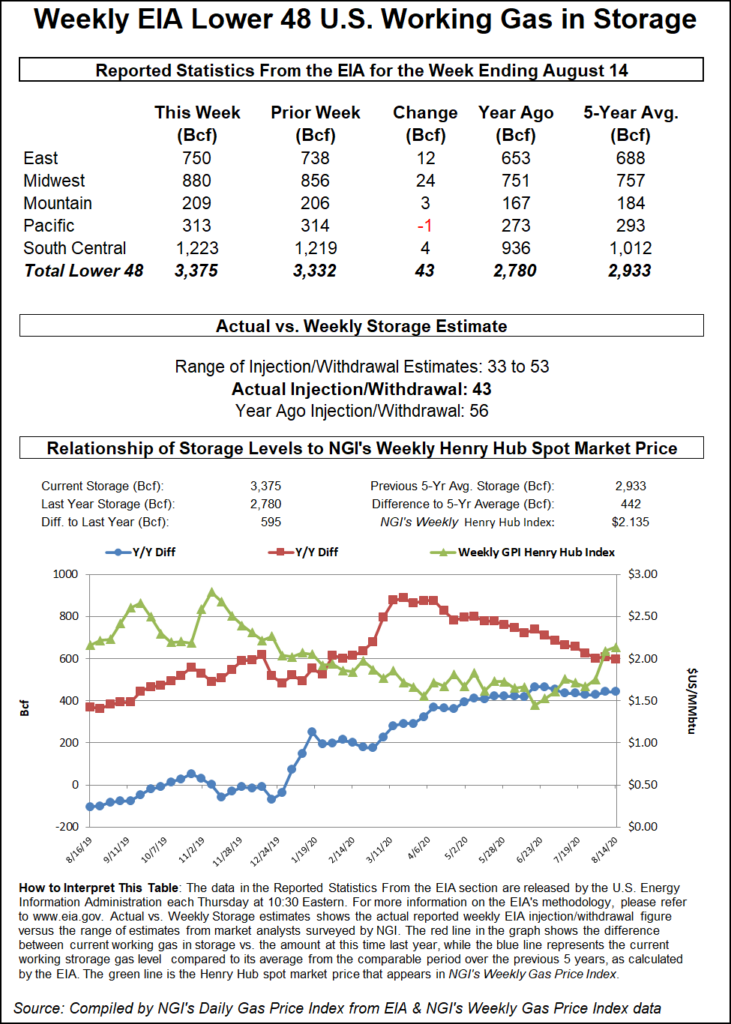 After pushing above $2.40/MMBtu, natural gas futures steadied a bit Wednesday as traders looked ahead to the newest government storage data for further direction. The September Nymex gas futures contract settled at $2.426, up nine-tenths of a cent from Tuesday’s close. October nudged 0.007 cents higher to $2.563.

Spot gas prices were mixed as the only pockets of strong demand were limited to the western half of the country. NGI’s Spot Gas National Avg. dropped 8.0 cents to $2.220.

The last couple of weeks in the natural gas market have been a whirlwind, with anticipation of rising export demand. Higher global gas prices have fueled a more than 60-cent rally at the front of the Nymex curve since the beginning of August.

Mobius Risk Group noted the gains have extended further out the curve as well, with 18 positive daily changes logged for the November 2020 Nymex contract since early July and 17 positive daily changes for November Title Transfer Facility (TTF) futures. Over that same period, there have been 11 down days for the November Nymex contract and 14 down days for the corresponding TTF contract.

“From start (July 7) to finish (Aug. 18), the November Nymex contract has increased by 51 cents and November TTF has moved up 38 cents,” Mobius said.

The linkage between the domestic natural gas markets at downstream markets in Europe is growing stronger, according to the firm. Furthermore, with the spread to Asia for the same delivery month at less than $2.00, the same could be said of the relationship between Henry Hub and the Japan Korea Marker (JKM). This is not a new dynamic, Mobius pointed out, as the collapse in Henry Hub earlier this summer was precipitated by an even sharper decline in the TTF/JKM destination markets.

However, “the importance of demand/storage dynamics in each locale will continue to have material impacts on Henry Hub prices, unless U.S. demand outstrips domestic supply by enough of a margin to require molecules bound for overseas markets to be recalled,” Mobius said.

“While core fundamentals will not tighten at 0.9 Bcf/d per week forever, as long as LNG exports continue to rise while production declines, natural gas prices are likely to remain on an upward trajectory,” EBW said.

However, there could be some bumps in the road. The EBW analysts said the current end-of-October storage trajectory nearing 4 Tcf may limit further upside, and any bearish catalyst, such as possible demand losses from brewing tropical storms, “may trigger a near-term correction.”

Indeed, weekly storage inventory data stands to be increasingly scrutinized in the coming weeks given the rapid pace of refills over the summer and the looming threat of containment ahead of winter. The Energy Information Administration (EIA) showed that Lower 48 stocks as of Aug. 7 were at 3,332 Bcf, which is 608 Bcf higher than this time last year and 443 Bcf above the five-year average.

For Thursday’s EIA report, to be released at 10:30 a.m. ET, analysts are looking for an injection in the 40 Bcf range. A Bloomberg survey of eight analysts showed injection estimates ranging from 36 Bcf to 48 Bcf, with a median build of 43 Bcf. A Reuters poll had a wider range from 33-53 Bcf with the same median build expectation of 43 Bcf, while NGI’s storage model predicted a 46 Bcf injection. Last year, EIA recorded a 56 Bcf build for the similar week, while the five-year average is a 44 Bcf injection.

Bulls are hoping to see some additional heat as the summer winds down. Any cooler shift in the outlook could lead to larger-than-average storage injections in the final two months of the injection season. Bespoke Weather Services said both the European and American weather models moved in the hotter direction overnight, though a large discrepancy remains between the two models over the amount of heat to be expected. Bespoke continued to view the European model as “too hot,” and said, at least for now, ensembles show less potential for tropical disruption than they previously showed.

“We remain on pace for a hotter August than we saw last year, thanks mostly to the record heat in the West, which has been strong enough to keep demand normal to above normal in recent days despite a more tame pattern in the eastern half of the U.S,” Bespoke said. “The West will finally cool into the final week of August, as some heat expands back eastward.”

Nevertheless, with numerous months of injections still to go, supplies remain on track to be near or over 4 Tcf by the end of the refill season, according to NatGasWeather. Last week’s build once again showed the supply/demand balance remains too loose and needs to tighten further if hefty surpluses are to be meaningfully reduced, the firm said.

It helps that LNG feed gas increased to 4.4 Bcf/d last week and 4.8 Bcf/d this past weekend, “but still needs to increase further to bring the supply and demand into balance.”

For the second day in a row, California’s power grid avoided rolling blackouts as power conservation measures combined with power imports and increased wind generation to lower demand. Loads ultimately fell short of the record that the California Independent System Operator had been projecting, peaking Tuesday at 47,697 MW. The previous all-time high established in July 2006 stands at 50,270 MW.

Meanwhile, Aliso Canyon withdrawals have continued for at least five straight days, according to Genscape, which “is the longest period of sustained Aliso withdrawals in over four months,” Bernardi said.

Pacifc Gas & Electric Co.’s (PG&E) sendout also is extremely elevated, especially for summer, according to the analyst. Total demand has topped the 2,780 MMcf/d mark twice so far this week. Only six other summer days in the past 10 years have had overall demand that high, Bernardi said. PG&E demand data showed that deliveries to the NonCore Electric generation class made up more than 50% of total demand for five straight days, which hasn’t occurred since July 2013.

Temperatures across California and the greater western United States were set to begin easing on Thursday, with spot gas prices throughout the region reflecting the lower demand for natural gas. SoCal Citygate tumbled 47.0 cents to $6.145, while farther north, PG&E Citygate fell 11.0 cents to $3.305.

Prices were mixed in the Rockies, with cash moving only a few cents in either direction across the region. In the Permian Basin, El Paso Permian next-day gas rose 9.5 cents to $1.760, a move that was in line with other market hubs in the region.

Kinder Morgan Inc. on Wednesday indicated that it would conduct a full investigation into the cause of a fire and natural gas release that occurred Tuesday on a transmission line on the El Paso Natural Gas (EPNG) system near Midland, TX. Spokeswoman Lexey Long told NGI that there is “positive information regarding the integrity of the pipeline based on recent tests. Consequently, one focus of the investigation will be on whether an outside force contributed to the incident.”

Kinder is working with customers on any impacts to service following the incident, and Genscape said only 105 MMcf/d of flows were being impacted, mostly from Targa Resources Corp.’s Midkiff processing plant in Reagan County, TX.

Meanwhile, EPNG rescheduled a key maintenance event that would restrict Permian exports by 189 MMcf/d. Beginning with a 40 MMcf/d reduction to operating capacity at the LINE2000 meter on Friday, further reductions of 224 MMcf/d would take place on Saturday and Sunday.

This reduction to operating capacity over the weekend would likely impact 190 MMcf/d of scheduled capacity out of the Permian based on a prior 30-day average, according to Genscape.

Analyst Matthew McDowell noted, however, that this maintenance event now coincides with planned maintenance on Kinder’s Gulf Coast Express (GCX), which is estimated to impact around 475 MMcf/d of capacity. The cumulative impact of both events is estimated to be roughly 515 MMcf/d on Friday and 664 MMcf/d on Saturday.Other notable price movers Wednesday were seen on the East Coast. Dominion Energy Cove Point spot gas was down 47.0 cents to $1.295, while Columbia Gas dropped a similar amount to $1.200. In the Northeast, Tenn Zone 6 200L cash fell 17.0 cents to $1.445.