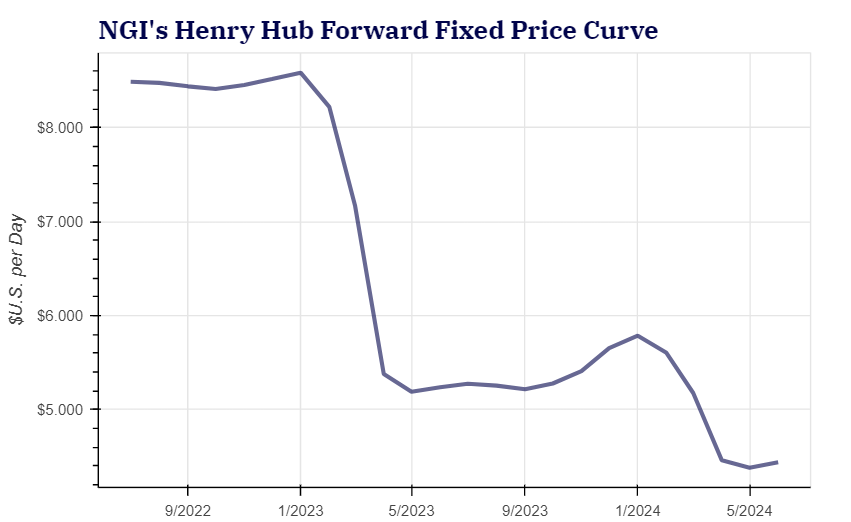 Spot gas prices retreated after several days in the green, with a moderate outlook for the three-day period through Monday. NGI’s Spot Gas National Avg. plunged 48.0 cents to $7.895.

With weather models trending slightly cooler for next week, it appears that Friday’s modest price rally was likely inspired by the ongoing digestion of the latest storage data.

The Energy Information Administration’s (EIA) 90 Bcf injection initially was viewed as bearish versus expectations and helped send futures tumbling on Thursday, but Bespoke Weather Services said the data “was not really bearish when stepping back and looking at the big picture.”

After all, supply/demand balances are still tighter than they need to be for the market to have “any true sense of comfort,” according to Bespoke. Furthermore, the weather pattern looks set to move materially hotter around the middle of the month, with gas-weighted degree days moving above normal by around June 13. Although wind output is expected to rise from recent lows, it should remain off the peaks seen in April and May.

“In our view, we would not be shocked to see prices test the highs again” over the next week, Bespoke said.

The Pacific and Mountain regions posted a cumulative build of 9 Bcf, which is 9 Bcf lower than the same week last year. Additionally, this was the ninth straight week in which there has been an increase in the year/year storage deficit, Mobius said.

In the South Central region, the weekly inventory report showed almost no change to the year/year storage deficit, which now sits at just over 140 Bcf. Notably, Thursday’s 20 Bcf net injection was inclusive of a 3 Bcf salt withdrawal.

“In order to have an adequate pre-winter inventory level, there will be a dire need to refill salt storage, which thus far is not occurring at a substantial rate,” Mobius said.

The Schork Group analyst team said “the future is now” for injections. They noted that the month of May is typically when the market sees the largest injection of the year. Storage builds then start to fall in June when air-conditioning demand begins to ramp up in the northern states and ease further as heat intensifies in July and August.

Looking ahead to the next EIA report, early estimates are pointing to a build in the high 90s or even low triple-digits. Assuming this stock increase comes to fruition, the cumulative injection for the month of May would be spot on the 30-year mean of 381 Bcf, according to The Schork Group.

“This is good,” analysts said, “but it is not good enough.”

Morgan Stanley Research analysts said the inventory shortfall is likely to persist into next winter. In backing up their theory, the analyst team, led by commodities strategist Devin McDermott, said that in order to refill inventories to “normal” levels – largely viewed by the market as around 3.7 Tcf – by the end of October, supply would need to average roughly 4 Bcf/d higher than current levels. This is an unlikely outcome, in Morgan Stanley’s view.

“Our refreshed base case, end-October inventory forecast is around 3.3 Tcf, about 10% below normal,” Morgan Stanley researchers said.

As such, prices should remain elevated and volatile. The analyst team noted that gas prices have now more than doubled year to date, with Henry Hub sitting at multi-decade highs.

“Assuming forecasts for warmer-than-normal summer weather hold, we see the potential for prices to reach $10/MMBtu in 3Q2022, roughly 15% upside versus the strip,” the Morgan Stanley team said.

Looking ahead, supply growth should become more evident in the second half of the year, led by the Haynesville Shale and Permian Basin, according to Morgan Stanley. At the same time, demand additions should slow as the buildout in liquefied natural gas facilities takes a pause; no new facilities are expected to start up until late 2024.

“As a result, we see some downside risks to 2023-24 futures. That said, we expect prices to remain elevated (and more volatile) relative to recent history – a setup more similar to the 2000s, pre the shale era, rather than anything over the last decade,” the Morgan Stanley analysts said.

Spot gas prices reversed gains ahead of the weekend, with what AccuWeather calls a “slice of nice” weather on the East Coast and mostly moderate weather elsewhere across the Lower 48.

AccuWeather said temperatures could be as much as 15-25 degrees lower on Saturday when compared to Tuesday in some Mid-Atlantic cities. New York, for example, recorded a high of 93 on Tuesday (May 31) but could see daytime highs top out in the 70s by Saturday.

“While the air coming in late this week and this weekend is not as crisp as some batches of cool and dry air from earlier this spring, it should be enough to bring many areas a comfortable weekend with little or no chance of rain,” AccuWeather senior meteorologist Alex Sosnowski said.

The exception is New England, which is forecast to remain cloudy and cool. After a weak storm goes out to sea in New England, a reinforcing shot of cool air is expected to spread into the Great Lakes and New York, which should send temperatures 5 to 10 degrees below normal for early June.

It’s not all cupcakes and rainbows in Texas, however.

AccuWeather said beginning Sunday, a northward shift in the jet stream would allow unseasonably hot air to push out of Mexico and seep into portions of the South Central states as well as the Four Corners region. The most intense portion of this hot air is forecast to settle over a large swath of Texas and remain in place through much of the early week, with temperatures in many places set to hit triple-digit readings.

“Temperatures will be more typical of the height of summer, rather than early summer,” said AccuWeather senior meteorologist Paul Walker. “The energy grid could be under stress with air conditioners and fans running consistently to try to keep people comfortable,” Walker said.

Despite the sweltering conditions on tap, spot gas prices continued to fall. Steep discounts were seen across Texas, with several locations slipping under the $8.000 mark. Houston Ship Channel fell 32.0 cents to $8.085, while El Paso Permian dropped 41.0 cents to $7.685.

Markets in the Midwest were down more than 50 cents at several locations. Chicago Citygate slid 53.5 cents to $7.975.