Intraday natural gas price volatility was on full display midweek as traders assessed the impacts of a substantial, though likely temporary, decline in export demand and the potential for a more moderate end-of-February following some of the coldest weather in years. After tumbling to a $2.741/MMBtu intraday low, the March Nymex gas futures contract bounced and eventually settled 7.6 cents higher at $2.911. April tacked on 5.6 cents to reach $2.879. 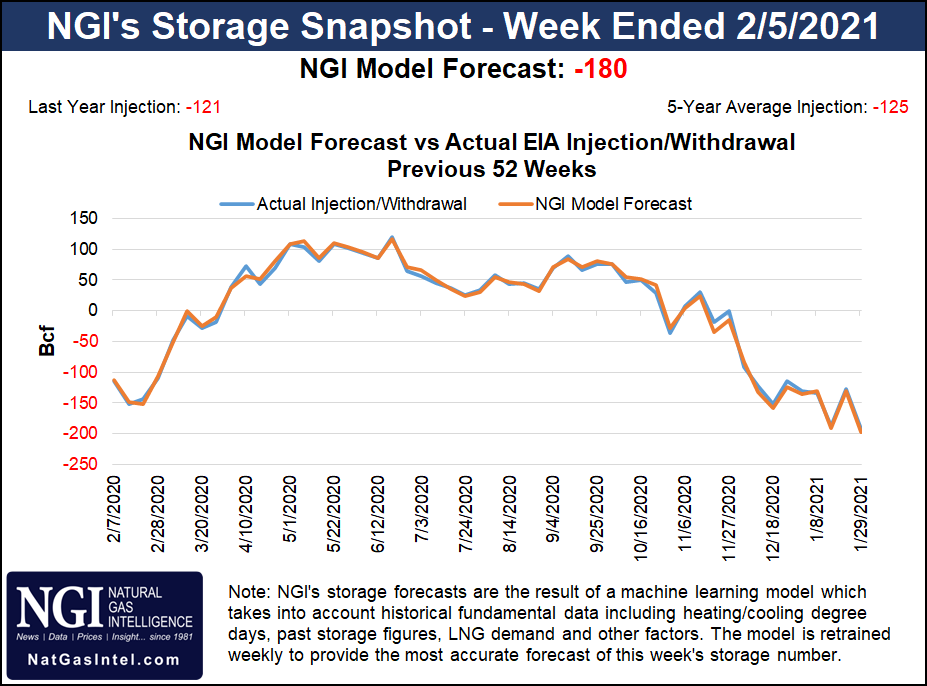 Weather model fluctuations are nothing new, but when it’s the dead of winter and a polar vortex has plunged into the Lower 48, gas traders take notice. So it’s no surprise that March futures trading has been erratic in recent days.

On Wednesday, the prompt month fell early as overnight weather models erased some demand from the 15-day outlook. Prices then bounced when some of that demand was added back to the midday forecast and went on to climb even further once the European model’s afternoon run not only recovered the demand it lost overnight but added significantly more to the outlook.

The March contract closed at the session high after dropping to $2.74. “So, now that prices are back to $2.90, is a return run to $3.00 possible?” asked NatGasWeather.

A move back to $3.000 may be more plausible if it weren’t for lower export demand. Ahead of the Arctic being pushed farther south into Texas, heavy fog has clouded the Gulf Coast much of this week. This has prompted many key ports and waterways to impose shipping restrictions because of visibility levels, according to Wood Mackenzie.

Liquefied natural gas (LNG) demand has steadily fallen since the start of the week, reaching 10.3 Bcf by Wednesday, off from 11.3 Bcf on Monday. Wood Mackenzie attributed most of the decline to Sabine Pass liquefaction facilities partially shutting down operations at the second production unit. There remains a moderate-to-high fog and visibility threat through Thursday; however, “current LNG inventory levels may help limit any further declines,” the firm said.

Meanwhile, on the supply front, the bone-chilling weather has had little impact on production, so far. With the bitter cold blast not yet fully piercing West Texas, wellhead freeze-offs in the Permian Basin have failed to materialize. That could change by the weekend, however, as AccuWeather showed overnight lows in Lubbock, TX plunging to zero by Sunday, with a chance for snow.

Freeze-offs also have not resulted in Appalachia, but Mobius Risk Group pointed out that a lack of drilling activity because of abysmal 2020 pricing has led to a steady decline in production so far this year from the December peak of just over 37 Bcf/d. In the near term, production could drop further from the potential freeze-offs in Appalachia, the country’s largest gas producing basin.

As the past seven winters have shown, including the famed polar vortex in early 2014, “it is evident that extreme temperatures can cause Appalachian production losses of 10% or more of total flowing gases,” Mobius said. “Applying such a loss to current production levels could result in a drop as much as 4 Bcf/d.”

Meanwhile, though production losses because of freeze-offs are temporary in nature, output isn’t always so quick to pop back. The potential supply loss following the current spate of freezing temperatures could work to further tighten an already structurally tight gas market.

On Thursday, the Energy Information Administration (EIA) is set to issue its weekly storage inventory report, with analysts expecting to see the year/year surplus possibly flatline or flip to a deficit. As of Jan. 29, total working gas in storage stood only 41 Bcf above year-ago levels and 198 Bcf above the five-year average, according to the agency.

EBW Analytics Group said its most-likely storage projections call for the storage week ending Feb. 18 to reach a 312 Bcf withdrawal — the second-largest on record — with the potential for widespread production freeze-offs sending the withdrawal even higher.

The firm said 1-2 Bcf/d of production freeze-offs is likely, but with extremely cold weather spanning every key production region in Appalachia, the Rockies, the Bakken Shale, SCOOP/STACK (South Central Oklahoma Oil Province and Sooner Trend of the Anadarko Basin, mostly in Canadian and Kingfisher counties) in Oklahoma, Haynesville Shale, Eagle Ford Shale and Permian, the potential exists for closer to 3-5 Bcf/d or more of declines.

While futures have continued to swing wildly but failed to sustain a $3 handle, cash prices on Wednesday launched some of the biggest gains in years, according to NGI. Many notable pricing hubs across the country traded around $4.000, while prices in the Midcontinent rose several dollars day/day to average around $6.000 to $9.000.

Southern Star spot gas soared $5.250 to average $9.295. The hefty increases come amid a stretch of “punishing” sub-freezing cold throughout the north and central United States, according to AccuWeather. The forecaster said daytime temperatures are expected to slide through next Monday, with the mercury barely reaching 8 degrees that day.

Meanwhile, Texas residents may have to trade in the flip flops for duck boots. Highs in West Texas have already started to fall, and AccuWeather showed overnight lows falling to zero by Sunday, with the possibility of snow. Even Houston was expected to receive some “wet snow, sleet and freezing rain from Sunday night to Monday,” the forecaster said.

To the east, benchmark Henry Hub climbed 48.0 cents to $3.675, which was in line with other gains in Louisiana and the Southeast.

NGI Senior Systems Engineer Nate Harrison noted that the widespread advances across U.S. cash markets on Wednesday were “some of the biggest jumps we’ve seen in years.” Spot gas was heavily traded on the Intercontinental Exchange, he said, with volumes coming in much stronger than what is typically seen, even in the winter months.

Appalachia prices bounced back from Tuesday’s lull, picking up anywhere from 36.0 cents to nearly $1.00 for gas delivery on Thursday. Texas Eastern M-3, Delivery jumped 96.0 cents to $4.505.

Similarly stout increases were seen across the country. In the Rockies, Cheyenne Hub cash rocketed $2.160 higher day/day to average $5.630.

Meanwhile, Westcoast Transmission said the Station 2 outage triggered by equipment failure, which has reduced its flow capacity by about 250 MMcf/d, could last anywhere from two to six weeks. California prices were strong as well, with SoCal Citygate climbing $1.375 to $4.970.