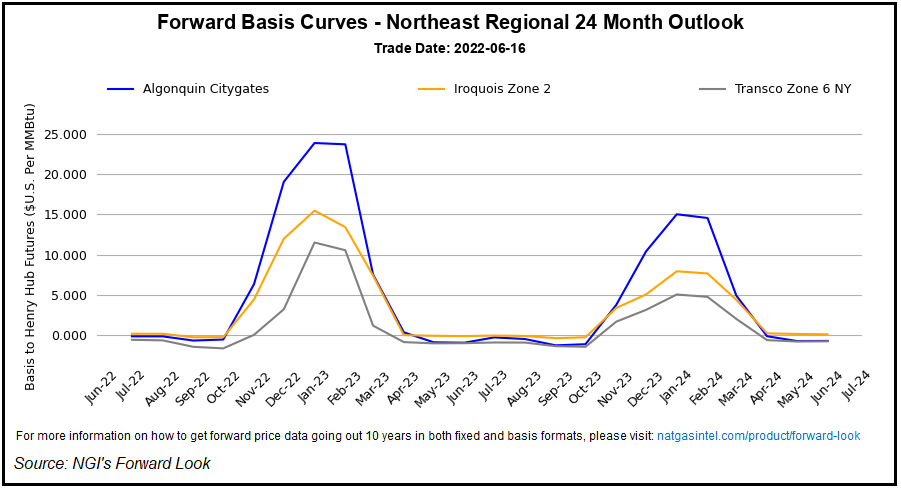 After a huge drop last Tuesday – more than $1.40 — on word that a key liquified natural gas (LNG) facility would remain offline through the summer, futures regained ground the next two days amid robust domestic and international demand. Traders, however, moved to the sidelines Friday, settling positions and avoiding further risk before the three-day break.

The backdrop, from both a bull and bear view, changed little during the trading day.

The June 8 explosion at the Freeport LNG export terminal, and ensuing announcement that exports from the facility will be offline for at least three months, continued to weigh on the minds of market participants. Freeport said LNG volumes from the terminal in Texas could be hampered until late this year. The developments are likely to enable utilities to put gas once destined for export into storage for next winter, alleviating supply concerns that had dogged the market this spring.

However, production on Friday held around 95 Bcf – near its average for the month and roughly 2 Bcf below what the Energy Information Administration (EIA) has projected could be the summer average.

At the same time, Bespoke Weathers Services said, forecasts point to a record hot June and above-average heat for the balance of the summer. With production modest to date, supplies could still prove light if cooling demand holds at elevated levels through the season.

“We feel the risk for heat, along with where we see supply/demand balances, even with Freeport out of service, suggest that there should be little reason for prices to fall much from here,” Bespoke said Friday. “Risk of new highs has, of course, lowered with Freeport, though if we stay hot enough for the balance of summer, and chew away much of what Freeport gave, that may change once again. For now, it seems prudent to expect more choppiness, with a lean toward the upside.”

Prices proved volatile overseas during the past week, too, though they spiked at points in both Europe and Asia – key destinations for U.S. LNG – amid mounting concerns about inadequate supplies from American exporters due to the Freeport mishap.

Europe, grappling with fleeting supplies from Russia, is growing increasingly dependent on LNG from the United States and elsewhere just as summer heat settles in on the continent. Inventory levels declined over the past week, a potentially ominous sign given this is the time of year when utilities push to inject gas into storage, according to Gas Infrastructure Europe.

Asia, too, is on the hunt for more LNG, but buyers there are facing high prices amid competition with Europe and now South America.

Altogether, summer demand could leave gas in storage globally at precarious levels ahead of next winter, stoking fears of a global supply squeeze.

Are U.S. Supplies At Safe Levels?

EIA on Thursday reported a 92 Bcf injection into U.S. gas stocks for the week ended June 10. The build lifted inventories to 2,095 Bcf. Still, domestic stocks were 13% below the five-year average.

Recent power generation demand has been strong, according to analysts at Tudor, Pickering, Holt & Co., hitting record seasonal highs and surpassing five-year average burns by about 9.5 Bcf/d in recent days.

Including this “robust power generation” as part of the balance equation, the firm’s preliminary modeling as of Friday was pointing toward a build of 70 Bcf for next the EIA report.

That compares bullishly with the five-year average injection of 82 Bcf.

Following the Freeport outage news, Goldman Sachs Commodities Research revised its end-October storage estimate to slightly above 3,500 Bcf, up from 3,424 Bcf predicted back in April.

“This remains a low storage level relative to history,” the Goldman analysts said. “As a result…should our U.S. gas balances realize tighter than we expect in the coming months, the risk remains that U.S. natural gas prices may need to trigger max substitution towards Appalachia coal, which we estimate would require a sustained gas price rally to around $12/MMBtu.”

The next nine months are likely to be “the tightest part of the U.S. gas forward balances of the next few years” amid lagging inventories and slow production growth year-to-date, the Goldman analysts said. “Once production growth becomes more visible, which we expect during 2H2022, this will set the stage for much softer U.S. balances in 2023 and 2024.”

Demand held strong ahead of a weekend that was forecast to prove dangerously hot as far north as the Dakotas.

The National Weather Service (NWS) reported widespread highs in the high 80s to 90s throughout the central United States and 100s in the Southwest on Friday. Major markets in the East also baked amid temperatures that spanned the mid-80s to the low-90s.

Contrasting Friday’s drops, national cooling demand was projected to prove even more robust in coming days as high pressure strengthens over the East and South, according to NWS projections.

AccuWeather said highs in the 90s will cook much of the country during the coming trading week.

Its meteorologists see “widespread highs in the mid- to upper-90s with additional areas likely to record temperatures in the low 100s,” the firm said. “These forecasts represent temperatures about 15-25 degrees above average” in many parts of the central and eastern regions of the Lower 48.

“Making matters worse will be high humidity and sunshine about as intense as it can be with the summer solstice on Tuesday,” AccuWeather added. “The several days on either side of the official start of summer are a time when the rays of the midday sun are as high in the sky as they ever get at any point of the year.”