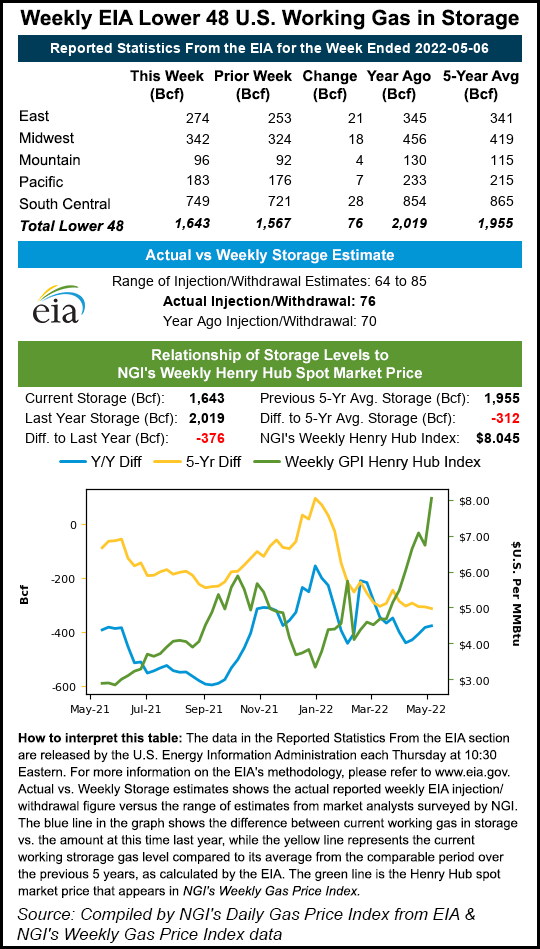 Bespoke Weather Services said Thursday that total gas-weighted degree days for the coming two weeks were forecast to be above normal.

“Southern heat is still the focus heading into this weekend and early next week, with the risk of 100-degree highs,” the firm said. “Power burns have been quite strong recently, despite high wind generation, and increased nuclear output. And this strong trend in burns is something that may be with us for a while, given the heat we have on the way, and expect to see as we move forward into the month of June.

“This supports our view that risks to prices are skewed more toward the upside.”

U.S. liquefied natural gas (LNG) demand from Europe remains strong, too, as the continent looks for U.S. exports of the super-chilled fuel to offset Russian supplies. European countries are working to minimize their dependence on Kremlin-backed gas in protest of Russia’s war in Ukraine.

EIA on Thursday reported an injection of 76 Bcf natural gas into storage for the week ended May 6.

Prior to the report, major polls showed analysts had expected an injection around 80 Bcf. The print compared to the five-year average increase of 82 Bcf.

The result reflected in part early-season cooling demand in the South during the covered period and light production levels amid spring maintenance work, a recurring theme in recent weeks.

Markets are fixated on “whether a jump in Lower 48-state production finally occurs, a necessity if the current tight supply/demand balance is to loosen enough to improve supplies on normal weather,” said The Desk’s John Sodergreen, writing on the company’s online energy platform Enelyst.

Production estimates were as low as 92-93 Bcf during the covered week. Gelber & Associates analyst Dan Myers said the market wants to see consistent 95-96 Bcf/d output amid summer heat to ensure adequate supplies. This would enable utilities to boost injections and narrow deficits to the five-year average.

“The inherent volatility of maintenance season has added a lot of noise,” Myers said on Enelyst Thursday.

U.S. inflation eased in April to an 8.3% annual rate from 8.5% the previous month, but prices still hovered near a 40-year high. Steep inflation, ignited by pandemic-induced supply chain challenges and pent-up consumer demand, has driven up costs for exploration and production companies, complicating efforts to ramp up output of both natural gas and oil.

“In very short order, supply has become the topic of the moment, elbowing out every other major and minor issue that has kept us all up at night in ’22,” Sodergreen said.

Production estimates have fluctuated again this week and held just below 95 Bcf on Thursday, according to Bloomberg’s latest snapshot. At the same time, weather-driven demand is relatively strong for early May.

“Prices have been spurred on by pretty consistently bullish weather,” Myers said.

The increase for the past week lifted stocks to 1,643 Bcf, but it left inventories well below the year-earlier level of 2,019 Bcf and the five-year average of 1,955 Bcf.

With cooling demand robust during the current week, the next EIA report could also fail to address deficits, Bespoke said.

“Indications are that this week is looking similarly tight, which, if we confirm that in next week’s report, is a pretty big deal,” the firm said.

Looking ahead to next week’s print, early analyst views show expectations for an injection in the mid-80s, according to Reuters’ preliminary polling. That compares with a five-year average injection of 87 Bcf for the period.

A day after the national average spiked nearly 80 cents, spot prices gave back a portion of those gains on Thursday.

Still, forecasts point to weather-driven demand ahead, explaining the prior day’s surge.

National Weather Service (NWS) outlooks showed persistent heat in Texas and the Southwest, with highs in the 90s, through the trading week. Above-average temperatures permeate parts of the North, too, including stretches of the Dakotas and Great Lakes, driving cooling demand.

For example, high temperature in eastern South Dakota topped 90 on Thursday, NWS data showed, a rarity for May.

Michael Shuman, a senior meteorologist with IBM’s The Weather Company, said more heat is on the way this weekend through next week.

However, Shuman added, “perhaps more importantly, a summer-like subtropical ridge will crest over California, the Southwest, the south-central U.S. and Texas. This will support a few days of hot temperatures in California and a multiday stretch of near-record, triple-digit heat in the desert Southwest, and it will prolong the hot weather in Texas.”