Still struggling to get a grasp on how much demand is being lost amid the coronavirus pandemic, natural gas traders on Monday took their cue from unparalleled deterioration in the oil markets. After an initial sell-off early in the session, the May Nymex gas futures contract rallied, shattering resistance and settling the day at $1.924, up 17.1 cents from Friday’s close. June climbed 14.6 cents to $2.049. 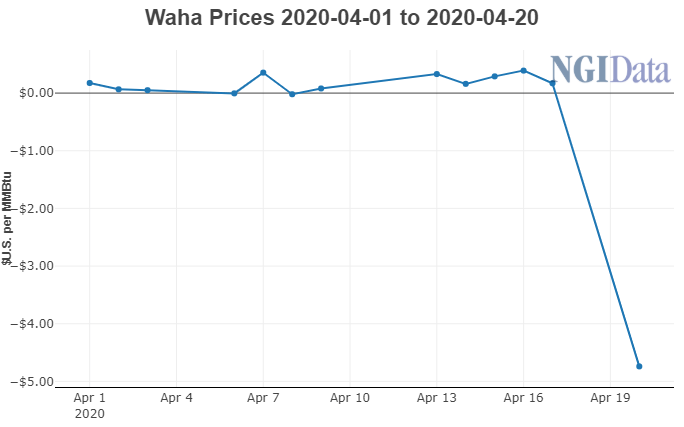 Small gains were seen across most cash markets in the Lower 48 on Monday. However, it was a far different, though familiar, story that unfolded in West Texas, where next-day gas plummeted to a record low and sent the NGI Spot Gas National Avg. down 16.5 cents to $1.315.

Though chilly weather is poised to continue through the rest of the month, it was turmoil in oil that captured the attention of natural gas traders to start the week. After opening Monday at $17.73/bbl, West Texas Intermediate (WTI) May futures spiraled into uncharted territory following a decision by CME Group Inc. to allow negative pricing for May futures only.

The WTI prompt month quickly slid below zero, and ultimately to a minus $37.63 settlement ahead of Tuesday’s expiration of the light sweet crude contract.

“The thought is that this will force producer shut-ins sooner rather than later, meaning less associated natural gas,” Bespoke Weather Services said. “We completely agree with the bullishness in the natural gas curve once to next winter, but before then, the picture is not as clear cut.”

Even before Monday’s unrivaled plunge for WTI futures, U.S. rigs have been falling off the map, with Enverus showing that total rigs have dropped from 794 rigs on March 18 to 498 rigs on April 18. Every basin in the country has seen rigs lay down, but the gas-heavy Appalachian Basin has held the strongest, falling only12.8% over the last month while other basins averaged about a 45% drop, according to Enverus.

“The basin has seen some declines in production based on pipeline nominations, but these declines have been consistent since the production peak in late 2019,” Enverus analysts said.

The historical oil price action likely means more pullback ahead, with the prolific Permian Basin not immune to the cuts. Cimarex Energy Inc. became the latest Permian Basin producer to publicly revisit its capital spending for 2020. The Denver-based firm plans to release all but one rig in early May.

However, Bespoke was quick to point out that natural gas is still impacted significantly by demand losses brought on by Covid-19 related shutdowns, and prices are at a level where there is some risk of liquefied natural gas slowdowns as well. “For these reasons, the front-led nature of the late day rally surprises us, and we have a difficult time justifying prompt-month prices where they currently sit.”

In fact, Bespoke said it may have moved its sentiment to “slightly bearish” if it weren’t for the low confidence it has in the market “actually trading on the data. This high volatility/low liquidity environment has dealt us many moves that have not seemed to ”make sense’ based on data, etc., so we cannot be sure that the market will not test $2.00 first. We’d view that as a place to take a shot selling, at least at the front of the curve, not in winter, where the real bullishness lies, in our view.”

Oil turmoil aside, the latest weather models also provided some continued support for natural gas prices. Although the midday American model backed off a bit, cooler/colder trends were seen in the Midwest East for the coming weekend into next week, along with “a few token cooling degree days” because of some strong heat for this time of year in the southwest quadrant of the United States, Bespoke said.

The coming span of cool weather won’t be as chilly as last week’s cold blast, which is likely to stall the string of bearish storage stats by the Energy Information Administration. EBW Analytics Group sees this week’s Energy Information Administration (EIA) report likely coming in well below the five-year average, “denying bears the ammunition they need to drive prices back down.”

Beyond the next EIA report, though, there lies the potential for as many as nine straight 100 Bcf-plus injections from late April through the end of May, according to the firm, which would drive down gas prices. An even bigger shock may come during May, when storage for Nymex crude, gasoline and other products is maxed out.

“When this occurs, several million b/d of oil production could be cut, abruptly reducing gas supply and sending futures back up,” EBW said.

As spot gas prices posted modest gains across much of the country thanks to a series of weak cool shots sweeping through, Permian cash markets were uncharacteristically influenced by the disintegration of West Texas oil prices.

“I think those two things have to be related, considering that Waha prices were still positive on Friday (although barely). Has the world really changed that much in three days?” asked NGI’s Patrick Rau, director of strategy & research.

With the WTI spot market price at minus $37.63, the same as the WTI May futures contract, producers are paying folks to take away the output of Permian wells, Rau said.

“It makes sense that if they are paying people to take the contents of the well, that would include the natural gas as well. Of course, the market has never seen this before, so I can’t point to any precedent on what happened before.”

While Waha prices have moved in and out of negative territory over the past year, it didn’t always lead to well shut-ins, because crude oil prices were typically still comfortably above break-even levels, according to Rau.

“No one was going to necessarily shut-in Permian oil wells unless the negative gas costs were more on a boe basis than the realized oil prices. But with crude prices now being below breakeven, and in some cases even negative, there is little incentive for producers to continue to flow unhedged wells, especially if there is nowhere to put that production.”

Elsewhere across the country, cash markets were a bit stronger to start the week as the coming weather systems were expected to send overnight lows into the 20s to 40s for modest demand, according to NatGasWeather. “With that said, these cold shots are colder trending compared to what the weather data showed late last week to add numerous Bcf in demand.”

“Most notably, maintenance at the Vixen Compressor Station is likely to cut roughly 485 MMcf of southbound Louisiana flows,” Genscape Inc. natural gas analyst Preston Fussee-Durham said. “Over the prior seven days, flows at this location have averaged 1.93 Bcf.”