Bolstered by favorable weather outlooks and supply concerns, natural gas futures forged higher on Tuesday, following a 10.5-cent gain the previous day. The August Nymex contract settled at $3.876/MMBtu, up 9.7 cents day/day and in the green for a third consecutive session. September rose 9.8 cents to $3.852. 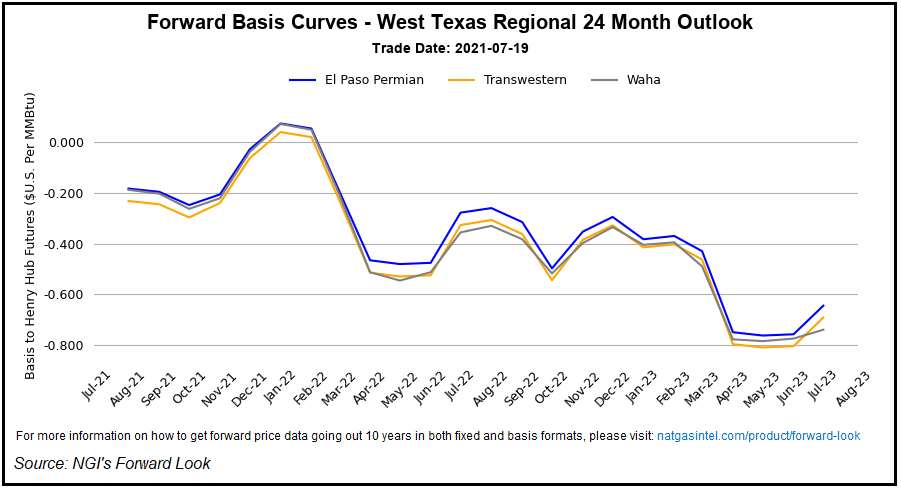 Forecasts on Tuesday shifted hotter for a second straight day, with a couple more gas-weighted degree days added to the end of the 15-day outlook in both the European and domestic models. Much of the West remains hot and dry through the end of the month, while heat is expected to intensify in the Midwest and South, including Texas.

Already solid, “national demand will increase late this weekend through next week as strong upper high pressure over the western and central U.S. expands eastward, with highs of upper 80s and 90s gaining ground,” NatGasWeather said. The current week is in line with seasonal norms, and the pattern turns “bullish for the six- to 15-day period as upper high pressure gains territory over the eastern half of the U.S.

“The overnight weather data teases cooler air attempting to push into the northeastern U.S. around Aug. 2-4, although a bit too far out to expect it,” the firm added. “As such, the back end of the 15-day forecast maintains a bullish lean until the weather data shows stronger bouts of cooling into the northern U.S.”

“While year-over-year net exports ran 4.0 Bcf/d higher in April and May, the increase in net exports accelerated to 6.3 Bcf/d in June and 8.4 Bcf/d month-to-date in July,” the EBW team said Tuesday. “Although the dramatic increase was telegraphed to the market in advance, the increase in LNG and pipeline exports to Mexico draws almost exclusively from the South Central region — placing upward pressure on Henry Hub. If hot weather simultaneously adds to power sector demand, very strong physical market prices could lead Nymex gas to reach $4.00/MMBtu as soon as later this summer.”

Production, meanwhile, has held near 91 Bcf early this week, off recent highs of 92-93 Bcf/d. Analysts increasingly are expressing concern that, if output remains relatively low, stockpiles of gas needed for the winter could prove light later this year.

Energy Aspects estimated end-October storage carryout approaching 3.5 Tcf, more than 10% below year-earlier levels. The current pricing environment is likely “influenced by the perception that production is light behind the pipe,” the firm added.

“Permitting data suggest that there will be an uptick in output,” particularly from the Haynesville Shale, “but Appalachia will continue to be hamstrung by a lack of new major infrastructure additions,” Energy Aspects said.

NGI’s model estimated a 30 Bcf injection. That would compare with a 38 Bcf build in the year-ago period and a five-year average injection of 36 Bcf, according to the EIA.

The agency last week reported an injection of 55 Bcf for the period ended July 9. The build increased inventories to 2,629 Bcf, though underground storage was below the year-earlier level of 3,172 Bcf and the five-year average of 2,818 Bcf.

Next-day cash prices gathered further momentum Tuesday and are up 27.5 cents on average so far this week amid solid weather-driven demand across several regions.

National Weather Service data showed a rainy weather system stalling over wide sections of the southern United States, but temperatures remained elevated and ranged from the mid-80s to the mid-90s on Tuesday. Strong heat continued to bake the Plains and most of the West, with highs ranging from the 90s to the 100s.

Demand is expected to mount further next week, with high pressure ushering in another round of hot highs – upper 80s to 100s – across the western half of the Lower 48. Parts of the East Coast and swaths of the South are expected to see highs in the 90s.

A “broadly-warm pattern is expected,” meteorologist Steve Silver of Maxar’s Weather Desk said Tuesday. “Aboves are widespread from the Interior West to central U.S. and Mid-Atlantic, with the hottest conditions relative to normal focused over the northcentral U.S., where much aboves prevail for much of the period. Drier weather allows aboves to return to Texas with highs in Dallas forecast near 100 degrees each day.”

EBW noted that wind generation in Texas has been volatile and unreliable this summer, adding to recent demand for gas. The Electric Reliability Council of Texas (ERCOT), which operates the state’s electric grid, reported that wind output dipped under 100 GWh/d three times since Memorial Day – well below average. EBW analysts said wind had rebounded in recent days, but they also noted that DTN’s latest seasonal forecast projects modestly below-normal wind in August before recovering to seasonal levels in September.

“If wind drops and ERCOT loads reach above average, it is possible that strong spot market demand and prices could reignite a late summer rally in natural gas futures,” the EBW team said.

As summer maintenance continues, meanwhile, Columbia Gas Transmission said it would perform planned pigging work on its MXP and SM-80 Loop Lines in West Virginia between starting Wednesday and continuing through July 28. Wood Mackenzie said this work could trim more than 560 MMcf/d of southbound/westbound flows on certain days.

Because of the pigging on the MXP Line, capacity through the MXPSEG MA42 throughput meter would be reduced to between 1,553 MMcf/d and 1,670 MMcf/d on gas days Wednesday and Thursday, Wood Mackenzie noted. Over the past 30 days, capacity at the meter averaged 1,975 MMcf/d and maxed at 2,116 MMcf/d, the firm said, translating to potential flow cuts of up to 563 MMcf/d.