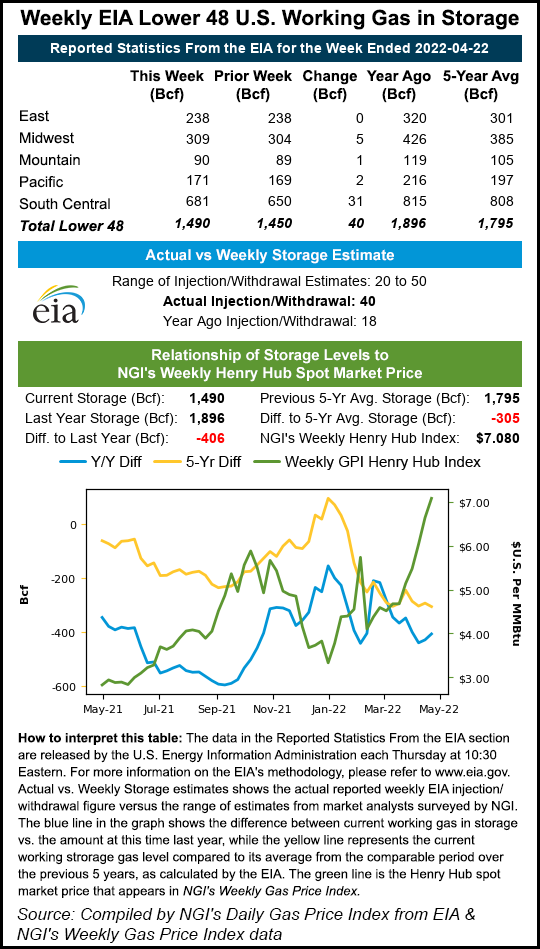 Bespoke Weather Services noted that with futures at levels not seen in more than a decade and extreme volatility ongoing because of the Russian conflict in Ukraine, even moves to 30-40 cents can be viewed as “pretty much just noise.” As for actual fundamentals, the firm said the data on Thursday was mixed.

Production showed some signs of recovery, but during the ongoing maintenance season, output may fluctuate over the next couple of months. Canadian imports were lower, with Mexican exports ticking up a bit. The return of higher wind generation, however, may be cutting into power burns, according to Bespoke.

“This week’s data gives us confidence that next week’s number moves solidly back in the tighter direction,” it said.

Weather demand overall is expected to remain above normal for the next 15 days, according to Bespoke. The gas market is still about one month away from when the shift to cooling degree days takes place, it said. However, some above-average warmth is seen for the southern United States in the 15-day outlook.

“All in all, however, the pattern does not look to stray too far from normal,” the forecaster said.

After posting steep losses early in Thursday’s session, the Energy Information Administration’s (EIA) latest storage report brought about a brief pop for the June Nymex contract. The EIA reported a 40 Bcf injection into natural gas storage inventories for the week ending April 22, on par with estimates ahead of the report.

One market observer on The Desk’s online energy chat Enelyst attributed the brief rise in the June contract after the EIA report to traders short covering after aggressive selling earlier in the session because of the “risk for a very bearish number.”

Said another Enelyst participant, “there is nothing bullish about today’s report.”

Bespoke called the EIA figure “loose.” However, it viewed the data, which was bearish to the five-year average injection, as likely a “one-off” given the data this week. It does not expect the balance reflected in Thursday’s report to be representative moving forward.

Ahead of the EIA report, the median of 11 estimates submitted to a Bloomberg survey as of Wednesday was a 38 Bcf injection for the period, with predictions ranging from injections of 20 Bcf to 50 Bcf.

The five-year average injection for the period is 53 Bcf, while EIA recorded an 18 Bcf build in the year-earlier period.

“It was colder than normal over most of the U.S. besides the very warm Southwest and far South and Southeast,” NatGasWeather said of temperatures during the latest EIA report week. The firm had pegged the build at 40-41 Bcf.

Broken down by region, the South Central continued to lead injections, adding a net 31 Bcf to stocks, according to EIA. This included an 18 Bcf build in nonsalt facilities and 14 Bcf in salts. Midwest inventories rose by 5 Bcf, while Pacific stocks edged up 2 Bcf. The Mountain region only added 1 Bcf, while the East stayed flat week/week.

Bulls Down, Not Out

With weather continuing to moderate and production likely to recover from recent freeze-offs, EBW Analytics Group said there could be more downside ahead for gas prices over the next month.

The upcoming weeks from mid-May through early June often feature the largest weekly storage injections of the year, according to EBW. This may provide an opportunity for the market to catch up to a lagging storage trajectory, with weekly storage builds potentially reaching the triple digits.

The July and August 2022 contracts currently sit near $7.00, EBW noted. In a scenario featuring a 250 Bcf bullish catalyst – akin to a hot summer – prices could easily surge $4.00-6.00 with few fundamental thresholds constraining gains. A similar 250 Bcf bearish catalyst, meanwhile, could barely cover the current storage deficit and prices would be unlikely to drift much below $4.00, representing around $3.00 of downside.

Despite little change overnight in the near-term weather outlook, spot gas prices came crashing down on Thursday. Prices likely moved in sympathy with futures, since chilly weather was expected to linger across the Midwest and eastern United States through the weekend.

Overnight lows in the upper 20s and low 30s were likely to lead to frost/freeze concerns over parts of the Ohio Valley and Mid-Atlantic through at least Saturday, according to the National Weather Service.

Despite the continued pull on gas for heating, the Northeast gave back much of Wednesday’s plump price increases. Algonquin Citygate next-day gas plunged $3.760 day/day to average $6.440, while farther upstream, Transco-Leidy Line dropped 52.0 cents to $6.085.

Cash prices fell as much as 44.0 cents across the Southeast and into Louisiana, where benchmark Henry Hub slid 14.5 cents to $6.790. Similar losses extended into the country’s midsection, where Chicago Citygate slid 38.5 cents to $6.625.

Looking ahead to next week, Westcoast Transmission said it would shut in flows through the Sunset Creek interconnect from Monday to Friday. This could limit up to 220 MMcf/d in deliveries onto Nova Gas Transmission Ltd. (NGTL) at the location, according to Wood Mackenzie.

“However, with flows slowly, but constantly, declining since April 24, actual cuts to flows may be closer to roughly 120 MMcf/d,” Wood Mackenzie analyst Quinn Schulz said. “Assuming that demand for Westcoast receipts on NGTL also remains relatively constant, there is roughly 111 MMcf/d of available capacity at the nearby Gordondale interconnect, which could help offset some of these flow impacts.”