Natural gas futures held onto the extensive gains they accumulated at the start of the holiday week, slipping only a few pennies on additional warming in the forecast. The January Nymex contract settled Tuesday at $4.055/MMBtu, off only a half-cent from Monday’s close. The February contract slipped 5.7 cents to $3.885. 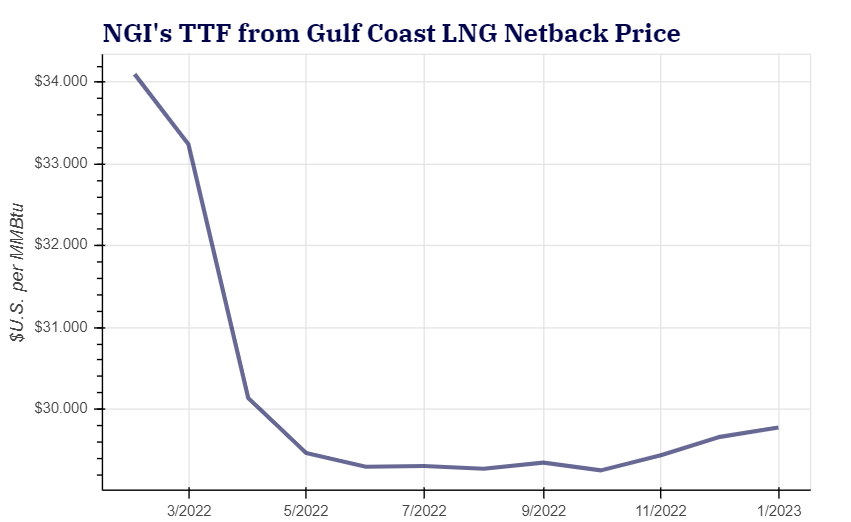 The week between Christmas and New Year’s Day is a notoriously volatile period for Nymex futures, with big swings and thin volumes seen as the year draws to a close. On Tuesday, only about 31,000 prompt-month contracts were traded, compared to more than 107,000 February contracts.

Mobius Risk Group pointed out that futures traders – the few there are this week – are dealing with the push and pull of several fundamental factors. Increasingly volatile liquefied natural gas (LNG) destination markets and a “seemingly perpetually lingering” threat of cold also are being considered. Nevertheless, “January has remained anchored near $4.00,” the firm said.

On the weather front, models have trended warmer in recent runs, failing to bring forward any widespread cold despite some support in global pattern drivers. NatGasWeather said cold air over the Northern Plains is expected to slide south into North Texas and eastward across the rest of the northern United States late in the week. Overnight temperatures are forecast to fall as low as the single digits, but the blast of chilly air has lost some intensity in recent days.

Furthermore, there is a warmer-trending break during the middle and end of next week, according to the forecaster, where much of the southern and eastern halves of the country are seeing warming above normal once again. Even a subsequent cold shot on the radar for Jan. 7-9 has lost some of its chill factor in recent model runs.

“What still needs resolving is just how much cold air advances out of the Northern Plains south and eastward Jan. 9-12 since there’s potential these days still play out rather frosty,” NatGasWeather said. “We continue to see some risk Texas and the Southern Plains eventually will see a shot of frigid air at some point in mid-January, thereby requiring close monitoring.”

Production has been particularly high in the Marcellus and Utica shales, Aegis said. Output has increased to a record high of more than 34.8 Bcf/d in December.

At the same time, LNG feed gas demand was around 12.5 Bcf/d on Tuesday, also near all-time highs despite a major pullback in global gas prices. In Europe, gas prices in recent days have plunged from recent record highs that pulled LNG cargoes away from Asia. The decline, partly because of warmer weather and lackluster holiday demand – put European prices back at a discount to Asian prices.

That said, LNG demand is expected to remain strong throughout the winter as European stocks remain at concerningly low levels for this time of year. More cold also is on the way as the calendar flips to 2022.

The unquenchable thirst for LNG bodes well for Sabine Pass’ sixth production unit and the Calcasieu Pass terminal, which are continuing to ramp up toward commercial operation. Once the facilities achieve substantial completion, U.S. LNG export capacity of around 13 Bcf/d is expected to be fully utilized.

Mobius analysts pointed out that juxtaposed against the backdrop of weather threats and highly volatile global gas pricing is a set of daily/weekly storage data posted by pipelines, which illustrates how quickly supply and demand can swing from bearish to bullish.

The storage week ending Dec. 23 is poised to deliver a withdrawal easily above the 125 Bcf mark and potentially greater than 150 Bcf. At the same time, data for the current week points to a remarkably meager withdrawal of less than 50 Bcf, with the possibility of a draw as little as 25 Bcf. Although there are two more full days of data to come – Wednesday and Thursday – thus far, the holiday demand impact appears acute this short holiday week, according to Mobius.

“Weather risks remain, and currently generally mild weather in all three major consuming regions (North America, Asia, and Europe) is in favor of those with short interest in their respective markets,” Mobius analysts said.

However, trading in January, both in the daily physical market as well as the final two trade months of the winter withdrawal season, is set to test the mettle of even the most seasoned market participants, according to the Mobius team. A three-week period where the nearby contract oscillated between $3.70 and $4.00 should not be taken as a predictor of what is to come when the calendar turns to 2022.

“As the broader investing community continues to bang the drum of more renewables and less fossil fuels, the stage is also being set for price/demand volatility to continue for some time,” Mobius said.

Spot gas prices climbed across most of the country Tuesday, led by double-digit increases in the Rockies amid a stretch of brutal cold in the region.

The National Weather Service said the coldest temperatures were expected in the Northwest, northern Rockies and northern High Plains. Daily low temperatures were forecast to fall below minus 20 degrees in parts of Montana and North Dakota, which, combined with gusty winds, would cause wind chills to plummet as low as 50 degrees below zero. Even daytime highs were seen struggling to get above zero, with the freezing conditions seen continuing through Wednesday.

Meanwhile, Gas Transmission Northwest (GTN) declared a force majeure that would limit flows past Kingsgate to firm primary services. GTN said the force majeure was because of a mechanical failure at compressor station 8 on the border between Washington and Oregon. As of Tuesday afternoon, GTN said available capacity of 2,392 MMcf/d would be extended to Friday (Dec. 31).

Given the rise in heating demand from the wintry weather in the region, cash prices have soared. PG&E Citygate spot gas prices shot up 29.5 cents to average $7.465 for Wednesday’s gas day. The pricing location has added nearly $1.00 in the past two days.

The East Coast posted the only losses across the country, with losses ranging from about a dime to as much as 55 cents for Wednesday’s gas day.