Traders kept a watchful eye on weather models Wednesday, but with little significant change to long-term outlooks, opted to hold their positions intact ahead of fresh storage data expected Thursday that is likely to reflect the first build of the season. The Nymex May gas futures contract settled only seven-tenths of a cent lower at $2.677, as did June, which landed at $2.715. 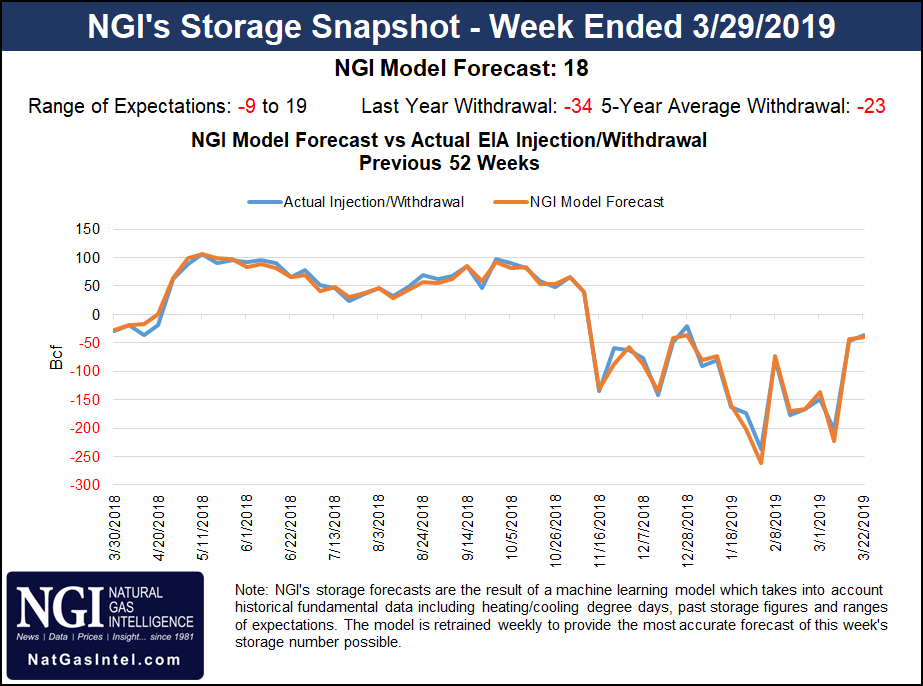 Cash price action was a bit more definitive as warmer weather moved through the Plains and across the northern United States on Wednesday, sending temperatures to a balmy 70 degrees from Chicago to New York City and pushing prices mostly lower. With slightly cooler weather in the West leading to the country’s only meaningful price gains, the NGI Spot Gas National Avg. fell 15 cents to $2.055.

With the start of the storage injection season likely to be reflected in Thursday’s Energy Information Administration (EIA) report, any reverse in the spring weather pattern could temporarily stall meaningful stock builds that are needed to replenish lagging inventories. Overnight and midday weather models showed few changes overall, continuing to advertise a blocking regime setting up in the middle of April after a warm period this weekend and into the first part of next week, according to Bespoke Weather Services.

“While we do not think the blocking setup will lead to the same level of cold we saw a year ago, it does still keep risks skewed in the colder direction versus the current forecast, with the main question being how much Pacific flow comes into the West,” Bespoke chief meteorologist Brian Lovern said.

American ensemble weather data shows more of this than European ensembles, and as a result is warmer overall in the medium range, according to Bespoke. Activity related to the Madden-Julian Oscillation remains quite weak, which doesn’t provide any additional clues to solving the pattern, “keeping the battle lines drawn between the blocking setting up and any El Nino-Southern Oscillation-related flow coming in off the Pacific side.”

NatGasWeather forecasters said the potential mid-April chill would be more impressive if not for the southern United States remaining mostly comfortable with highs mostly in the 70s and 80s. “This should still result in builds closer to normal, but only after the next three EIA reports show draws larger than normal, starting with Thursday’s.”

Last week, the EIA reported a 36 Bcf draw that was viewed by the market as likely the last storage withdrawal of the season. Inventories as of March 22 stood at 1,107 Bcf, 285 Bcf below last year and 551 Bcf below the five-year average, according to EIA.

While current weather outlooks for mid-April would likely lead to storage builds coming in closer to normal, if the data were to trend a little further cooler with it, “the pattern will begin to lean bullish,” NatGasWeather said.

Spot gas prices continued to slide Wednesday as high pressure strengthened east of the Plains, sending temperatures into the 50s and 60s across the northern United States and increasing coverage of 70s expected by this weekend through early next week, according to NatGasWeather. The southern half of the country was forecast to be warm with highs in the 70s and 80s, while slightly cooler exceptions were expected over the West and portions of New England, where weather systems were forecast to track through.

The mild set-up led to small price declines across most of the country, but West Texas market hubs continued to buckle under pressure from rampant associated gas production and a lack of takeaway capacity. Toss in some regional pipeline maintenance and the result was another fresh low for Waha spot gas, which tumbled as low as minus $9 but went on to average minus $5.75, a drop of $2 on the day.

“Collectively, this has left approximately 0.5 Bcf/d of natural gas without a home in West Texas, and Waha prices have certainly reacted,” Mobius analysts said.

Before about two weeks ago, no U.S. gas hub had ever averaged a negative cash price. Then, from trade date March 21 on, excluding Tuesday’s and Wednesday’s price action, Waha cash averaged minus 47 cents, NGI data show.

“To fall from this already unheard-of negative average by more than an additional $3 (on Tuesday) highlights the uniqueness of the current price environment in the highly constrained Permian,” Genscape natural gas analyst Joe Bernardi said.

Permian hubs in addition to Waha, such as El Paso Permian and Transwestern, have moved similarly into completely uncharted territory.

Genscape’s Permian production estimate has been down somewhat over the last several days compared to March’s monthly average, but as is typical for the beginning of the month, the firm has seen upward revisions to these numbers.

Meanwhile, spot crude oil prices in the Midland sub-basin were trading at around $61.50/bbl. If pure short-term variable costs of producing oil, such as lifting costs, gathering and transportation fees and taxes add up to roughly $10/bbl, that yields a gross margin of $51.50/bbl, according to NGI’s Patrick Rau, director of strategy and research.

“Any producer who had to pay $9 for gas in the Permian just added a crude oil equivalent of $54/bbl to those costs,” he said. “There goes their gross margin, and unless it would cost producers even more if they shut-in those wells, there goes their short-term economic incentive to keep pumping oil.”

In the Midcontinent, price declines were less impressive as regional prices fell a few pennies at best. Southern Star, however, tacked on another nickel or so to average $2.405 in response to ongoing maintenance on the pipeline.

Henry Hub was down 6.5 cents to $2.67, while most other pricing hubs in the Southeast slipped less than 5 cents.

Appalachian prices moved back into the black as Texas Eastern Transmission (Tetco) lifted the force majeure in effect since late January because of an explosion on its 30-inch diameter system south of the Berne, OH, compressor station. Lines 10 and 15 south of Berne were returned to service with an operational capacity of 2.16 Bcf/d, still about 100 MMcf/d short of Berne’s pre-explosion capacity, according to Genscape.

“There has been no official word on restoring the remaining capacity,” Genscape analyst Josh Garcia said.

Line 10 between Holbrook to Uniontown is targeted for a return to full service by the middle of May as it is still roughly 40 MMcf/d below its pre-explosion capacity, but Tetco has stated that any restrictions associated with this outage have been lifted.

New England prices pushed out small gains of less than a nickel.

The sideways action at Sumas is a far cry from the volatility seen at the hub during the winter, after an October explosion on Enbridge Inc.’s Westcoast Transmission resulted in an interruption of imports from British Columbia (BC). The National Energy Board said BC gas production fell by 12% during 4Q2018 as a result of the explosion. The pipeline safety restriction continues to hold down gas deliveries to southern BC and the U.S. border crossing to about 1.4 Bcf/d, or 200 MMcf/d below normal, according to the board.

“Current production estimates anticipate that production will continue to recover, and could return to nonrupture levels by the fall of 2019,” the NEB said. “However, this is dependent on the company demonstrating it is safe for the BC pipeline to return to its licensed maximum operating pressure.”