After a two-day rally that added roughly 40 cents to the price of September natural gas, Nymex futures stalled Wednesday as recent cooler shifts in the weather data were too much to ignore. The September Nymex contract settled two-tenths of a cent lower at $2.191. October was nearly unchanged at $2.331. 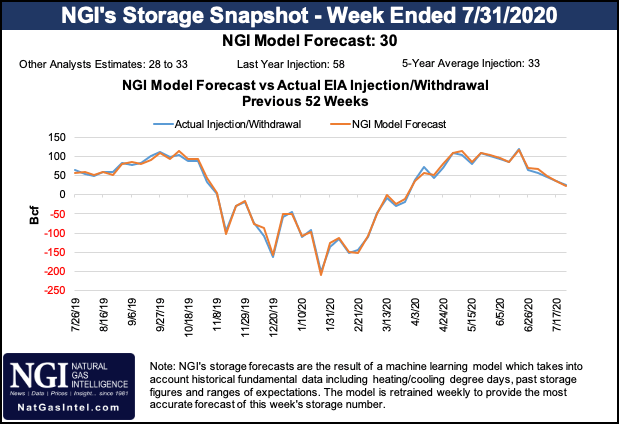 “But it is natural gas, and when one side has their back against the wall, price moves become extreme and irrational,” said NatGasWeather.

The latest weather data showed the Global Forecast System (GFS) down 8 cooling degree days (CDD) on further cooler trends for mid-August, according to the firm. However, the European model was little changed and now is hotter than the rest of the data by more than 20 CDD.

“It’s still a very warm to hot pattern for much of the U.S. late this weekend through mid-August, it’s just the European has the strength of the hot upper ridge much stronger than the rest of the data, and to our view is likely too hot,” NatGasWeather said.

With prices essentially flat on Wednesday, Bespoke Weather Services said the market may be finally coming around to the idea that containment risks are much lower than what was being priced into the market as late as last week. Although it expected a strong price move to come, it “definitely did not expect it to show up already here in early August. As always, timing these moves is very tricky.”

Stockpiles already are trending well ahead of historical levels, and Thursday’s Energy Information Administration (EIA) is expected to shed more light on the trajectory of U.S. inventories. The EIA reported last week that stocks grew by 26 Bcf to 3,241 Bcf, which compared to year-ago inventories of 2,615 Bcf and the five-year average of 2,812 Bcf.

Analysts estimated Thursday’s EIA report would show stocks growing by another 28-33 Bcf. A Bloomberg survey of analysts produced a median build of 30 Bcf, as did a Reuters survey. A Wall Street Journal poll averaged 31 Bcf. NGI projected a 30 Bcf build, which compares with last year’s 58 Bcf build and the 33 Bcf five-year average.

As for the rest of the injection season, Tudor, Pickering, Holt & Co. (TPH) analysts are currently modeling a peak of 4.05 Tcf, which they said creates some breathing room. However, regional balances in the East and Midwest still could prove problematic.

“That said, if the market is willing to write off storage risk for the balance of summer, we could still see an additional 40 cents or so of upside at the front of the strip to take some of the record contango out of the curve,” the TPH team said. “We’re not quite ready to completely write off storage risk just yet, particularly as pricing strength begins to draw more coal back into power generation. However, with risk dropping by the week, we expect pricing likely continues to grind higher but with ample volatility as storage concerns ebb and flow.”

EBW Analytics Group agreed that volatility would likely continue for the next couple of months.

From a fundamental perspective, the current price level is sustainable, but a retreat to test support remains likely near term, the firm said. From a seasonal perspective, even after accounting for sharply higher prices, lower production, hotter weather, rising LNG exports and baking in a warm fall, EBW said the storage trajectory still appears on track to remain shy of a record high.

“Still, as longs take profits and shorts gradually re-establish positions over the next one to two weeks, prices may fall to retest support before continuing to build higher,” the firm said. “Any reversal in near-term conditions, including an uptick in production or slowing LNG feed gas demand, may hasten a decline.”

In a larger context, though, the repricing of the Nymex forward curve is likely here to stay, according to EBW. Although analysts too did not expect upside potential to be realized this abruptly, “we highlighted the potential for growing volatility and structural underpinnings for upside price movement through the fall, including the mismatch between the storage trajectory and the gaping Nymex October 2020-January 2021 calendar spread.

The October/January spread bottomed at minus $1.09 on June 27 and has since contracted by 32 cents. At minus 77 cents after Wednesday’s close, the discount for October relative to January should be adequate to pay capacity holders enough to find room in storage, according to Mobius Risk Group.

The firm’s analysts pointed out that the October/April spread had shown a similar dynamic, “and if anything, the move has been more severe. October was trading as much as 60 cents under next April for much of the past several weeks, and at present, that spread stands at 32 cents.”

Spread contraction could be the product of speculative traders seeing Monday’s noted fundamental dynamics, coupled with steadily improving spreads to Europe, as reason to buy the front of the curve, Mobius said.

The analyst team said although the spread from U.S. benchmark Henry Hub to the Dutch Title Transfer Facility is still inside of 50 cents, in October the spread widens to 70 cents and by November expands to $1.20.

“When LNG exports finally move back to 8.5 Bcf/d or more (10 Bcf/d of capacity), tightness in the U.S. market will become glaringly obvious,” Mobius said.

Eastern locations were pummelled by lower power demand in the wake of former Hurricane Isaias, which downed power lines along the Eastern Seaboard after making landfall in North Carolina on Monday. Though utilities continued to work to restore power, demand took a hit across the region and brought prices crashing down.

However, big losses also were seen in West Texas, where a force majeure at Station 6 on the Transwestern Pipeline choked back Permian Basin supplies. Transwestern cash was down 38.5 cents to $1.00, while Waha was down 41.5 cents to $1.130.The lower output coming from the basin provided some modest uplift to California markets, where SoCal Citygate next-day gas climbed 3.5 cents to $2.200.