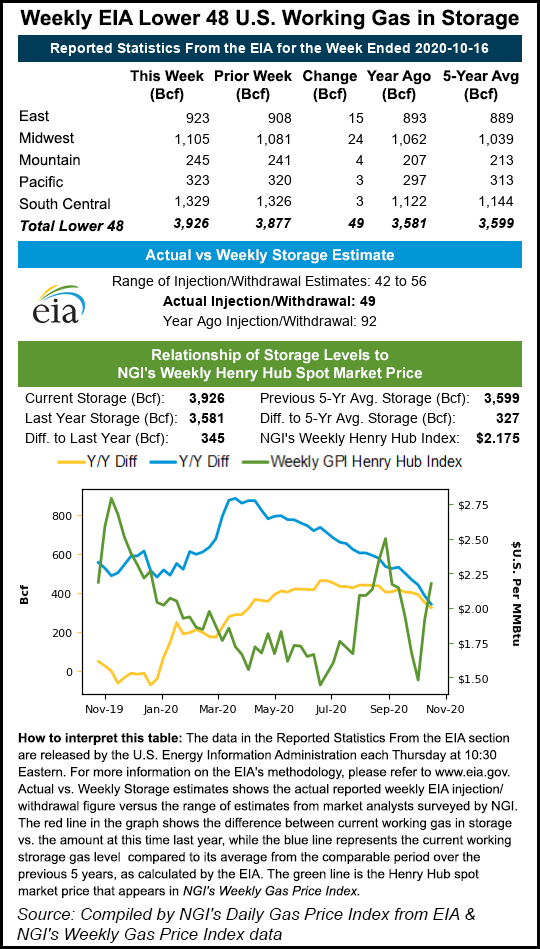 Still, Nymex futures prices barely flinched after the EIA data came in slightly lower than consensus. Ahead of the report, NGI’s model projected 52 Bcf build, while other analyst estimates ranged from 42 Bcf to 56 Bcf. The EIA recorded a 92 Bcf injection for the same week last year, while the five-year average stands at 75 Bcf.

Analysts on The Desk’s online chat Enelyst noted that Nymex trading volumes dried up quickly after the report, which they viewed as “unusual.”

Bespoke Weather Services said because the EIA’s reported 49 Bcf figure was well within the range of estimates, it viewed it as “neutral,” though the supply/demand balance remains “very tight” heading into the start of winter.

“We do expect some loosening going forward as higher prices impact power burns, but the backdrop remains quite bullish if weather can deliver a colder pattern this winter,” Bespoke said. “We do not currently favor a cold winter at this time, however.”

Enelyst participants pondered whether $3 gas would shed some of the tightness currently in the market. Gelber & Associates Inc. analyst Dan Myers said he expects gas-to-coal switching to make a comeback over the next few weeks. “The market could lose around 1.5-2 Bcf/d of power demand compared to last year at these prices.”

Broken down by region, the Midwest added 24 Bcf into inventories, and the East added 15 Bcf, according to EIA. Stocks in the Mountain region climbed 4 Bcf, while the Pacific rose 3 Bcf. The South Central region reported a net 3 Bcf injection, including a 9 Bcf build in nonsalt facilities and a 6 Bcf withdrawal in salts.

Analysts were unsure of how the next few weeks would play out on the storage front. Some expected withdrawals to begin as early as two weeks from now, while others expected draws to begin the first week of November.