Big fluctuations continued along the Nymex natural gas futures curve early Monday as traders wrestled with hotter shifts in the latest weather models and a step up in production. The September contract, which rolls off the board later this week, settled at $3.945, up 9.4 cents on the day. October also picked up 9.4 cents to hit $3.960. 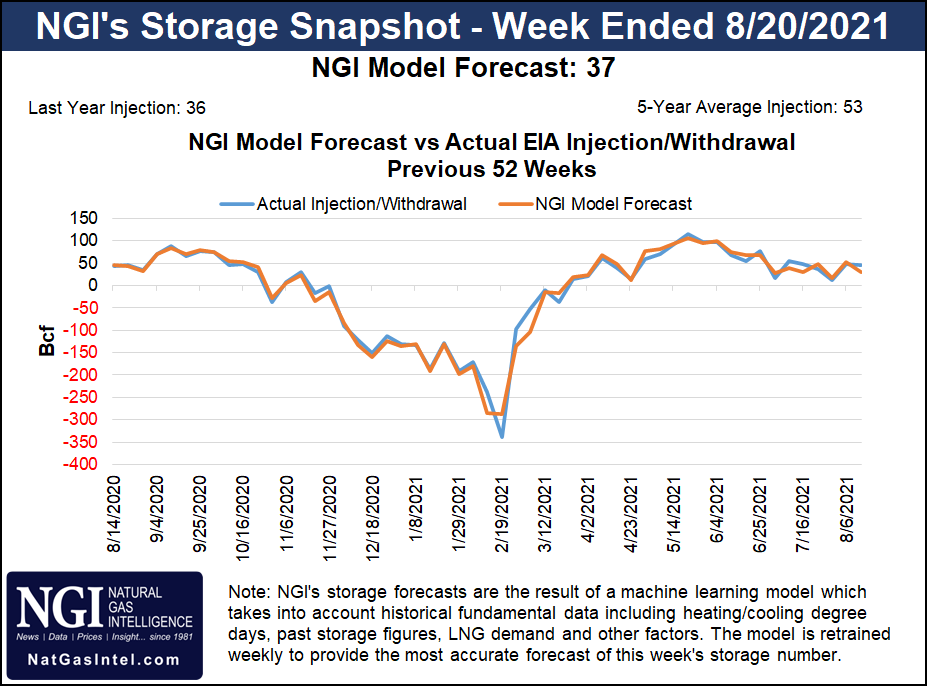 After last week’s wild price swings, futures looked eager to continue riding the rollercoaster during Monday’s session. The September Nymex contract traded more than a nickel higher than Friday’s levels early in the day. Then they moved into the red as traders digested stronger production. By midday, the prompt month was back at earlier peaks, eventually settling on the higher end of the 11.0-cent range.

Lower 48 dry gas production was above 92 Bcf on Monday. On the surface, this may have started to alleviate some supply concerns for traders who figured the stronger output would coincide with milder weather and thus could be used to refill storage. Bespoke Weather Services noted, however, that production remained off highs achieved earlier this year. Even though the higher output doesn’t do much to quell storage concerns heading into the winter, “we are a little surprised the market shrugged off the production gain so easily.”

Even though the summer season is winding down, the latest forecasts show at least one more round of truly hot weather across much of the United States. Bespoke said there was another notable bump in projected gas-weighted degree days (GWDD) for the 15-day period. With the revision, the week ending Aug. 27 is now projected as a “record hot week, GWDD wise, for the time of the year.”

The firm said heat is expected to drop off closer to normal levels moving into early September, though the La Niña state suggests the bias of the pattern remains toward the hotter side. Meanwhile, storm activity would have to be monitored closely. “…Some models indicate possible Gulf mischief down the road, but no clear threats exist currently,” Bespoke said.

Over the weekend, Hurricane Grace made a second landfall in Veracruz, Mexico, as a major Category 3 storm. The storm made an initial landfall on the eastern coast of the Yucatan Peninsula last Thursday before weakening to a tropical storm. It regained strength as it moved west.

Tropical Storm Henri, which was downgraded to a depression by Monday afternoon, made landfall early Sunday along the coast of Rhode Island. In addition to dumping more than a half-foot of rain across large swaths of the Northeast, 115,000-plus customers were without power in Rhode Island, Connecticut and Massachusetts at the peak of the storm. Local utilities were still at work restoring power on Monday afternoon. More than 72,000 of National Grid plc’s customers across New England had their power back on by late Sunday.

Looking ahead to what the rest of the week may bring, it appears that the upcoming Energy Information Administration (EIA) storage report could show some significant retightening versus last week’s report. NGI is modeling a 37 Bcf injection for the upcoming EIA report, which covers the week ended Aug. 20. Bespoke called for a 29 Bcf build.

Last year, EIA recorded a 36 Bcf build for the similar week, while the five-year average is a 53 Bcf injection.

“The retightening in the data may just be enough to make a run back toward $4.00 into September expiration” later this week, Bespoke said.

EBW Analytics Group said “very hot weather” this week could further add support to the September contract ahead of its expiration on Friday. With temperatures expected to moderate significantly starting next weekend, however, cash prices and futures are likely to soften heading into the Labor Day holiday. The October contract could retest support at or below $3.80, it said.

“By the second or third week of September, with the storage deficit remaining at high levels, the market could start focusing more on the coming winter, when the risk of major price spikes will be much higher than normal,” according to EBW. “As this shift in focus occurs, futures could start to rebound, with the winter-month contracts potentially leading the October and November contracts to new highs before the month ends.”

Meanwhile, Wood Mackenzie offered a glimpse into the timeline for two liquefied natural gas production facilities to come online. The firm noted that on Aug. 16, the Calcasieu Pass, LA, facility sent an implementation plan to federal regulators for the hot oil systems. And last Friday (Aug. 13), Sabine Pass Train 6 was granted its request to “deliver, store, and circulate hot oil both at ambient and heated temperatures for commissioning” the sixth train’s hot oil utility system.

The school bells may have rung for much of the southern United States, but summer remains in full swing when it comes to temperatures. With widespread highs of 90s this week, as well as some 100s in Texas, spot gas prices were on the rise Monday across much of the United States.

In the Midcontinent, Northern Natural Demarc next-day gas averaged $3.860, up 16.0 cents from Friday. The sharp move higher was because of scheduled work along the Northern Natural Gas Co. pipeline beginning Tuesday and lasting through Friday.

On the East Coast, a return of heat and humidity were all that was left for the region in Henri’s wake. AccuWeather said daytime temperatures should reach the upper 80s to lower 90s this week, but with high humidity, it may feel like 100 in the afternoons.

“Temperatures will rebound for Tuesday and beyond with what will be a very warm and humid stretch of weather that will likely stick around through the end of the week,” AccuWeather meteorologist Matt Benz said.

Similar gains were seen on the West Coast.

Meanwhile, a fire occurred on an offshore oil platform operated by Mexico’s state-run Petroleos Mexicanos, aka Pemex, on Sunday. The blast killed at least five people, and two others were missing as of Monday afternoon, according to officials.

The incident is at Pemex’s E-Ku-A2 platform, part of a gas-processing center of the Ku-Maloob-Zaap complex in the Gulf of Mexico’s Bay of Campeche. The fire was extinguished later Sunday.

The incident was impacting 421,000 b/d of oil production with 125 wells shut in. The company early Monday said the affected platform’s gas valves had been shut to extinguish the fire, while an emergency plan was put in place to search for the missing people, all of them contract workers.