Natural gas futures shifted into neutral Tuesday amid some inconsistencies in the weather data and a dip in liquefied natural gas (LNG) demand. After four straight sessions in the green, the January Nymex gas futures contract settled flat on the day at $2.682. February also was nearly unchanged at $2.680. 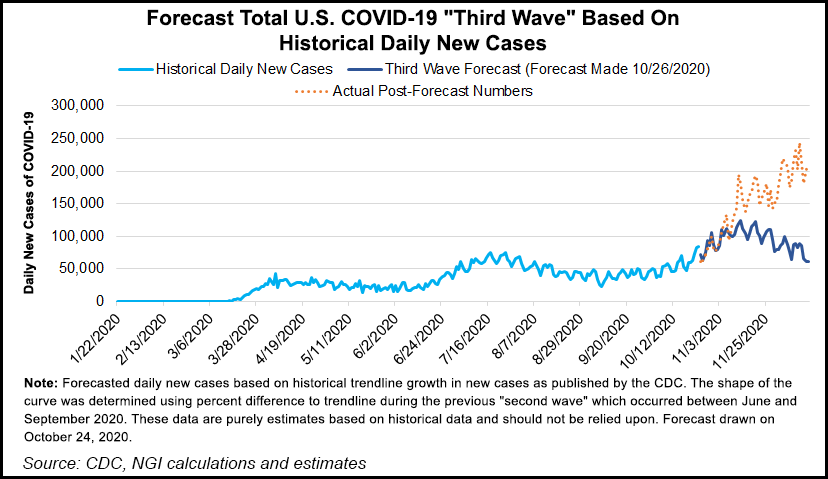 Spot gas prices were mixed across most of the United States, but big gains continued on the East Coast ahead of a second winter storm set to unleash frigid air on the region. NGI’s Spot Gas National Avg. climbed 21.0 cents to $3.245.

Though recent weather model runs have been far from bullish, the projected variability in the outlook for the balance of December had supported the gas market. The January Nymex contract tested $2.381 three times over the past week but hit an intraday high of $2.708 on Monday. The prompt month traded near that level again on Tuesday, but ultimately finished the day in the red as weather model data continued to flip flop.

NatGasWeather said the American and European models both shed demand from the 15-day outlook, but the European data continued to run significantly colder than the American Global Forecast System. Specifically, the model continued to show a cold enough pattern this week and in the Tuesday afternoon run, gained back more than half of the demand that was lost for the Dec. 25-27 period.

The European model still showed a milder break around Dec. 28-29, “but we view that as potentially a brief one as cold reloads over Canada before making a return push into the U.S. around Dec. 30-31,” NatGasWeather said, noting that more data is needed to be confident in that theory.

Meanwhile, Mobius Risk Group pointed out that from Monday through Thursday, the U.S. population-weighted heating degree days (HDD) count was predicted to be three more than the 30-year normal, while the comparable period last week (Dec. 7-10) was 14 HDDs warmer than normal. “With the most bullish days of the week still to come, and an Eastern seaboard snowstorm to boot, further upside could be forthcoming.”

Indeed, national demand is expected to be strong the next several days as numerous weather systems impact the Lower 48. One system is exiting the East Coast as a new one spins up over the Plains, South and Southeast into Tuesday night, NatGasWeather said. This southern U.S. system is forecast to track up the East Coast Wednesday and Thursday, bringing areas of rain and snow while tapping cold air over Canada.

However, like many other weather systems before them, this week’s storms were expected to dissipate quickly, setting the stage for a warmer-than-normal pattern over much of the country through the middle of next week. Energy Aspects analysts said the lack of sustained cold this winter should leave physical market participants assured that inventories can comfortably withstand the rest of winter. The firm is projecting an end-of-December Lower 48 carryout of 3.23 Tcf.

Energy Aspects said the sequential momentum in production also contributed to the loosening of short-term balances. The firm in its October outlook outlined expectations for a withdrawal of 915 Bcf in the final two months of 2020. It currently projects a drawdown of only 690 Bcf over November-December.

“The original estimate was based on 10-year normal weather and lower net supply figures, which resulted in a forecast of around 40 Bcf/HDD being withdrawn,” Energy Aspects said. “That figure now stands at 32 Bcf/HDD.”

Though fluctuations in demand have been expected because of the ongoing commissioning of the third production unit at Cheniere Energy Inc.’s Corpus Christi facility, Bloomberg reported that Tuesday’s decline was attributed to a utility plant trip overnight that resulted in the controlled shutdown of Cameron LNG. With the issue resolved, Cameron is in the process of restarting the trains.

Energy Aspects said industrial demand also has trended higher than it predicted in October, while structural demand growth via new pipeline capacity for exports to Mexico is adding 0.7 Bcf/d year/year to tighten this winter’s balances. Since Nov. 1, U.S. power demand has averaged nearly 13 GW lower year/year, a more than 2.4 Bcf/d reduction, primarily because of the lower HDDs year/year, as well as ongoing reductions tied to Covid-19.

“Yet gas use by generators is down by about half that amount, as lower prices year/year offset the total load reductions,” Energy Aspects said.

“Weather will undoubtedly be the driving force; however, weather-adjusted supply-demand, which appeared to massively loosen in mid- to late November, is once again remarkably tight,” Mobius said.

Spot gas prices were mixed on Tuesday, with much of the country starting to retreat from Monday’s spikes. However, the East Coast charged ahead as a major Nor’easter​​​​​​​ was set to unload the biggest snowstorm in years across a good portion of the Northeast, according to AccuWeather.

The forecaster said interior winds were expected to ramp up and create near-blizzard conditions for parts of the region through Thursday morning. However, one factor may keep the storm from becoming a full-on “snowmageddon” — its forward speed.

“It’ll be a fast-moving storm, which will keep overall snow totals down,” AccuWeather senior meteorologist Alex Sosnowski said. “Even still, at the storm’s peak, snow is expected to come down at a rate of one-to-three inches per hour.”

The National Weather Service issued winter storm watches and warnings Tuesday across eight states spanning from North Carolina to Massachusetts ahead of the storm. More snow was expected from the developing Nor’easter than from all the storms last winter combined in Washington, DC, Philadelphia, New York City and Boston.

Precipitation was forecast to start out as snow in Baltimore and the DC area, but a change over to a wintry mix then to all rain could limit total accumulations, according to AccuWeather. Mixing also is expected to cut down on snow totals in Philadelphia, but the City of Brotherly Love could be buried under four-to-eight inches of snow when the storm is done.

“That’s more than the city saw during all of last winter when only 0.3 of an inch of snow fell during the entire season,” the forecaster said.

Given the nippy forecast, gas prices across the region continued to post significant gains. Algonquin Citygate spot gas jumped $1.705 to average $7.530, while Transco Zone 6 NY shot up $1.400 to average $4.215.

Interestingly, the majority of Appalachia hubs landed in the red, with losses of up to 10.0 cents at most pricing locations. The exception was Texas Eastern M-3, Delivery, which picked up $1.270 to average $3.975 amid ongoing restrictions on the pipeline.

Likewise, Transco Zone 5 was the lone gainer in the Southeast. Next-day gas picked up $1.245 to hit $4.095, but other hubs in the region slipped a few cents day/day.

Decreases extended through Louisiana, the Midcontinent and the Midwest. Texas also posted losses across much of the state, but small gains were seen in the western areas. El Paso Permian cash climbed 4.0 cents to $2.555.

The firm noted that Waha basis has tightened significantly month to date, averaging at only a 27-cent discount to the Henry Hub last week, versus 70 cents for the month of November. This was on a combination of an early cold snap followed by incremental outbound Permian capacity.

“With PHP on track to ramp to full operational capacity of 2.1 Bcf/d by early next year, we expect basis to remain tight through the first half of 2021 as production grows only marginally ahead of MPLX LP’s 2.0 Bcf/d Whistler Pipeline expected in Q321,” TPH said.

The addition of around 4.1 Bcf/d of capacity over the next nine months should see the basin remain well piped through 2023, according to the firm. This is, of course, barring a material ramp in upstream activity, “keeping differentials in check and limiting Permian to Gulf Coast midstream marketing opportunities.”