Natural gas futures found fresh footing on Monday, as traders mulled an updated relaunch timeline for a major export facility, railroad union members considered a strike, and forecasts pointed to another round of wintry weather in early December. 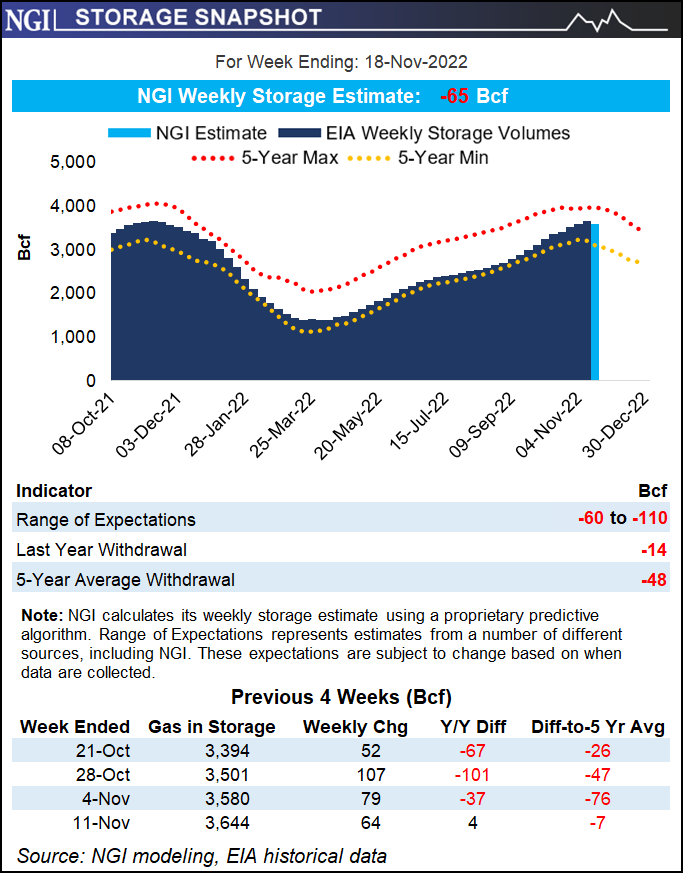 Executives at the Freeport LNG export plant in Texas, forced offline in June following a fire, said Friday they now anticipate they will begin to bring operations back online in mid-December. This came after the liquefied natural gas facility missed an earlier goal to return to service by mid-November amid ongoing repairs and work to secure regulatory approvals.

Management said reconstruction work necessary to commence initial operations, including utilization of all three liquefaction trains, was about 90% complete. They expected to complete repairs by the end of this month and updated their targeted relaunch to mid-December. The company expects to then ramp up to 2.0 Bcf/d of production capacity by January, with full restoration to 2.38 Bcf/d to follow. That final push may not happen until March, officials said.

This allowed the market to refocus on winter weather as “the leading short-term indicator for natural gas” prices in a holiday-shortened trading week leading to Thanksgiving on Thursday. He noted that forecasts shifted from calls for a moderate start to December to a “burgeoning cold pattern,” igniting Monday’s rally.

The cold would drive robust heating demand and, potentially, cause wellhead freeze-offs that could slow production. This could follow a harsh blast of winter over the past week that galvanized demand across much of the Lower 48 and dropped output by more than 2 Bcf/d from around 101 Bcf/d at the start of November.

Should widespread cold resume in early December, “a breakout to the upside” is possible, Rubin said.

NatGasWeather also anticipated another round of cold. Over the weekend, the American and European models trended warmer for Wednesday through Dec. 1, but the firm said forecasts “tease a colder pattern attempting to return Dec. 2-4.”

“Due to ongoing cold temperatures over the northern and central U.S., wellhead freeze-offs have dropped U.S. production by 2 Bcf/d-plus to 98-99 Bcf/d,” NatGasWeather added.

The winter conditions last week – including several feet of snow in western New York – led analysts to predict a robust withdrawal of gas from storage with the coming Energy Information Administration (EIA) inventory report. EIA is scheduled to release its latest data on Wednesday, a day earlier than normal because of the holiday.

Early estimates for the week ended Nov. 18 submitted to Reuters ranged from withdrawals of 60 Bcf to 110 Bcf, with an average decrease of 77 Bcf.

What’s more, a potential railway worker walkout next month could disrupt coal deliveries and boost demand for natural gas. The threat of a strike, averted earlier in the fall amid negotiations, resurfaced Monday after the largest freight rail union, SMART Transportation Division (SMART-TD), rejected a tentative agreement brokered by the Biden administration. It joined three other unions in voting down a labor deal with management.

“SMART-TD members with their votes have spoken: It’s now back to the bargaining table,” the union’s president, Jeremy Ferguson, said.

If unions and the railroads fail to reach an agreement by Dec. 8, workers could strike.

Spot gas prices advanced as bitter cold hung around much of the central and eastern United States in the wake of several weather systems, including a massive snowstorm that blanketed Buffalo and neighboring areas of western New York late last week and over the weekend.

AccuWeather said “mountains of snow lined roads and driveways” across the region on Monday “as residents began the arduous task of digging out from one of the most significant lake-effect events in recent history.” A suburban area south of Buffalo was buried beneath more than 6 feet of snow.

NatGasWeather said colder-than-normal temperatures would “rule most of the U.S. through Tuesday,” with lows ranging from the single digits to the 20s across northern markets.

Prices in the Northeast were uneven Monday, with some hubs posting losses after huge run-ups Friday. Others, however, powered further ahead and helped drive the national average. Tenn Zone 5 200L, for one, jumped $1.135 to average $9.195.

Chilly conditions impacted southern areas, too, with Houston experiencing seasonally frosty temperatures over the past several days and into this week, Space City Weather meteorologist Eric Berger said. The city and its surrounding region “experienced weather that is typical for the dead of winter, not late fall,” Berger said Monday. “Houston will face another chilly day or two before we start to warm up in time for Thanksgiving.”