After a brief dip into the red, March natural gas prices went on trade roughly 6 cents higher Wednesday as weather models converged on the intensity of a pair of cold weather systems expected this weekend and again next week. A late-session retreat, however, left the Nymex March gas futures contract flat at $2.662, while April picked up just seven-tenths of a cent to $2.657. 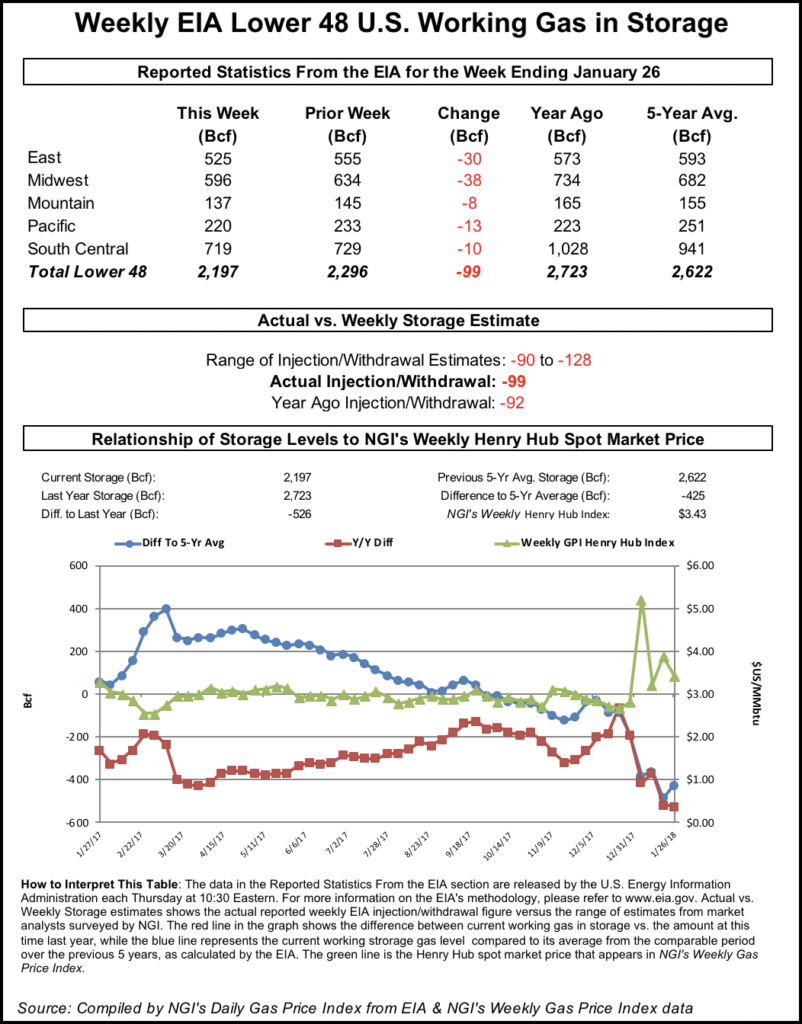 Spot gas prices strengthened even as much of the United States was forecast to remain mild for another day, with the coldest air remaining confined to the northern Plains. The NGI Spot Gas National Avg. rose 61 cents to $3.595.

On the futures front, Wednesday’s trading action was rather muted considering January and February are typically the coldest months of the winter season. March prices swung in a tight range of about 7 cents.

The lack of volatility stems from current mild conditions in place across most of the country, where the Ohio Valley and East were forecast to see high temperatures in the 40s and 50s again Wednesday, while the southern United States and Mid-Atlantic Coast were expected to reach highs in the 70s and 80s, according to NatGasWeather.

But chilly temperatures are on the way. A cold weather system was forecast to return to the Midwest and East this weekend, sending overnight temperatures back below zero in some areas and topping out in the 20s in others. This system — and another on tap for next week — sent the midday Global Forecast System (GFS) data trending notably colder, NatGasWeather said. Specifically, the GFS ensemble data added an impressive 25 heating degree days (HDD) versus Tuesday night’s run and 31 HDDs versus Tuesday’s midday run.

“The data continues to favor a chilly pattern across much of the United States Feb. 19-21, but still with inconsistencies on how much cold air will arrive into the South and East. We view the latest data as at least somewhat bullish; it would just look more impressive if not for the milder breaks between cold shots over the South and East that stand out,” the firm said.

For its part, Bespoke Weather Services said the pattern for late Week 2 into Week 3 looks to shift finally more toward a standard positive Pacific North American pattern as the Madden Julian Oscillation propagates, with a cold shift eastward. “This has us still favor colder risks overall into Week 3, which can continue to support the gas market as gas-weighted degree days will struggle to sustain below average here.”

Meanwhile, production has taken a small dip again, and Canadian imports are far lower as severe cold in Western Canada necessitates further demand up north, Bespoke said. Although liquefied natural gas exports were still at lows, which can keep cash weak, power burns were beginning to tighten up a bit at lower prices as well, seemingly putting in a floor for prices.

“While dips toward $2.65 are possible on any warmer models or weak cash, we still see $2.75 March as likely to be tested before the end of the week, and see the front of the gas strip as still modestly undervalued currently,” Bespoke chief meteorologist Jacob Meisel said.

Societe Generale analysts shared that sentiment, as the firm sees fundamental support for prices to retrace back to the $2.85-3.00 level through February and March, under anything other than a warm weather scenario. While the firm’s price view for the rest of the year has not changed, “there has potentially been a shift in speculative positioning that has reintroduced some dry powder into the market,” analysts said.

“We cannot be sure, as the U.S. government shutdown has delayed the release of Commodities Futures Trading Commission data, but if natural gas has become even a little bit oversold in this recent selloff, prices can retrace quickly off even a slight shift in sentiment,” Societe Generale natural gas analyst Breanne Dougherty said.

Still, market momentum is decidedly bearish, according to EBW Analytics. Bulls have hopes pinned on ultracold weather materializing for mid- to late February, which may still materialize.

“Without a credible threat of a supply adequacy crisis by the end of the withdrawal season, however, the March contract has faltered — and is likely to continue to struggle ahead,” EBW CEO Andy Weissman said.

To be sure, the market is looking ahead to what could be the largest storage withdrawal of the winter and could lead shorts to take profits in the near term. Estimates for Thursday’s Energy Information Administration (EIA) storage report point to a withdrawal in the high 240 to low 250 Bcf range.

A Bloomberg survey of six market participants had a withdrawal range of 222 Bcf to 253 Bcf, with a median of 247 Bcf. Bespoke projected a 253 Bcf pull, EBW expected to see a 245 Bcf draw and Kyle Cooper of IAF Advisors pegged the draw at 241 Bcf.

Last year, the EIA reported a withdrawal of 116 Bcf for the same week, and the five-year average draw stands at 150 Bcf.

As Thursday’s report may yield a Top 10 all-time withdrawal, the next two storage weeks feature 25 gas-heating degree days and 46 Bcf of above-normal demand, with extreme cold in the Upper Midwest, EBW said.

Even so, with general weakness in the cash market and no chance for a supply adequacy crisis, the fundamental reasons for a March premium to April become increasingly slim. “As long as the March contract remains at a premium, gas marketers have an incentive to increase near-term supply and send spot market prices even lower,” Weissman said.

Spot gas prices continued to climb in most regions outside the Northeast and Appalachia, with substantial gains continuing in the West as cold, wet weather, pipeline and storage restrictions, and strong demand has led to renewed volatility in the region.

Southern California demand is at its highest point in more than two years, and Southern California Gas (SoCalGas) has been making withdrawals from Aliso Canyon to support the higher loads, after issuing the required call for voluntary curtailments required by the current withdrawal protocol, according to Genscape Inc.

Meanwhile, pricing hubs in the Rockies put up significant gains of their own in response to the cold weather in the Pacific Northwest and the volatility in western prices. Pacific Northwest pipeline-reported demand spiked to a two-year high of more than 3.1 Bcf/d as daytime highs around Seattle fell to as much as 20 degrees below normal this week, Genscape said.

To serve that demand and compete with upstream demand markets and price gains, Sumas basis spiked to $19.46 on Wednesday, its highest point since the extreme blowout above $60 experienced in mid-November 2018. At that time, allowable flow on Westcoast Transmission was considerably lower because of capacity reductions following the explosion in early October, Genscape natural gas analyst Joe Bernardi said.

“Now, although Westcoast’s flow capacity is higher, so are its intraprovincial deliveries to southern British Columbia — resulting from much colder weather there now than in mid-November. This has created a different competition scenario to incentivize the Sumas basis price spike: Although more flowing supply is available, demand is much higher in both areas.”

Flows to the Pacific Northwest on the Northwest Pipeline are consistently running at or near 90% of capacity, while flows to Pacific Gas & Electric via Ruby Pipeline have topped the 1 Bcf/d mark in recent days, according to Genscape. Meanwhile, volumes to the Desert Southwest and Southern California via Kern River Gas Transmission have been running higher than 2.1 Bcf/d in the past couple of days.

With forecasts showing the colder-than-normal weather for the Pacific Northwest continuing through the end of this week, Northwest Sumas next-day gas rose $5.42 to $22.02, and Kingsgate climbed $8.35 to $14.39.

Outside of the West and Rockies, most pricing hubs across the country rose less than a dime or so. There were some exceptions, however. West Texas points moved up a quarter or more, while other Texas markets rose only a nickel or so.

At Waha, where prices had fallen to their lowest level ever on Monday and then to their second lowest level on Tuesday, gas for Thursday flow jumped 32.5 cents to 51 cents.

Disruptions to flows out of the Permian Basin are one factor contributing to the price declines, according to Genscape. A force majeure on El Paso Natural Gas Pipeline (EPNG) was cutting about 180 MMcf/d of Permian outflows, and a separate maintenance event that was in effect for several cycles Tuesday had been postponed to this weekend.

The “CORN HPW” meter — one of three flow points on EPNG out of the Permian through Cornudas — had its operational capacity reduced by 182 MMcf/d effective for Wednesday’s evening cycle and continuing until further notice. The “CORN HPW” point, along with the other two Cornudas points, usually flows at capacity, meaning that the operational capacity cut essentially translates to a scheduled flow cut, Genscape said.

Over in the Midcontinent, spot gas climbed 22.5 cents to $2.475 at Panhandle Eastern, one of three pricing hubs in the region to net a 20-cent-plus gain.