As some teachers and students headed back to the classroom, traders appeared to call an end to the summer for natural gas markets as well. With the latest weather models slicing more projected demand off the 15-day forecast, the Nymex September gas futures contract tumbled 47.5 cents to $7.589/MMBtu on Monday. October futures fell 47.3 cents to $7.578. 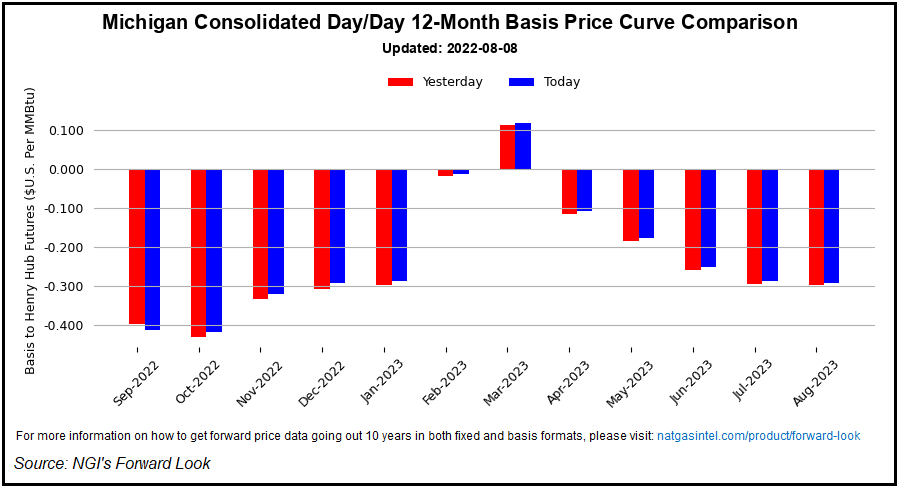 Spot gas prices were lower across most of the country despite continued widespread heat for another day or so. NGI’s Spot Gas National Avg. dropped 20.0 cents to $7.845.

After countless bouts of 90-degree temperatures popping up across the Lower 48 this summer, the latest weather models showed cooler weather set to begin this week lingering for most of the month. NatGasWeather said the Global Forecast System (GFS) shed 3 cooling degree days (CDD), while the European Centre model was down a heftier 9 CDDs.

The coming 15-day pattern is still “slightly bullish,” according to the forecaster, with national CDDs forecast to be above normal most days. However, with much more comfortable temperatures expected to arrive over the East Aug. 10-20, national demand won’t be nearly as intimidating as it has been the past six weeks.

“To that point, weather patterns could disappoint,” NatGasWeather said.

Meanwhile, production hit an all-time high of 98 Bcf/d last week and held near that level early Monday. The supply/demand balance already may be showing signs of loosening based on the most recent storage inventory data. Any cooler weather on the horizon could lead to more downside in the near term.

EBW Analytics Group agreed that signs are mounting that the near-term heat wave has crested, with bearish forecast shifts over the weekend erasing 11 CDDs for the last three weeks of August. As scarcity risks recede alongside peak summer heat, elevated summerlong power prices may begin to ebb, the firm said. This subsequently could drag gas prices lower as well.

It noted that technical indicators similarly point in a bearish direction, with a deeper consolidation still favored following the monstrous $4.00 surge in July. However, the potential to return 2.0 Bcf/d of demand at Freeport LNG by early October – ahead of consensus analyst expectations – remains the biggest fundamental development in recent days, according to EBW.

“As the market shifts its focus over the next 30-60 days from fading late-summer power sector demand to squarely focus on the upcoming winter ahead, a renewed surge in natural gas appears increasingly likely to carry prices steeply higher,” said EBW senior analyst Eli Rubin.

The liquefied natural gas export facility’s potential return in October effectively has lowered the storage trajectory throughout the winter and thus has raised EBW’s price forecast. It sees prices potentially soaring as high as $9.170 in the next 45 days and then possibly moving to $9.730 in the next three months. Its projected winter exit target, meanwhile, has fallen under 1.0 Tcf.

Spot gas prices continued to decline on Monday, extending their losses from late last week as the country’s midsection was expected to see more rain.

NatGasWeather said high temperatures were forecast to top out in the 60s to 80s in the Midwest over the next couple of days, while highs in the mid-90s would continue for major East Coast cities. Wind generation in Texas also proved to be light.

As such, Chicago Citygate next-day gas plunged 40.0 cents from Friday to average $7.455 for Tuesday’s gas delivery. Michigan Consolidated was down 41.0 cents to $7.385.

Similar losses were seen in the Midcontinent, while NGPL-Midcontinent dropped 46.5 cents to $7.200.

Wood Mackenzie said beginning Tuesday, Natural Gas Pipeline of America (NGPL) is declaring a force majeure because of pipeline remediation on the Gulf Coast #3 mainline between Compressor Station 304 (CS 304) in Harrison County, TX, and Compressor Station 303 (CS 303) in Angelina County, TX, on Segment 26. This would restrict operating capacity to 1,252,940 MMBtu/d from 1,586,000 MMBtu/d.

Several locations are to be unavailable for the duration of the force majeure, scheduled to end on Friday. Combined, up to 274,732 MMBtu/d would be shut in based on maximum scheduled flows at these locations over the past seven days.

Meanwhile, Wood Mackenzie said Gulf South Pipeline Co. would begin maintenance Tuesday on Harrisville Compressor Station and Index 129. The Harrisville maintenance would continue until Aug. 30 and could reduce Expansion Area 19 Delivery Group by up to 100,000 MMBtu/d.

The Index 129 maintenance is a one-day event for Tuesday, which could limit East Texas/North LA Receipts Group by up to 100,000 MMBtu/d.

Pipeline work had a bigger impact on cash markets across the border in Canada.

Westcoast is scheduled to perform a cap install on the Alberta mainline, cutting up 168 MMcf/d of eastbound flows through the 26 Alberta East constraint from Aug. 8-Oct. 7. This point represents eastbound flows from Westcoast toward delivery points with Nova Gas Transmission Ltd. and the Canadian portion of Alliance Pipeline.

Past 30-day max flows at this constraint were 167 MMcf/d and maxed out at 263 MMcf, according to Wood Mackenzie. For the duration of this maintenance, eastbound flow restrictions are to be applied to the commercial locations MS-165, 84, 134, as well as the Fort St. John and Ft. Nelson mainlines. However, from Aug. 14-Oct. 1, several other locations would be allowed to flow only to Gordondale delivery points.