Natural gas futures flew higher for the third time in four sessions as oppressive heat across most of the Lower 48 kept air conditioners cranking, and festering supply challenges in Europe bolstered the demand outlook for U.S. exports 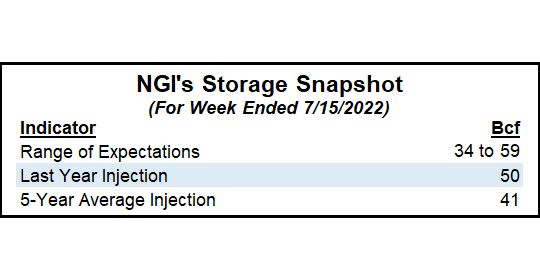 While forecasts shed a few gas-weighted degree days (GWDD) from earlier in the week, “it is still difficult to call the pattern remotely bearish, as we remain in hot mode, with a few record GWDDs expected at least in the near term,” Bespoke Weather Services said.

This month is on pace to rank among the top three hottest Julys on record, the firm said.

“Looking ahead,” Bespoke added, “we have little reason to think we will not see above-normal heat on into at least the first part of the month of August, keeping weather on the supportive side.”

With production modest through most of the summer and demand robust, markets will turn next to Thursday’s Energy Information Administration (EIA) storage report, which covers the week ended July 15, Bespoke said.

“Anything in the 30s Bcf would certainly be bullish,” the firm said, adding that any number in the high 40s Bcf or greater would likely invigorate bears Thursday, but not necessarily squash summer momentum for long.

“If August weather turns out wildly hot, which is possible, any dips would likely be bought, ultimately, as injections would remain low,” Bespoke said.

Analysts said Thursday’s action indicated traders were betting on such a development.

“Strong physical gas demand amid searing heat suggests that the next three storage reports” could show “total injections of under 100 Bcf,” said EBW Analytics Group’s Eli Rubin, senior analyst. “With thinning liquidity ahead of next week’s contract expiration, further upside for the August contract is likely.”

Ahead of the EIA report, major surveys pointed to a storage increase in the 40s Bcf.

Results of Bloomberg’s poll showed a median injection projection of 44 Bcf, with a low estimate of 34 Bcf and a high of 59 Bcf.

Reuters’ survey produced injection estimates that spanned 36 Bcf to 59 Bcf. It landed at a median of 48 Bcf.

A Wall Street Journal poll found an average injection expectation of 48 Bcf; it generated a range of 39 Bcf to 59 Bcf.

The estimates compare with a build of 50 Bcf during the same week last year and a five-year average injection of 41 Bcf.

EIA most recently printed an injection of 58 Bcf into natural gas storage for the week ended July 8. It lifted working gas in storage to 2,369 Bcf, yet stocks were 319 Bcf below the five-year average.

Meanwhile, aside from the Freeport LNG outage following a fire in June, U.S. liquefied natural gas export volumes have held strong in July amid robust demand from Europe.

Demand from the continent is likely to endure, given mounting worries that Russia may further scale back gas flows to Europe via the Nord Stream 1 (NS1) pipeline. Flows on the conduit have been reduced to zero since last week amid annual repair work.

The planned maintenance is slated to end Thursday, but Russian President Vladimir Putin told reporters while visiting Iran on Tuesday that if Kremlin-backed Gazprom PJSC does not receive a needed turbine from Canada, NS1 would likely resume flows at just 20% of capacity.

Putin said Western sanctions imposed against Russia after its invasion of Ukraine prevented the return of the turbine from Canada, where it had been sent for repairs. European officials have warned that Putin may use the turbine issue as the pretext for protracted natural gas cuts to Europe to punish the continent for opposing the war.

The European Commission (EC) on Wednesday unveiled a plan to cut natural gas consumption by 15% until next spring in anticipation of Russia curbing supplies over the long-term.

As the drama unfolds, countries across Europe are clamoring for U.S. LNG to help fill the void. Feed gas volumes at American facilities have held above 11 Bcf/d most of July. That puts export levels near capacity, excluding the Freeport plant, which remains offline.

Spot gas prices advanced again Wednesday – as they did each of the prior two sessions this week – amid robust cooling demand across the country, including major population centers in the East such as New York City and Philadelphia.

Prices popped at hubs in the volatile Northeast, in particular.

NatGasWeather said Wednesday that both the domestic and European weather models showed “impressively hot” conditions over the next nine days “as an unseasonably large and strong dome of high pressure rules most of the U.S. with highs of 90s to 100s.

“Temperatures will be hottest from California to Texas and across the Great Plains…while also hot with highs of 90s for major East Coast cities,” the firm added.

Such conditions are expected to persist into early August, aside from the far northern reaches of the Lower 48, “for strong to very strong national demand.”

Throughout much of this, Texas is likely to endure the most intense heat – at least in terms of heavily populated areas. The Southwest deserts also are cooking.

EBW Analytics noted that the Electric Reliability Council of Texas (ERCOT) reached its 10th peak load record of the year on Tuesday at an unofficial 79,621 MW. The grid operator cautioned that Wednesday could set another record.

Before this summer, the peak load record was 74.8 GW, EBW’s Rubin said. “As aging generators run flat out to maintain reliability, the growing fear of rising forced outages may catalyze reliability crises later this summer,” he added.