A very tight government inventory report sparked an initial rebound in natural gas futures on Thursday. But it was heat seen through the first full week of July and some technical drivers that sent futures surging later in the session. The July Nymex gas futures contract shot up 8.5 cents to settle at $3.418. August closed at $3.437, also up 8.5 cents on the day. 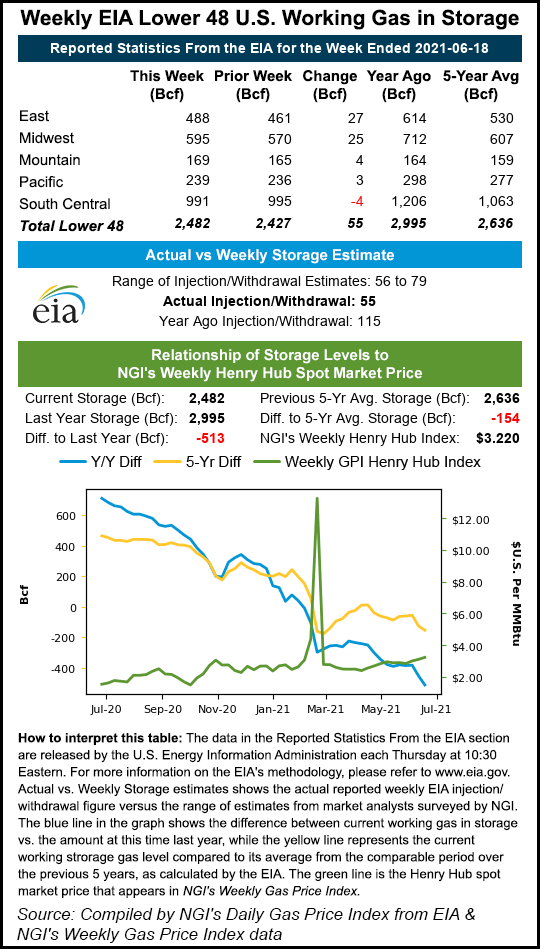 Spot gas prices also strengthened as hotter weather began to expand across more of the country. With potentially record-breaking temperatures in the Pacific Northwest and across the border in Canada, NGI’s Spot Gas National Avg. climbed 5.5 cents to $3.150.

Though still a couple of weeks shy of the core of summer, some early bouts of heat have provided enough momentum to move Nymex gas prices comfortably above $3.00. The latest storage data confirmed the stronger demand, as the Energy Information Administration (EIA) reported a modest 55 Bcf injection into storage.

The latest EIA figure was well below historical levels, coming in 60 Bcf below last year’s injection and 28 Bcf below the five-year average. It also was a tick below the lowest estimate in major surveys ahead of the report.

Bespoke Weather Services said the figure reflected “crazy tight” supply/demand balances, which it had expected. “How tight was the question.”

As it turned out, the combination of low wind and low nuclear output last week accounted for more than Bespoke estimated.

The EIA figure would promote end-of-season storage levels under 3 Tcf if extrapolated forward, according to the firm. “Obviously, that is not going to happen, as next week’s number will not be nearly as tight, thanks to higher wind and more nuclear output. But it is easier now to see why prices have been on such a march higher.”

Mobius Risk Group said load data from the Edison Electric Institute supported the sub-60 Bcf injection. Total U.S. power load rose a remarkable 11% year/year, posting one of the highest totals for a mid-June week in more than a decade.

“Considering wind generation last week was also an abysmal 11.8 GWh lower than the same week last year, natural gas-fired power demand was also supported by the need to fill in for peaky demand in Texas and Oklahoma,” Mobius said.

Broken down by region, the East injected 27 Bcf into storage, and the Midwest added 25 Bcf, according to EIA. The Mountain and Pacific regions each recorded builds of less than 5 Bcf.

The South Central region recorded a net 4 Bcf withdrawal, including a 4 Bcf decline in salt facilities and 1 Bcf injection into nonsalts, EIA said.

Total working gas in storage as of June 18 stood at 2,482 Bcf, which is 513 Bcf below last year and 154 Bcf below the five-year average, according to EIA.

Although a lighter figure is likely next week, Bespoke said it’s “unclear if it will be loose enough to put a halt to the price rally.

“Once the July contract broke that $3.38-3.39 area, which were early November and February highs, it really took off,” the firm said on The Desk’s online energy chat Enelyst.

EBW Analytics Group outlined several factors that could influence prices in the near term.

Contract expiration, it said, can often cause an uptick in volatility. The firm has noted a repeated trend of relative price strength in the last hour of trading into expiration.

Returning liquefied natural gas (LNG) demand also could reduce weekly storage injections by as much as 10-15 Bcf per week, according to the firm. Facility maintenance at Sabine Pass and Cameron helped cut LNG feed gas demand to average just 9.75 over the past three weeks, 2.5 Bcf/d below peak demonstrated levels.

On the supply side, EBW said June-to-date output is up 0.5-0.7 Bcf/d. This has occurred despite Texas Eastern Transmission’s reduction in pipeline pressure. Daily flow monitors suggest output wavered early this week, however, but notable daily aberrations make it difficult to separate signal from noise.

Of course, weather may trump everything. Extreme temperatures could yield large Pacific Coast power burns this weekend, according to EBW. However, largely seasonal-to-cool weather over the central United States, Texas, Florida and the Southeast could keep a lid on power burn.

Weekly average cooling demand could remain 2.5 Bcf/d or more below last week’s levels until the July 4 holiday, potentially softening near-term upward pressure on natural gas prices. Meanwhile, there are some early signals for heat in the Northeast in July, but those remain far from definitive, according to EBW. “Further, even if heat does occur, higher humidity and odds for cooling rains could keep the national outlook from warming too far.”

There’s no sugar-coating the “unprecedented magnitude and duration” of a looming heat wave that AccuWeather and other forecasters are predicting for the Pacific Northwest this week.

Triple-digit temperatures are expected throughout parts of Oregon and Washington. Portland could crack the mercury at the 110-degree mark. Seattle, which is expected to top 100, could experience temperatures around 30 to 40 degrees above normal and challenge daily record highs.

The dangerous heat is forecast to peak from Saturday through Monday as high pressure settles in and enables temperatures to climb to new heights, according to AccuWeather.

“There are typically a few rounds of heat in the Pacific Northwest each summer, but this particular heat wave looks quite extreme,” said AccuWeather meteorologist Brian Thompson, who regularly analyzes weather patterns in the West.

Average highs in June can be anywhere from the 70s in eastern Washington and Oregon to the 80s in western areas into Idaho. The all-time record high of 118 degrees may be approached in Washington Sunday and Monday, according to AccuWeather. Oregon can also reach its own all-time record of 117.

“When the jet stream behaves this way the air at mid- and upper levels of the atmosphere becomes very warm,” explained AccuWeather senior meteorologist Alex Sosnowski. This upper-level heat can allow the surface to easily heat up.

Maxar’s Weather Desk similarly painted a sweltering outlook for the normally mild weather region. “It’s hard to overstate just how extreme the Saturday-Monday heat event looks to be in the Northwest.”

However, the forecaster said the latest weather models reflected cool changes in the Southwest amid increased monsoon activity. The rest of the West is expected to remain under “above to strong-above normal” temperatures, especially in the Northwest and northern Rockies.

“The Northwest heat is not as strong as the all-time record-challenging heat expected in the late 1-5 Day,” Maxar’s said. “The Southwest could push warmer than expected if drier conditions come to fruition.”

Interestingly, spot gas prices in much of the Pacific Northwest failed to reflect the scorching conditions ahead, at least not yet. There were some pricing hubs that recorded gains. Transwestern San Juan next-day gas climbed 14.0 cents to $3.170.

Points along El Paso Natural Gas Pipeline also posted similarly sharp gains, though maintenance along that line may have contributed to the gains. In Arizona/Nevada, El Paso S. Mainline/N. Baja was up 20.5 cents to $3.965.