In one of the most explosive sessions in recent weeks – and that’s saying a lot – natural gas futures rocketed higher Monday as production struggles to gain momentum and heat is starting to intensify ahead of what’s expected to be a hot summer. 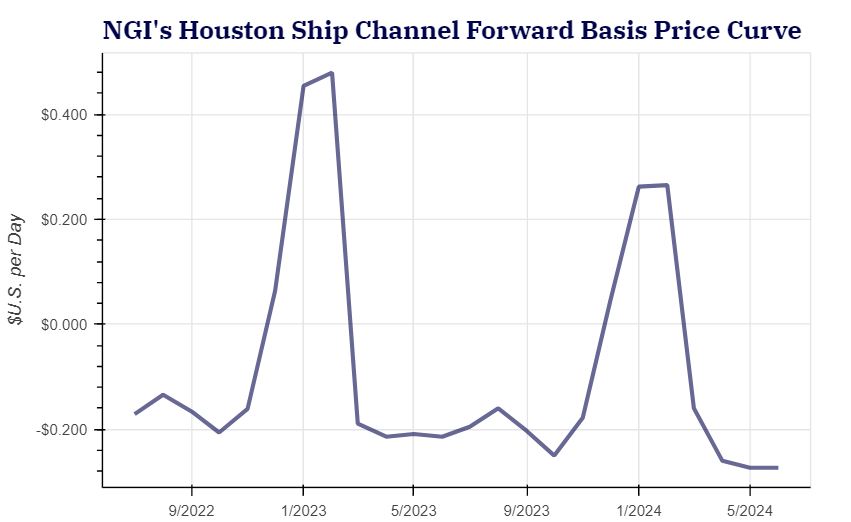 With forecasts calling for heat to become more widespread later this month, traders took notice of the potential for highs in Texas to surpass the century mark for the next seven days in some cities. The electric grid operator for most of Texas – the Electric Reliability Council of Texas – said the sweltering conditions could drive loads to a near-record level above 74,000 MW on Monday and Tuesday. At the same time, wind generation was expected to falter, dropping by more than 100 gigawatt hours/day.

Meanwhile, production has been a source of frustration for the gas market. After nearing late-2021 highs early last week, output softened later in the period and failed to recover over the weekend. Estimates showed production at around 95 Bcf on Monday, 2 Bcf shy of the highs largely viewed as needed to loosen up supply/demand balances.

What’s more, Tennessee Gas Pipeline (TGP) said it would be performing major pig runs on a part of its system on Tuesday and Thursday, limiting gas flows heading toward the Northeast. TGP said operating capacity on segment 321 FH would be limited to 880 MMcf/d from 1.93 Bcf/d on those two days.

“Current eastbound flows through STA321TOMLV324 have averaged 1.51 Bcf/d for the past 30 days and have recently maxed at 1.61 Bcf/d for Monday’s gas day,” said Wood Mackenzie analyst Young Liu. “This means anywhere between 630 MMcf/d to 750 MMcf/d can be restricted through segment 321 FH and will significantly impact flows into the Northeast on the 300 Line.”

The increase in gas demand and lower production comes amid a mostly steady rise in exports following spring turnarounds. NGI data showed feed gas deliveries to U.S. liquefied natural gas (LNG) terminals sitting at around 12.8 Bcf at the start of the week. This was off slightly from the 13 Bcf level reached over the weekend, but generally in line with volumes seen the rest of the past week.

“At this rate, we could see total LNG deliveries hit 14 Bcf/d if Sabine Pass returns to its max observed levels above 5 Bcf/d,” Shah told NGI.

Meanwhile, Mexican exports are expected to be 7 Bcf on Monday, according to the analyst. Gas flowing south of the border into Mexico could see incremental gains in the coming months as summer heat escalates.

Bespoke Weather Services said with the hotter weather already materializing in Texas and the South, it expects the more widespread heat pattern to be verified by the middle of the month. With production failing to reach new highs, it expects price gains to continue.

“We would not be shocked to see a test of $10.00 in the fairly near future, based on all we see from the big picture,” Bespoke said.

Over the next month and a half, weather catalysts may strengthen amid the seasonal transition from the shoulder season into mid-summer, EBW added. Hurricanes also threaten Gulf of Mexico supply and LNG demand alike.

Against that backdrop, it is possible that rising margin requirements could thin liquidity and further amplify price volatility, Rubin said. “Traders may be advised to buckle up for a volatile summer ahead.”

Though the most intense heat was concentrated in the southern United States, large price gains were seen across the country.

The National Weather Service said a wave of low pressure and associated front would produce showers and thunderstorms from parts of Nebraska to the Texas Panhandle on Tuesday, with some of the thunderstorms becoming severe. Meanwhile, upper-level ridging and dry soils would combine to allow temperatures to rise to record levels over parts of the more central and southern parts of Texas, with high temperatures forecast to reach the low 100s.

On the West Coast, cash prices also rallied while a major pipeline in California started a weeklong maintenance event. Wood Mackenzie noted that day/day receipts through Southern California Gas’ (SoCalGas) Northern Zone have been cut by 283 MMcf/d, with Line 225 going out of service Monday through Friday. The cuts are mainly at the Wheeler Ridge subzone, which dropped by 433 MMcf for Monday and have decreased by a total of 719 MMcf/d since Friday (June 3).

“In the notice relating to this maintenance, SoCalGas noted that some cuts to flows will be offset by a 210 MMcf/d capacity increase for the Northern Zone,” Wood Mackenzie analyst Quinn Schulz said. “Since June 3, flows through the Needles/Topock Zone have increased by 185 MMcf/d, with day/day flows through Kramer Junction increasing by 156 MMcf/d for June 6. Past 30-day flows through Wheeler Ridge were 635 MMcf/d and maxed out at 801 MMcf/d.”The restriction lifted SoCal Citygate next-day gas by more than $1.020 to average $9.705.