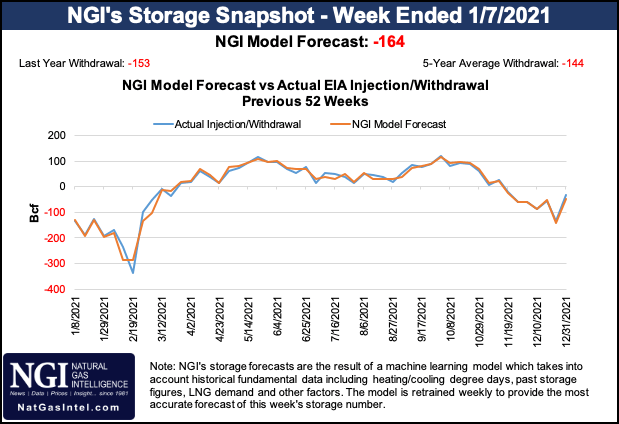 While production estimates climbed back up to 94 Bcf on Wednesday from 92 Bcf to start the week, output still remained about 2 Bcf below late-2021 highs following freeze-offs early this year that curtailed producer activity.

At the same time, following harsh blasts of winter to start January, forecasts on Wednesday called for the coldest weather of winter, on a national level, to permeate the Lower 48 over the final 10 days of this month.

Forecasts showed the “strongest demand so far this winter season” during that stretch, NatGasWeather said. “Frigid Arctic air over Canada will advance aggressively into the U.S. late next week into the following week,” ushering in exceptional cold over a majority of the country. Some areas could endure bouts of lows more than 20 degrees below zero, the firm said, and freezing conditions could push as far south as Texas.

“Both major weather models now forecast widespread lows of -20s to 20s over the northern two-thirds of the U.S.” beginning Jan. 21, NatGasWeather said at midday Wednesday.

Europe is wrestling with a severe supply crunch following a prolonged period of exceptional demand in 2021. Anticipated flows of extra gas via pipeline from Russia were expected to ease the continent’s troubles ahead of winter. But political turmoil between Russia and Ukraine resulted in a 25% drop in Russian gas supplied to Europe during the final three months of 2021, according to the International Energy Agency. That left Europe starved for gas and clamoring for U.S. shipments of LNG.

American supplies of the super-chilled fuel have provided some stability to Europe, Rystad Energy senior analyst Emily McClain said Wednesday. However, “geopolitical tensions between Russia and Ukraine are an ever-present storm cloud,” she said, “a factor that may set the scene for continued weak flows from Russia to Western Europe throughout the first half of the year.”

That could propel robust demand for U.S. exports through the winter and beyond to build supplies.

The freezing conditions in the United States combined with export demand galvanized expectations for a triple-digit withdrawal from storage with this week’s Energy Information Administration (EIA) report.

For the next EIA report, scheduled for Thursday, NGI predicted a 164 Bcf withdrawal for the week ended Jan. 7. The year-earlier print was 153 Bcf, while the five-year average is a pull of 144 Bcf.

A Bloomberg survey found withdrawal estimates ranging from 164 Bcf to 190 Bcf, with a median pull of 178 Bcf. The median estimate of a Reuters poll was a decrease in storage of 175 Bcf. Estimates spanned 147 Bcf to 186 Bcf.

EIA last week reported a withdrawal of 31 Bcf natural gas from storage for the week ended Dec. 31. The withdrawal for the final week of 2021 left U.S. inventories at 3,195 Bcf. Stocks were 96 Bcf above the five-year average.

Spot gas prices shot higher across the country, boosted by widespread gains in the Midwest ahead of harsh weather expected there later in the week.

NatGasWeather said demand would likely prove light Thursday through Friday as “a warm break sets up across most of the U.S. with highs of 40s to 70s besides the colder Great Lakes and Northeast, where highs will be in the 10s to 40s.”

The firm said another “cold shot will sweep across the northern U.S. this weekend,” with lows ranging from below zero to the 20s, including over much of the Midwest, followed by another milder break over most of the U.S. early next week with highs of 30s to 70s.

After that, however, brutal cold could permeate the country. “Very cold air will spread across the northern U.S.,” pushing overnight lows far below zero at times, while also pushing chilly air into the southern United States, with lows ranging from the 20s to the 30s.

“A strong ridge over the eastern Pacific and Alaska is the primary influence on the pattern, directing air masses from the polar region toward the Midwest, South and East,” Maxar forecasters said.