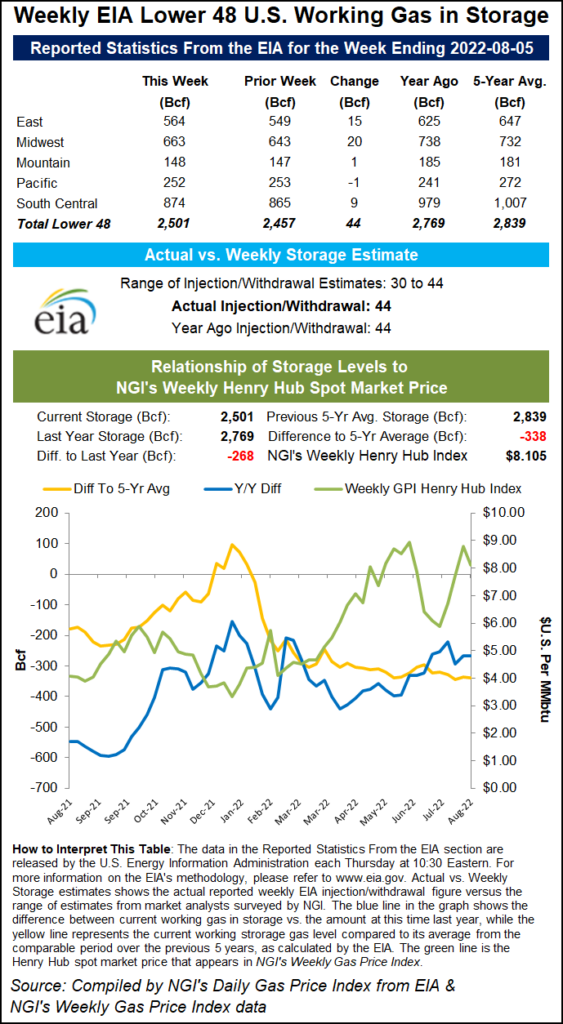 The build ultimately had little bearing on prices. Futures were trading sharply higher ahead of the EIA report because of further day/day declines in production. Choppy price action was seen after the data was published.

The September Nymex futures contract was trading 14.0 cents higher day/day at around $8.340/MMBtu in the minutes before the EIA’s storage data was published. As the print hit the screen, the prompt month slid to about $8.30. By 11 a.m. ET, however, it was at $8.390, up 19.0 cents from Wednesday’s close.

By region, the South Central delivered the biggest surprise to the market with a net 9 Bcf increase in inventories, according to EIA. This included a 10 Bcf build in nonsalt stocks and a 2 Bcf withdrawal from salts.

Storage inventories elsewhere rose by 20 Bcf in the Midwest and by 15 Bcf in the East, according to EIA. The Mountain region picked up 1 Bcf, while the Pacific lost 1 Bcf.

Participants on the online energy discussion platform Enelyst noted that wind generation was much stronger during the reference week when compared to the current week.

Production also hit fresh highs at around 98 Bcf/d last week before succumbing to maintenance in recent days. Bloomberg data showed output down to around 96.5 Bcf/d on Thursday.

“Surprising the East/Midwest are waiting this late into the year,” said one Enelyst participant.