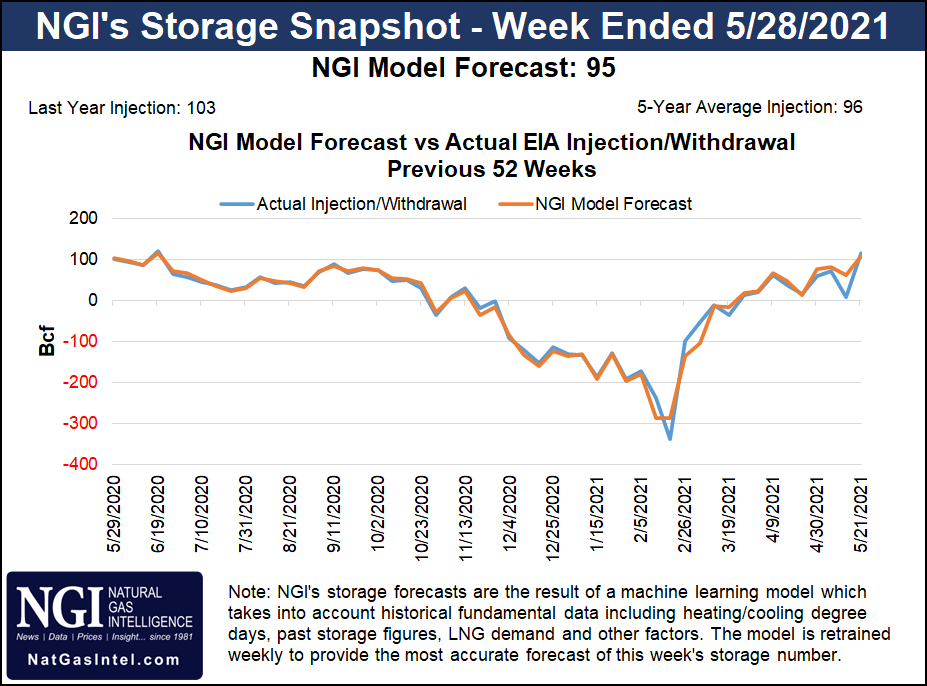 Spot gas prices continued to strengthen across most of the country, though Southern California recorded steep losses despite the continuation of record heat. NGI’s Spot Gas National Avg. ultimately went unchanged at $2.850.

As for futures, the July Nymex contract fell early. Though some pullback was expected after the sharp spike on Tuesday, the losses were cemented once revisions in the production came to light. As of Wednesday, the majority of the 2 Bcf day/day decline was erased, according to Bespoke Weather Services.

However, the news of Texas Eastern Transmission’s (Tetco) force majeure that reinstated a 20% pressure reduction and reduced southwest flows out of Pennsylvania remained front and center. Wood Mackenzie analyst Dan Spangler said flows would be cut by up to 1 Bcf/d, similar to the restrictions implemented last summer following the Danville explosion in the summer of 2019.

The pipeline is also capping flows north through Pennsylvania at the Uniontown compressor station to 2.7 MMcf/d. “While this capacity is higher than recent flows, it constrains an outlet for gas that would otherwise be able to travel southwest,” Spangler said.

Tetco’s pressure reduction is because of an amended corrective action order from the Pipeline and Hazardous Material Safety Administration (PHMSA). Tetco indicated that PHMSA had “temporarily approved” the pipeline company’s ability to recommence operations at its “full maximum operating pressure” as of late December 2020 following the completion of its remedial work plan.

However, in the most recent approval process, PHMSA declined to renew the temporary approval. Tetco said it has “engaged PHMSA to fully understand their concerns and what actions are required to return the system to its full operating pressure.”

Storage also remained a hot-button issue, with the last couple of storage injections disappointing the market and early projections calling for another sub-par build.

Estimates ahead of Thursday’s Energy Information Administration (EIA) inventory report were wide ranging but consensus pointed to an injection that could fall below both last year’s 103 Bcf injection and the 96 Bcf five-year average.

Reuters polled 17 analysts, whose estimates ranged from a build of 86 Bcf to 107 Bcf, with a median of 95 Bcf. A Bloomberg survey of 11 analysts had a tighter range of projections, but landed at a median of 94 Bcf. The average estimate of a Wall Street Journal poll also was 94 Bcf.

Working gas in storage as of May 21 stood at 2,215 Bcf, which is 381 Bcf below the prior year and 63 Bcf below the five-year average, according to EIA.

Even with the possibility that storage balances remain largely in check with the next EIA report, most market participants would agree that winter 2021-2022 carries some significant risks. Mobius Risk Group said the upcoming winter is poised to be the first in more than a decade in which pre-season inventory levels are less than 3.5 Tcf, along with tight weather-adjusted supply/demand conditions.

“Interestingly, the March/April 2022 spread currently sits at plus 40 cents, or roughly a dime lower than where it was in mid-February, and 8 cents lower than its late October 2020 peak,” Mobius said.

The contraction of this “bull spread” has been spurred by a rally in summer 2022 (April-October) relative to winter 2021-2022, according to the firm. The winter 2021-2022 strip currently sits on top of the $3.25 mark, which is a level it has reached three times since late October, yet failed to move through.

The Houston firm also pointed out that recent Commodity Futures Trading Commision Commitment of Traders data shows that from early April to mid-May, the ‘Other Reportables’ category essentially doubled its net short position. This category is assigned to many hedge funds and classically defined speculative traders.

“It is possible that the past two sharp rallies (May 17 and Tuesday) have been fueled by short covering, with a more sustainable fundamental rally yet to come,” according to Mobius. “Of course, as always, weather will remain the undefeated heavyweight champ of the natural gas market.”

Though the official start of the summer season is still weeks away, significant heat in the forecast for next week has garnered some momentum for natural gas futures.

Weather models so far have largely maintained the warm outlook, according to Bespoke, but recent data indicates that the core of the heat would move back toward the Rockies and Plains around the middle of the month. This would mean less heat in the key eastern population centers.

“We believe this is a real risk, though again, even factoring in five- or 10-year normal beyond day 15 would still give us a top 5 hottest June on record, per national gas-weighted degree days, thanks to the heat we see next week,” Bespoke said.

Interestingly, Texas remains the laggard, according to the forecaster, as all of next week’s heat is to the north. From the Midwest to East, 90-degree temperatures are expected as far north as Minneapolis to Boston.

NatGasWeather said the 15-day outlook remained “plenty hot enough” for June 6-12. However, like the overnight European model, the latest Global Forecast System shed a few cooling degree days for the 10- to 15-day period by weakening strong upper high pressure enough to drop temperatures by several degrees over much of the country.

“The weather data needs close watching for this important June 13-17 period because any further cooler trends, and it could lead to disappointment,” NatGasWeather said.

Spot gas prices across much of the country remained on their upward track despite a few more days of relatively mild temperatures and light demand.

The exception was in Southern California, where steep declines were seen for Thursday’s gas day even as persistent upper-level ridging was set to bring at least two more days of potentially record-breaking heat from the Southwest to the northern Great Basin.

High temperatures are forecast to reach the upper 90s and triple digits across a wide-spanning region from the Desert Southwest to the northern High Plains, according to the National Weather Service (NWS). The largest temperature anomalies are forecast to be over interior sections of Oregon and Washington, where highs could soar to near 30 degrees above normal.

Additionally, much of the Southwest and West are experiencing severe to exceptional drought conditions, which would undoubtedly be exacerbated by the current heat wave, NWS said. By Thursday evening, however, a weak cold front is expected to reach the Pacific Northwest and offer some relief from the early-season heat, along with a few isolated showers and thunderstorms.

A couple of pricing locations in the Rockies also retreated a bit on Wednesday, including Kingsgate, which slipped 2.5 cents to $2.675. However, the majority of market hubs continued to strengthen day/day, with gains of as much as 9.0 cents at Northwest S. of Green River, which averaged $2.945.

Spot gas prices across Texas also softened amid increasing cloud cover that was expected to give way to (more) rain later this week.

In the Midwest, Chicago Citygate cash edged up a half-cent to $2.965 and in the Midcontinent, Panhandle Eastern tacked on 2.5 cents to $2.830.