Natural gas traders were on high alert Tuesday as Hurricane Laura churned toward the Gulf Coast, with impacts to supply and demand reverberating across the market ahead of the storm’s projected landfall late Wednesday or early Thursday. 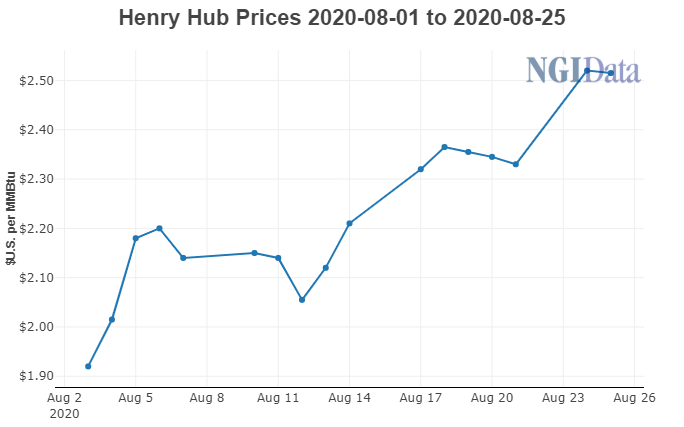 Volatility was on full display, with the September Nymex gas futures plunging to an early $2.451 intraday low before rebounding a bit to settle Tuesday at $2.489, off 2.4 cents from Monday’s close. October slipped 2.0 cents to $2.596.

After pulling off another notable gain on Monday, Nymex futures were poised to retreat a bit, even with production, mostly offshore, being curtailed ahead of Laura. That’s largely because LNG demand also took a meaningful hit, with Cheniere Energy Inc. temporarily suspending operations and evacuating personnel from the Sabine Pass terminal in Louisiana. Cameron LNG also was receiving lower volumes into its nearby terminal as it reduced operations.

“LNG cargoes in and out of the Gulf have already ceased and will likely lead to a drop of LNG feed gas from 5.1 Bcf Monday to 3-4 Bcf in the days ahead,” said NatGasWeather. “Essentially, while production losses will be near to slightly greater than 2 Bcf/d, LNG feed gas and demand destruction from clouds, rain, cooling and power outages are likely to offset.”

However, Mobius Risk Group pointed out that considering the September contract expires on Thursday, and market expectations call for a sizable increase in LNG feed gas demand in September, such disruptions to supply and demand “may cause confusion regarding the fair value for methane molecules” next month. Adding to this challenge are large swings in downstream markets in Europe and Asia, the firm said.

On Monday, the front of the Title Transfer Facility (TTF) curve was up a little under 30 cents, according to Mobius, and likely a factor in pushing up the front of the Nymex curve. “In contrast, the October Japan Korea Marker contract fell from $4.22 last Tuesday to a Friday low of $3.70, and then on Monday, it bounced back 20 cents higher.”

TTF futures continued to “explode higher” Tuesday, according to NatGasWeather analyst Andrea Paltrinieri, which theoretically should lend support to U.S. gas prices. But with LNG expected to drop considerably in the days ahead, this could eventually weigh more heavily on the market depending on how long it takes for ships to return.

In its 4 p.m. CT update, the National Hurricane Center (NHC) said Laura was on track to move over the northwestern Gulf of Mexico Wednesday, approach the Upper Texas and Southwest Louisiana coasts Wednesday night and then move inland near those areas into Thursday morning. Maximum sustained winds were near 80 mph with higher gusts, with significant strengthening expected. Laura was forecast to reach Category 3 status at landfall but then rapidly weaken, according to NHC.

The Bureau of Safety and Environmental Enforcement on Tuesday reported that personnel had been evacuated from 299 production platforms, representing about 47% of the 643 manned platforms in the Gulf of Mexico (GOM). Personnel had been evacuated from 11 nondynamically positioned rigs, and 16 dynamically positioned rigs were moved off location out of the storms’ projected paths as a precaution.

BSEE estimated that about 84% of the current oil production and around 61% of the natural gas production in the GOM had been shut-in.

Once the storm passes, weather is expected to remain front and center for the gas market, with cooler outlooks not boding well for unusually plump Lower 48 stocks.

As of midday Tuesday, models were showing weather systems sweeping across the northern and central United States in the final days of August and early September. “The southern United States and up the East Coast will still be very warm, but national demand won’t be as strong with the northern and central U.S. mostly comfortable and not fully participating,” NatGasWeather said.

Energy Aspects said its weekly balances point to an end-September carryout slightly above 3.80 Tcf, a level more common at the end of October. Unless production sees a steep fall in October or LNG feed gas ramps up even higher than its 7.5 Bcf/d assumption, the firm views stocks heading into winter at near 4.0 Tcf.

As of Aug. 14, the Energy Information Administration showed total working gas in U.S. storage at 3,375 Bcf, 595 Bcf higher than last year at this time and 442 Bcf above the five-year average of 2,933 Bcf.

Spot gas prices across the country were starting to come down ahead of Laura’s landfall. The majority of South Louisiana hubs posted double-digit declines, but Henry Hub slipped only a half-cent to $2.515.

Although temperatures are forecast to warm through Thursday in the eastern United States, spot gas prices posted some of the most substantial losses. Tennessee Zn 4 Marcellus plunged 25.0 cents to $1.105, and Transco Zone 6 non-NY dropped 22.5 cents to $1.655.

Spot gas prices in the Rockies barely moved, while SoCal Citygate surged some 52.0 cents to $4.835 as heat continues suffocating the region.

On the pipeline front, Texas Eastern Transmission (Tetco) recently issued an operations update stemming from the explosions on its system in Danville and Owingsville, KY. Beginning Sept. 21, Tetco would add between around 100-200 MMcf/d of capacity on its 30-inch diameter system from Wheelersburg, OH, to Tompkinsville, KY. Additionally, eastbound capacity at the Delmont, PA, compressor will be increased by roughly 120 MMcf/d beginning Thursday.

“However, there will be no increase in capacity at Uniontown, PA, which is still the biggest constraint in the entire Tetco remediation program,” Genscape Inc. analyst Josh Garcia said. “Capacity will remain at 2.66 Bcf/d, far below last summer’s capacity of 4.15 Bcf/d.”

Tennessee Gas Pipeline Company LLC declared a force majeure for compressor stations 32 and 823 due to evacuations in Louisiana. Pipeline operator Kinder Morgan Inc. also had suspended operations at the International Marine Terminal in Port Sulphur, LA, and reduced operations at the Harvey Terminal, in Harvey, LA.