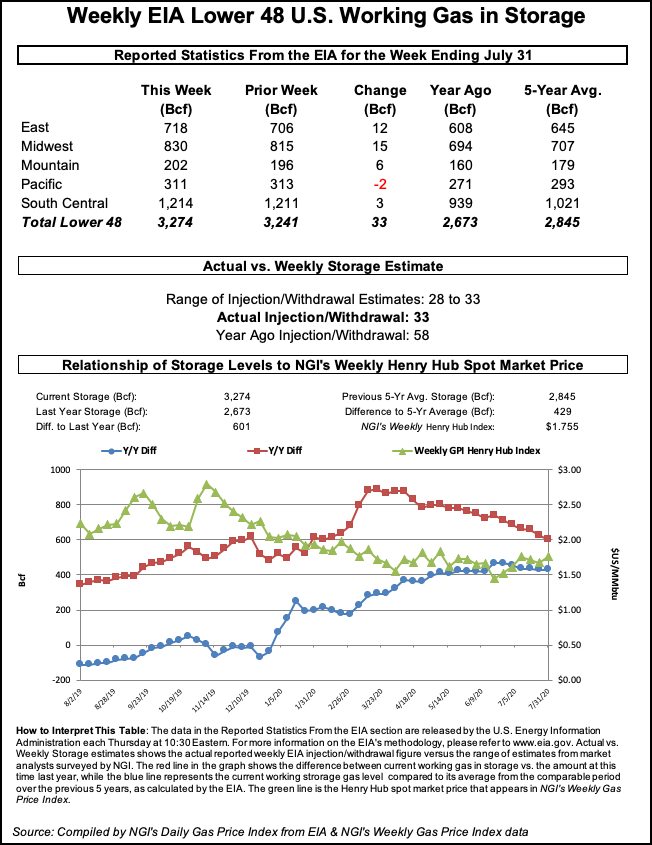 Spot gas prices softened across the board as well, dragging down NGI’s Spot Gas National Avg. 8.0 cents to $1.830.

After a stunning rally to start the week, Nymex futures had been expected to retreat a bit, especially with cooler weather in the forecast. While Wednesday’s price action failed to move the needle, bears got the upper hand on Thursday after the latest government data pointed to a market that remains “woefully oversupplied,” according to NatGasWeather.

The Energy Information Administration (EIA) reported that inventories for the week ending July 31 rose by 33 Bcf, which came in far below last year’s 58 Bcf injection but was exactly on par with the five-year average.

This is important to consider, NatGasWeather said, because “cooling degree days were solidly hotter/greater than normal, which is indicative of a market still solidly oversupplied.”

Price action following the EIA report was swift. In the minutes leading up to the report, the September Nymex contract was trading at $2.245, up 5.4 cents from Wednesday’s close. Earlier, it had soared as high as $2.284. As the print crossed trading desks, the prompt month slipped to $2.225, but then it bounced around as traders attempted to digest the data.

Looking ahead to next week’s EIA report, analysts expect a heftier build of about 50 Bcf as temperatures have cooled and East Coast power demand has been crushed by former Hurricane Isaias. This would put the end-of-season figure at or above the top of the seasonally adjusted range, Schork noted. “That is not a bullish thing.”

On the supply front, Gulfport Energy Corp. said it would continue to curtail Appalachian gas production in anticipation of better prices later this year and into 2021. The company made the decision during the second quarter to shut-in some Utica Shale gas volumes along with vertical oil wells in the South Central Oklahoma Oil Province (SCOOP) because of low liquids prices. Nearly all of the SCOOP wells have returned to production.

Meanwhile, Permian Basin associated gas production has been above 11 Bcf/d for a few weeks now after plunging to around 10 Bcf/d after the oil downturn. Still, that’s about 1 Bcf/d below the highs seen earlier this year, and analysts generally expect output to hold around 11 Bcf/d for the remainder of the year.

As for exports, the tides may be turning as liquefied natural gas (LNG) cargo cancellations are seen declining for the remainder of the year. Cheniere Energy Inc. CEO Jack Fusco, while stopping short of detailing the number of cargoes canceled during the second quarter, indicated he was “encouraged that dynamics in the LNG market are improving and unfolding as we have expected.”

While customers couldn’t turn a profit at such low global price levels, Cheniere earned $708 million in fixed fees from those opting out of lifting scheduled volumes.

For now, feed gas deliveries to U.S. LNG terminals remain around 4 Bcf/d, but some analysts have indicated a move back above 6 Bcf/d by October is not out of the question, with further advancement from there.

Spot gas prices were lower across most of the country Thursday as cooler weather was left in the wake of Isaias, namely on the East Coast, where daytime temperatures were expected to hold in the 70s and 80s.

Regionally strong demand was seen persisting over the western and southern United States as hot upper high pressure keeps highs in the 90s to 100s, according to NatGasWeather. National demand is forecast to increase this weekend and next week as high pressure regains territory over the central and northern states, with highs in the mid-80s to lower 90s returning from Chicago to New York City. At the same time, hot and humid conditions are expected to continue across the southern United States, with temperatures soaring into the 90s and 100s to aid strong national demand, the forecaster said.

Small losses also were seen throughout the Midwest, where Chicago Citygate fell 1.5 cents to $1.935.