A seemingly unwavering warmer-than-normal pattern through the first half of January continued to pressure natural gas futures lower as traders returned to their desks to kick off 2020. The February Nymex contract slid 6.7 cents to settle at $2.122/MMBtu Thursday, near the session’s low of $2.116. March settled at $2.093, down 6.5 cents. 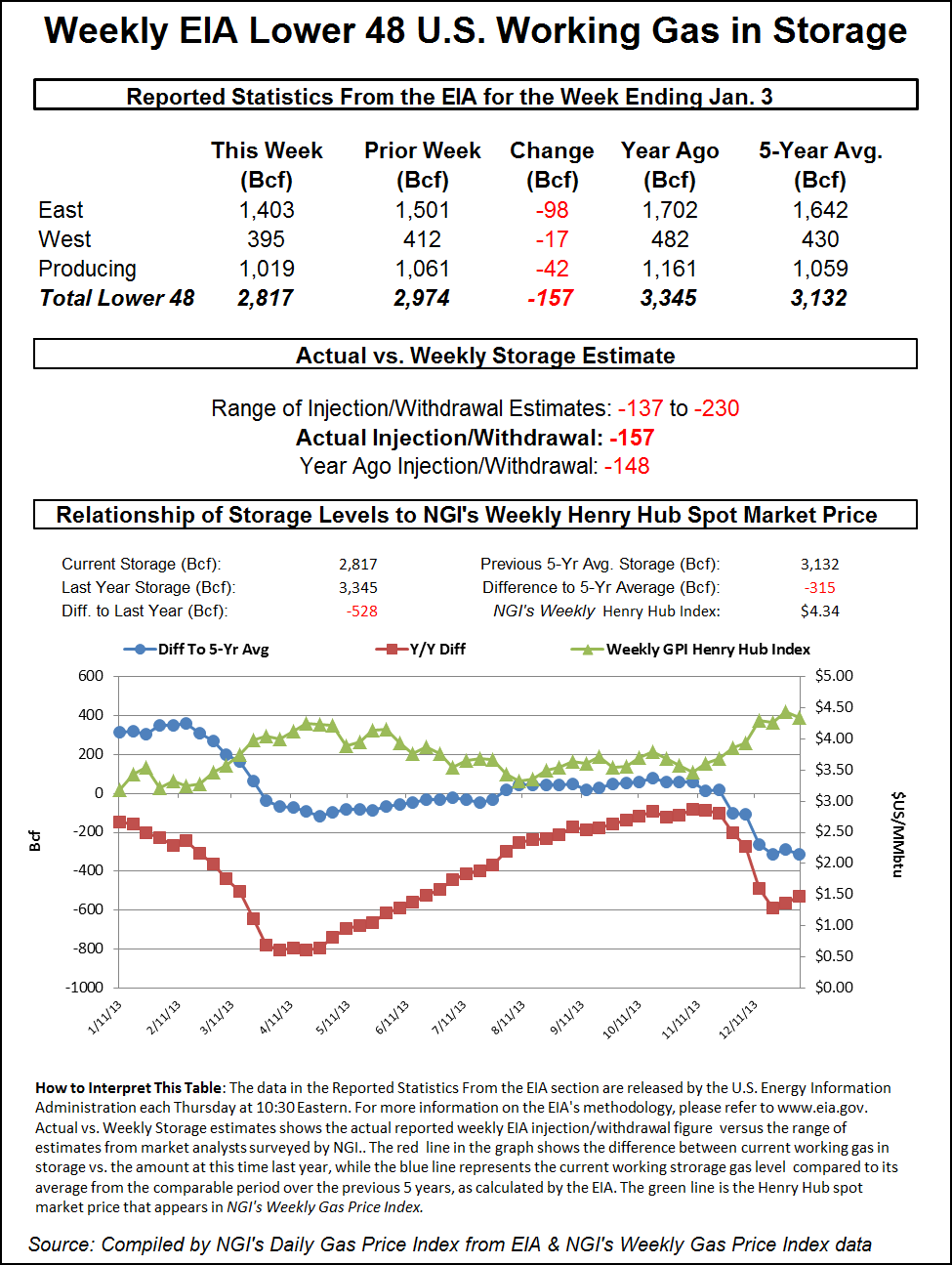 In the spot market, widespread mild temperatures encouraged discounts for most of the country, including double-digit declines in the Rockies and California; NGI’s Spot Gas National Avg. tumbled 14.5 cents to $1.915.

The midday Global Forecast System (GFS) run added several heating degree days back to the outlook but remained “little changed” compared to 24 hours prior, according to NatGasWeather.

“The latest GFS still forecasts an exceptionally bearish pattern through Jan. 15 besides a brief cold shot” for the northern portions of the country around the middle of next week, the forecaster said.

While guidance Thursday was “far from cold enough” through the first half of the month, the pattern held potential for some cold air from Western Canada to make its way into the United States beyond Jan. 15. “It will need to be convincing to turn bearish weather sentiment bullish, and it will also require the European model to be on board with a colder pattern if it’s to be believed,” NatGasWeather said.

Further out in the Jan. 12-16 time frame, Maxar also predicted “prevalent” above-normal temperatures over the eastern half of the Lower 48 states.

“Belows, meanwhile, are focused across the West, particularly from the northern Rockies entering into the northern Plains late with high pressure beginning to intrude in,” the forecaster said.

Looking at historical price trends, analysts at EBW Analytics Group observed that for each of the past five years, prices have moved at least 10% between year-end and mid-January.

“In January 2018 and 2019, gas skyrocketed over 20% before receding,” the EBW analysts said. “Should weather forecasts turn colder and spur short-covering, a similar outcome may be in store this year.”

Still, for four of the past five years, the front-month contract fell by the end of January, according to the firm.

“On average, prices posted a 5% increase by mid-January before stumbling to a net 5% decline by the end of the month,” the EBW analysts said. “In 2020, even if prices do briefly surge higher, an oversupplied seasonal outlook appears likely to reverse any short-term gains for natural gas.”

Traders will also have late-arriving inventory data from the Energy Information Administration (EIA) to consider as the week draws to a close. This week’s EIA storage report, pushed back to Friday because of the New Year’s holiday, follows on the heels of two straight bullish surprises from the agency.

Last week’s reported 161 Bcf pull came in nearly 15 Bcf to the bullish side of surveys, while the 107 Bcf withdrawal reported the week before that was also much larger than expected.

Last year, EIA recorded a 24 Bcf withdrawal for the similar week, and the five-year average is a withdrawal of 89 Bcf.

Despite expectations for a stormy pattern to move in over the West Coast heading into the weekend, discounts prevailed at hubs throughout the Rockies and California Thursday.

The National Weather Service (NWS) on Thursday was calling for heavy rain along coastal areas of Washington and Oregon, with heavy snow expected for the Olympics and Cascades.

“By Friday night, a strong cold front approaches the region with a powerful surface low crossing British Columbia,” the NWS said. “The result will be strong winds and high surf for the coastal areas, and additional heavy precipitation can be expected for the Pacific Northwest and northern Rockies as the front moves inland Saturday morning.”

Still, even with the precipitation expected, temperature forecasts showed unseasonably warm conditions for West Coast population centers over the next several days. Maxar was expecting temperatures in Seattle on Friday to average in the 50s, 11 degrees warmer than normal.

Elsewhere, exceptionally warm temperatures were expected throughout the eastern two-thirds of the country for Friday into the weekend, and prices at numerous hubs accordingly ground lower.

Maxar’s forecast for Chicago showed temperatures averaging in the mid-30s Friday, about 11 degrees above normal. Along the Interstate 95 corridor, major cities including Boston and New York City were expected to warm into the mid-40s on average, around 12-15 degrees above normal.

An outage on Texas Eastern Transmission’s (aka Tetco) Line 12 between Delmont and Perulack in Pennsylvania in its M-3 zone has effectively ended, Genscape analyst Josh Garcia said in a note to clients Thursday. This should relieve bullish pressure on prices in M-3, the analyst said.

“The main issues affecting Line 12 were resolved on Saturday (Dec. 28), but full capacity was not restored until Wednesday (Jan. 1), when the additional preventative outage on the Entriken compressor was lifted,” Garcia said. “…As of now, the only remaining outage on the Penn-Jersey Line is between Bechtelsville and Lambertville, cutting 140 MMcf/d of operational capacity, with updates expected mid to late next week.”