Forecasters say intense polar vortex-influenced cold is on the way, but a restless natural gas futures market appeared unsatisfied with the upcoming pattern Wednesday, selling off for a second straight session after a sharp rally to start the week. 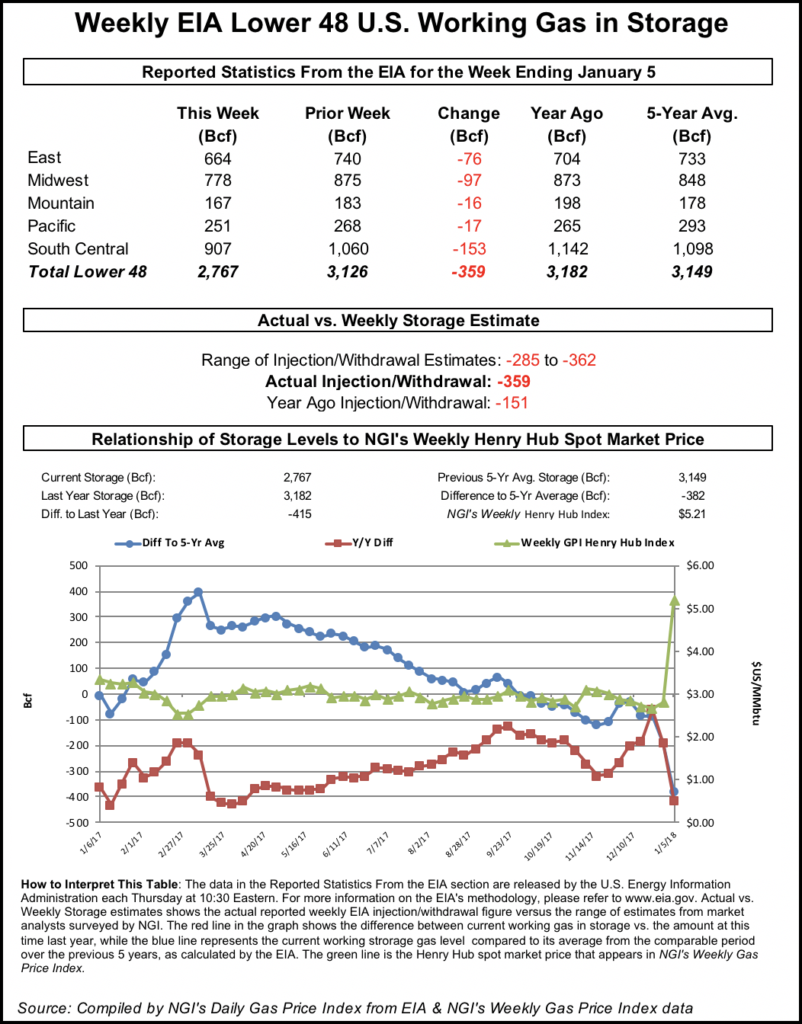 Physical markets continued to strengthen with temperatures set to drop over the weekend and a major snowstorm on track to hit the Midwest and Northeast; the NGI Spot Gas National Avg. climbed 36.5 cents to $4.095/MMBtu.

The February Nymex futures contract dropped 11.7 cents to settle at $3.384, capping off an up-then-down session. The front month climbed as high as $3.696 shortly after 9 a.m. ET before grinding lower throughout the day. The selling Wednesday was largely confined to the winter strip. March settled at $3.147, down 10.2 cents, while April gave up 1.3 cents to settle at $2.833.

With a breakup in the polar vortex poised to funnel intense Arctic cold into the Lower 48 starting this weekend, the weather picture remains bullish overall, Powerhouse President Elaine Levin told NGI. Levin pointed to expectations for a bearish inventory report from Energy Information Administration (EIA) Thursday as possibly behind the selling during Wednesday’s session.

“Everybody’s looking for a pretty disappointing” withdrawal figure from EIA, Levin said. “I think that may have caused some profit-taking after this big pop that we had.”

An 80s Bcf withdrawal for Thursday’s report — covering the week ended Jan. 11 — would be bearish by historical standards. Last year, EIA recorded a 208 Bcf withdrawal for the period, and the five-year average is a pull of 218 Bcf.

The polar vortex, a notorious swirl of winds around a low pressure area in the upper atmosphere over the Arctic, split a few weeks ago, according to forecaster DTN. “This was pretty extreme,” said certified consulting meteorologist Jeff Johnson during a webinar Wednesday.

A polar vortex tends to be associated with some of the coldest air during the winter, and current indications are that the recent split will be of long duration, lasting six to eight weeks before it’s resolved, Johnson said.

NatGasWeather viewed the midday data from the American model Wednesday as “little changed to a touch less extreme with cold. No major changes overall with a series of frigid polar blasts advancing into the U.S. beginning this weekend and lasting through the end of the month, but still with brief milder breaks, such as around Jan. 23-24.”

As forecast maps have turned intensely blue for the two-week outlook period, the timing of the upcoming below-normal temperatures is particularly bullish for natural gas demand given that norms are already cold for this stretch of the heating season, Powerhouse’s Levin said.

Looking at the charts, despite selling off, the market as of Wednesday continued to hold firmly above the support level established at $3.281 when the front month gapped up over the weekend, she noted.

In the spot market, prices continued to strengthen across most regions Wednesday ahead of a shift to frigid temperatures expected over the weekend. Major markets in the Midwest and East also lay in the path of a storm system likely to bring significant wintry precipitation Friday to Sunday, roughly one week after an earlier winter storm dropped snow from the Rockies to the Mid-Atlantic, according to forecasters.

“Unsettled weather may bring a possible winter storm tracking from the Midwest to the Northeast Friday through Sunday,” the National Weather Service (NWS) said Wednesday. “In the storm’s wake, bitter cold temperatures will overtake a large part of the central and eastern U.S. In fact, the northern Plains will have high temperatures staying below zero on Friday — which is nearly 25 degrees below normal.

“Freezing rain, heavy snow, along with heavy rain, is expected along its path through the central and eastern U.S. over the weekend,” the NWS said. “Heavy snow will begin by Friday evening in the central Plains and progress eastward by the weekend.”

The Weather Channel dubbed the latest system Winter Storm Harper and predicted a “widespread swath of significant snow,” though the forecaster cautioned that it was too early Wednesday to predict how much would fall and where due to uncertainties over the storm’s exact track through the central and eastern United States.

In the Northeast, a number of New England points displayed characteristic winter volatility as the region copes with supply bottlenecks. Tenn Zone 6 200L jumped $3.605 to average $10.970 Wednesday, while Iroquois Zone 2 surged $1.715 to $7.040.

Genscape Inc. was calling for demand in New England to reach 4 Bcf Thursday before gradually pulling back to 3.7 Bcf/d over the weekend. That’s compared to an average 3.36 Bcf/d demand for the region over the prior 30 days, according to the analytics firm.

Algonquin Gas Transmission (AGT) notified shippers Wednesday that it had resolved an unplanned outage at its Burrillville compressor in Rhode Island. The outage, which AGT revealed in a notice Tuesday, represented a cut of 171 MMcf/d versus the 30-day average and as much as 428 MMcf/d compared to the 30-day max, according to Genscape.

“Since coming online, AGT has been getting more gas from Millennium, which is displacing” gas from Texas Eastern Transmission (aka Tetco), according to the analysts. “Tetco usually supplies AGT in the winter, but due to weak demand over the holidays, and now due to increased supply from Millennium, AGT has regularly netted deliveries to Tetco since mid-December, something not usually seen until summer.

“While AGT’s mainline capacity remains the same, and is therefore still susceptible to blowouts when demand peaks, this lowers the floor for AGT prices as Millennium gas is cheaper than Tetco M-3, and AGT has greater supply flexibility.”

Meanwhile, prices generally gained across the Rockies and California coinciding with forecasts calling for wintry precipitation to move in over the West Coast. Malin climbed 18.5 cents to $4.445, while farther south SoCal Citygate moderated slightly to average a still-elevated $5.365.

“As a large system approaches California and moves inland, a major winter storm will develop, especially across the Sierra Nevada,” the NWS said. “Blizzard conditions will be possible,” especially at higher elevations. “Blizzard warnings have been issued and will be in effect through Thursday afternoon — with winter storm warnings for areas above 5,500 feet being in effect through Friday morning. In addition to the heavy snow, heavy rain will also impact along the coast of California.”

Aliso Canyon has been under strict regulatory scrutiny ever since a high-profile leak at the facility in 2015.

“Without withdrawals from Aliso Canyon, the increased demand on the system may result in further curtailments to noncore customers,” the utility said.

SoCalGas issued a voluntary curtailment order for electric generators earlier this week due to the higher demand on its system.

“SoCalGas’ system-wide demand has averaged over 3.0 Bcf/d in the past week, compared to a winter-to-date average of about 2.6 Bcf/d; Monday and Tuesday’s values were both around 3.5 Bcf/d, with early volumes for Wednesday just below that,” Genscape analyst Joe Bernardi said.

Maintenance planned to start Thursday and continue until Monday could cut more than 200 MMcf/d of flows leaving the Permian Basin on Northern Natural Gas (NNG), according to Bernardi.

“Maintenance near NNG’s Plains compressor will require an operational capacity reduction for two Permian locations that have averaged a combined 213 MMcf/d of deliveries over the past month,” Bernardi said, adding that deliveries to El Paso Natural Gas have accounted for 140 MMcf/d of that average.

Meanwhile, a force majeure starting Wednesday on Natural Gas Pipeline Co. of America (NGPL) was expected to cut roughly 156 MMcf/d of northbound flows through a compressor station located in Ford County, KS, on the Amarillo Mainline to Chicago, according to Genscape analyst Matt McDowell.

“NGPL is reducing capacity through the compressor due to mechanical issues and is anticipating a return to full service” by Sunday’s gas day (Jan. 20), McDowell said.