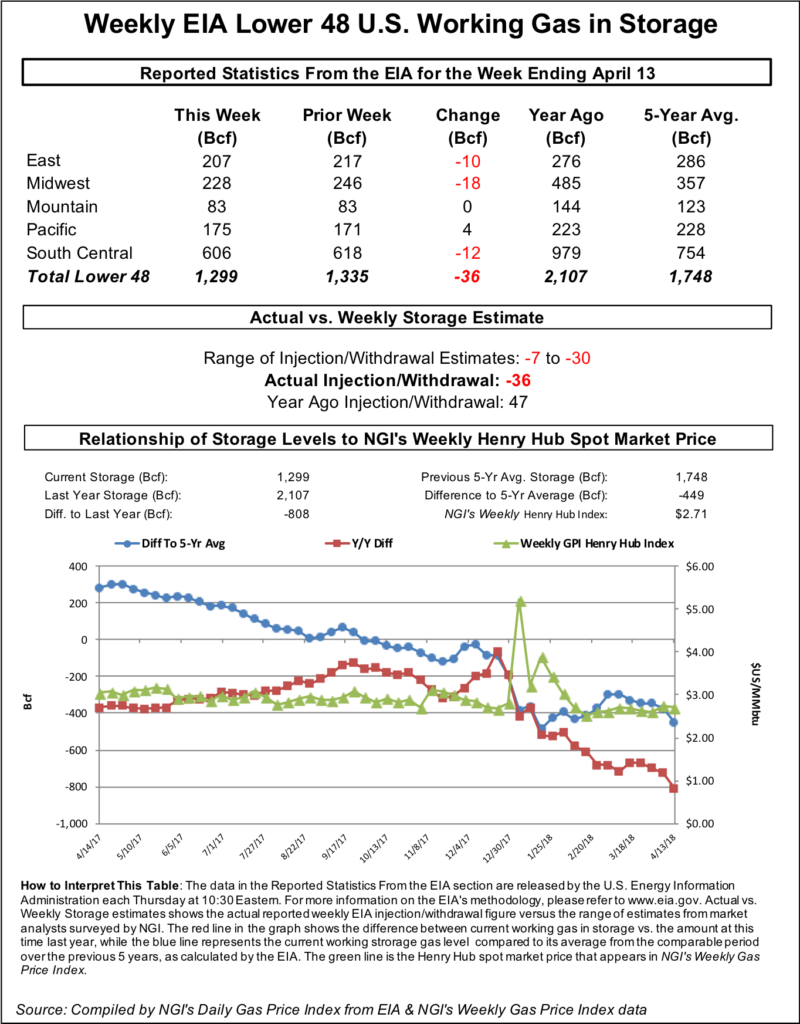 The May contract settled at $2.660 Thursday, down 7.9 cents on the day despite a brief pop to around $2.730 following the release of the Energy Information Administration’s (EIA) weekly natural gas storage report.

The EIA data missed firmly to the bullish side of estimates, briefly allowing futures to claw their way back following a morning sell-off.

EIA reported a 36 Bcf withdrawal from Lower 48 gas stocks for the week ending April 13, an unusual pull from inventories during injection season thanks to uncharacteristically cold weather during the period. Last year, 47 Bcf was injected, and the five-year average is a build of 38 Bcf.

Immediately after the number reached trading desks at 10:30 a.m. ET, the May contract added close to 3 cents, gaining back a chunk of what it lost after selling off to as low as $2.676 earlier in the session. By 11 a.m. ET, May was trading around $2.730, down about a penny from Wednesday’s settle.

OPIS By IHS Markit had called for EIA to report a 24 Bcf withdrawal for the period. IAF Advisors analyst Kyle Cooper had predicted a 27 Bcf withdrawal, while Intercontinental Exchange EIA storage futures settled Wednesday at a withdrawal of 26 Bcf. Bespoke Weather Services had called for a 23 Bcf pull and viewed the actual figure as “quite bullish.”

“This is the second consecutive bullish miss to our estimate, though this one was quite larger,” Bespoke said. “Shoulder season data is notoriously noisy, but this data does confirm that in the short-term the natural gas market is not quite as loose as some other data may have indicated.”

By region, the Midwest saw the largest net withdrawal for the week at 18 Bcf, while 10 Bcf was pulled in the East. The Mountain region finished flat week/week, while 4 Bcf was injected in the Pacific. The South Central saw 12 Bcf pulled from storage for the week, including 11 Bcf from salt and 1 Bcf from nonsalt.

“Some natural gas storage operators have reported net withdrawals from base gas, beginning with the week ending April 6,” EIA noted in this week’s report. “The cumulative net withdrawals of base gas were treated as negative working gas stocks and are reflected in the working gas inventories. As a result, a small portion of this week’s reported net change includes flows from base gas.”

“The number was bullish” and speculators “bought it, and the market rallied, but there was no follow-through to the upside,” Saal said. Those who bought following the report did so “expecting more buying to come in behind them…and when that didn’t happen then these people who bought it had to sell.”

Bespoke said the market also appeared to be pricing in news of a reported delay of the proposed liquefied natural gas (LNG) export projet on the Texas Gulf Coast, Freeport LNG.

According to news reports, Freeport LNG’s first three trains will be delayed by about nine months, with start-up for the first train now pushed back to September 2019.

“The result will be a chunk of demand not arriving for the first two thirds of 2019 even as production swells,” Bespoke said, pointing to selling Thursday further along the strip into 2019. “Those contracts broke lower on the day and barely flinched after a bullish EIA print, eventually dragging the rest of the strip lower as the prompt contract settled near the low of the day.”

The firm said it expects “a relatively range-bound day” on Friday, with some downside risk putting a test of $2.62 in play.

Turning to the spot market, Henry Hub mirrored the drop in the futures Thursday, shedding 7 cents to average $2.77, while declines of a dime a more were common across most regions.

In its one- to seven-day outlook Thursday NatGasWeather.com called for continued chilly temperatures “across the northern U.S., aided by a new weather system with rain and snow tracking out of the Midwest and across the Ohio Valley and Northeast into Friday. This will continue stronger than normal demand for heating as lows with this system again drop into the 20s and 30s.

“Temperatures will warm across the southern U.S. into the 70s and 80s through the weekend, although cooling slightly early next week as a weather system brings showers,” the firm said. “Next week will bring a mix of mild and cool periods as weather systems track across the country every few days with showers for near seasonal national demand.”

In the Midwest, Genscape Inc. was forecasting demand to fall to just above 11 Bcf/d over the weekend, down from a recent seven-day average of 15.7 Bcf/d.

Chicago Citygate gave up 45 cents Thursday to average $2.71 after averaging as high as $3.73 in trading Tuesday.

Points in the Northeast retreated after weather-related gains the day before. The constrained Algonquin Citygate dropped a hefty $3.46 to average $4.88, while Iroquois Zone 2 tumbled $2.54 to $3.63.

Genscape’s forecast for New England showed demand falling to just over 2 Bcf/d by the weekend after topping 3 Bcf/d on Thursday.

Southern California Gas Co. (SoCalGas) on Wednesday said it was “extending its L3000 maintenance for an additional four and a half months past the previously expected completion date of May 1, which means that import capacity will continue to be notably constrained throughout the summer,” Genscape analyst Joe Bernardi said. “This work is limiting operational capacity at SoCalGas’s two Topock receipt points to zero.

“Before reductions took effect in early 2016 at these points, they had brought on an average of 324 MMcf/d,” Bernardi said. “This maintenance has been extended several times, well beyond the initially estimated reinstatement date of Oct. 31, 2016. The newly announced end date is Sept. 17.”

According to Genscape analyst Rick Margolin, recent signals suggest declines in Mexican domestic natural gas production could be slowing down, impacting the outlook for U.S. exports to Mexico in the longer-term.

Petroleos Mexicanos (Pemex) “reported total gas production in February fell 1.2% from January, and came in about 446 MMcf/d (8.4%) lower versus February 2017,” Margolin said. “Though a decline year/year, the rate was about 150 MMcf/d smaller than what we have been seeing through most of this year” taking into account disproportionate production impacts from hurricanes, tropical storms, earthquakes and accidents during September and October.

“Meanwhile, Mexican rig counts are rebounding,” he said. The recent Baker Hughes Inc. international rig count last month “increased to 21. This is the highest it has been since July 2017 and marks the fourth consecutive month of increases. Though there were zero gas rigs added, more than 81% of Mexican gas production is associated. So the growing rig count (particularly with most of the new rig deployments occurring in gas-rich offshore plays) could be a harbinger of a slowdown in gas production.”