Natural gas futures eased Thursday morning after the Energy Information Administration (EIA) reported a storage injection that was somewhat greater than what traders were expecting. 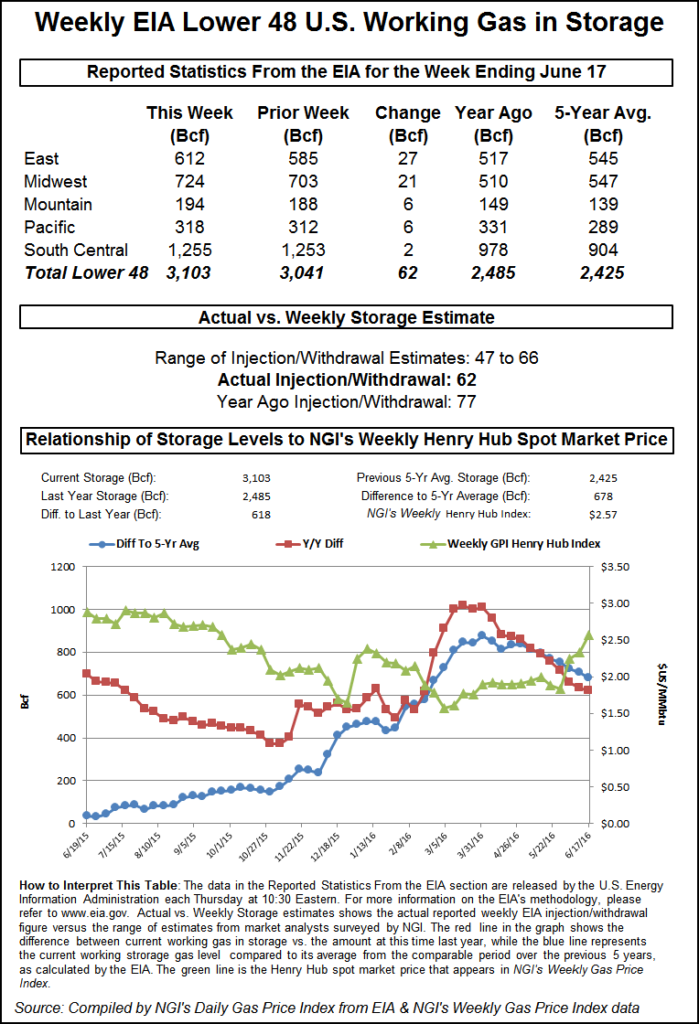 EIA reported a 62 Bcf storage injection in its 10:30 a.m. EDT release for the week ending June 17, about 4 Bcf greater than what traders were anticipating. July futures fell to a low of $2.634 immediately after the figures were released, and by 10:45 a.m. EDT July was trading at $2.653, down 2.4 cents from Wednesday’s settlement.

“We were hearing a build of 58 Bcf, so the number was a little bearish,” said a New York floor trader. “Basically, you are in a range of $2.50 on the downside and $2.75 on the upside and you are kind of in the middle right here.”

“The 62 Bcf build in storage for last week was more than expected, although also still less than the 88 Bcf five-year average, and so fundamentally supportive on a seasonally adjusted basis,” said Tim Evans of Citi Futures Perspective. “With this second consecutive bearish surprise versus expectations, it looks as though the background supply-demand balance has weakened relative to where it had been. However, we continue to see enough air conditioning demand to limit injections to less than the five-year average, and so the report was ”less bullish,’ rather than ”bearish,’”

Inventories now stand at 3,103 Bcf and are 618 Bcf greater than last year and 678 Bcf more than the five-year average. In the East Region 27 Bcf was injected and the Midwest Region saw inventories increase by 21 Bcf. Stocks in the Mountain Region rose 6 Bcf, and the Pacific Region was higher by 6 Bcf. The South Central Region added 2 Bcf.