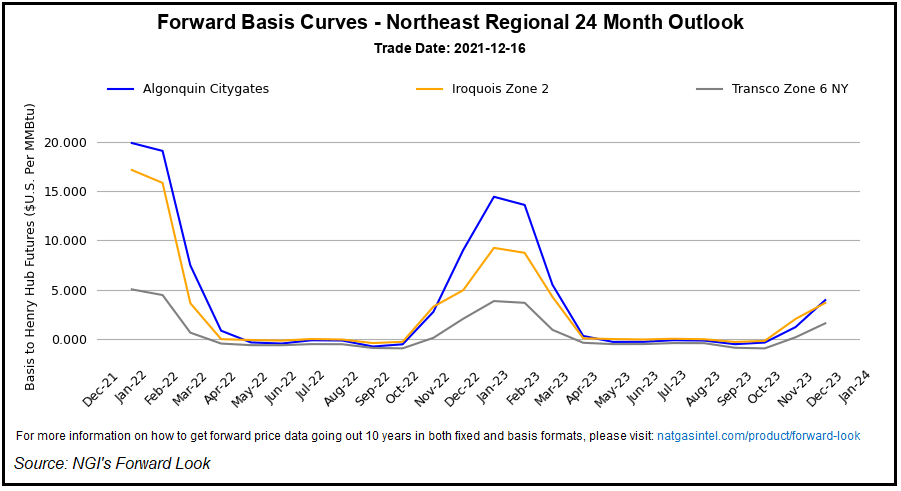 NGI’s Spot Gas National Avg., in contrast, jumped $1.495 to $5.370 on Friday, propelled by soaring prices in the Northeast ahead of an anticipated blast of winter weather.

Aside from a near-term freeze in the Midwest that was expected to push to the East over the weekend, weather outlooks shifted warmer on Friday, forecasters said. Both the domestic and European models shed several heating degree days from Thursday’s projections, NatGasWeather noted, “thereby forecasting a rather bearish pattern the next two weeks.”

There is still potential for frigid air over Canada to descend into the Lower 48 later this month or early next, the firm added. But based on Friday’s outlook, heating demand is expected to prove modest for this time of year through the remainder of 2021.

Bespoke Weather Services also noted customarily light trading volumes ahead of the holidays. The market “is simply too thin, and there are not enough buyers to fight off selling from hedgers…This kind of price action can continue until bidweek, just after Christmas, when physical players will certainly be in the market. If we hold on to any cold risks at all at that point, prices will certainly rally, perhaps strongly.”

In the meantime, the firm added, new domestic catalysts are scarce.

Production held above 96 Bcf/d over the past week – within striking distance of 2021 highs — according to Bloomberg estimates on Friday. Supplies appear ample for the winter.

The U.S. Energy Information Administration (EIA) on Thursday reported an 88 Bcf withdrawal from natural gas storage inventories for the week ended Dec. 10. The result was in line with analysts’ expectations ahead of the print, according to major polls.

The latest withdrawal compared with last year’s 118 Bcf draw and the five-year 114 Bcf average pull, according to EIA. Regions with colder climates drove the increase. The Midwest posted a 37 Bcf withdrawal and the East followed with a 25 Bcf pull.

Total working gas in storage stood at 3,417 Bcf, which was 326 Bcf below year-earlier levels and 64 Bcf below the five-year average, EIA said. However, looking ahead to the next EIA read on inventories, analysts at Tudor, Pickering, Holt & Co. (TPH) estimated a 65 Bcf withdrawal that would leave stockpiles above the five-year average and end a prolonged period in which inventories have lagged the historical norm.

The “key moving pieces” in terms of week/week changes are an estimated 4.5 Bcf/d decline in residential/commercial demand and a 1 Bcf/d drop in power generation demand, according to TPH.

“Power generation has been a solid supporter of balances through November and December, but this past week has been closer to norms as wind has been running hot relative to year-to-date levels and seasonal levels…while nuclear has come back and hydro generation has trended higher, in line with seasonal norms,” the TPH analysts said.

LNG to the Rescue?

U.S. liquefied natural gas (LNG) exports have held strong, albeit with some maintenance-related interruptions this month. Feed gas volumes hovered near or above 12 Bcf over the past week, according to NGI estimates, bolstered by robust demand from Europe.

However, analysts said this amounted to a short-term boost and would not replace the gas Europe had anticipated receiving from Russia via its new Nord Stream 2 (NS2) pipeline. German regulators have delayed approval of deliveries via the pipeline amid geopolitical concerns about Russia and its ongoing strife with Ukraine. NS2 gas is not expected to be delivered this winter, Rystad Energy said.

As a result, European prices and demand for U.S. exports remain elevated as the continent “hangs onto the center stage,” Rystad analyst Emily McClain said.

Operational inconsistency at U.S. export facilities is to blame for LNG feed gas volumes stalling around 12.0 Bcf/d in December, EBW Analytics Group analyst Eli Rubin said. But given the European demand backdrop, “new record highs” around 13 Bcf/d “are likely later this year and into 2022,” he said.

Spot gas prices spiked in the supply-constrained and volatile Northeast on Friday, driving up the national average.

NatGasWeather said national demand was expected to increase to start the next trading week as a winter weather system over the Midwest “taps cold Canadian air and tracks it across the Northeast with highs of 10s to 40s.”

Elsewhere, prices were mixed, with prices falling in the nation’s midsection but climbing in the West.

Looking ahead, NatGasWeather said “comfortable conditions” continue to permeate much of the southern United States, with highs of 50s to 70s.

During the final week of December, Friday forecasts indicated, the southern two-thirds of the Lower 48 will be mild to warm with highs of 50s-70s “as high pressure rules for light demand,” NatGasWeather said.

The West remains a wildcard the remainder of December, the firm added, given the potential for sporadic rains and some snow in elevated areas.

So far this month, temperatures have proven cooler than normal on the West Coast, Wood Mackenzie analyst Quinn Schulz said. She said Sempra’s Southern California Gas Co., over a seven-day period leading up to Friday, had withdrawn nearly 1.1 Bcf of gas from the Aliso Canyon storage facility.