Natural gas futures could not hold onto early gains Thursday after the latest government storage data failed to generate any buzz in the market. Profit-taking managed to push January Nymex gas futures to a $4.335/MMBtu intraday high early in the session, but with a stubbornly mild weather forecast, the contract eventually settled at $4.056, down 20.2 cents. February slipped 19.1 cents to $3.997. 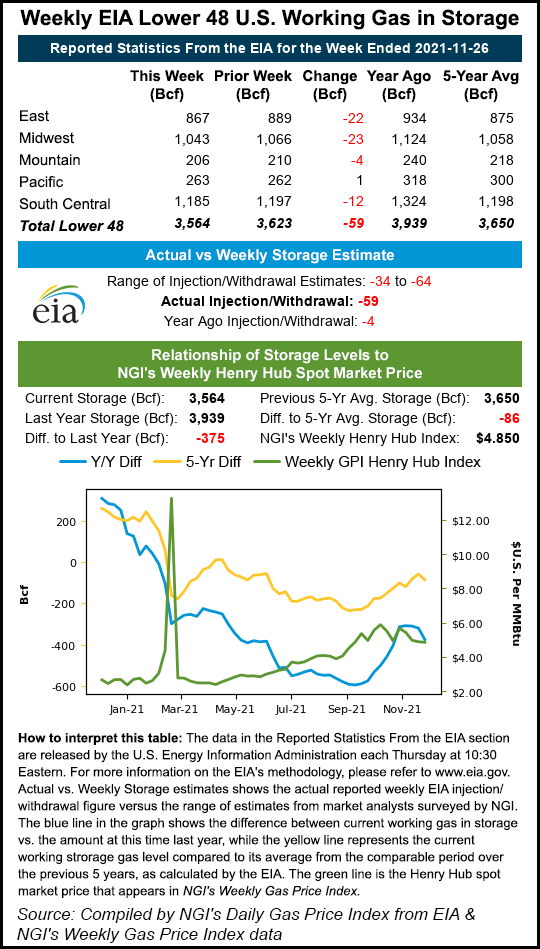 Changes in the long-range weather models have been small in recent days, doing little to alter the current mild pattern over the United States. There are brief bouts of cold in the 15-day outlook, including a chilly weather system expected to arrive in the Midwest late this weekend. However, the crisper air is seen as temporary, with a return to warmth expected within days. Furthermore, comfortable temperatures in the 50s to 70s are forecast for the rest of the country, resulting in little heating demand in the final weeks of 2021.

January futures climbed as much as 7.7 cents early Thursday, but traders hoping to extend those gains were disappointed in the latest government storage data. Price action immediately following the Energy Information Administration (EIA) report was rather muted, and within a half hour, prices had slipped into the red. Once the prompt month crossed $4.20, bears retained full control and the January contract tumbled as low as $4.042.

Mizuho Securities USA LLC’s Robert Yawger, director of Energy Futures, said any speculative length in the market would most likely bail versus the big $4.000 levels. “Incredibly, the natural gas relative strength index is 35.92, implying there is still room to slide before the market reaches oversold territory.”

As for the latest storage data, the Energy Information Administration (EIA) reported a 59 Bcf withdrawal from natural gas storage inventories for the week ending Nov. 26, which included the Thanksgiving holiday. The draw was nearly dead on with estimates ahead of the EIA report, and traders barely flinched on the news.

Ahead of the report, major surveys had coalesced around a withdrawal in the high 50s Bcf. The median projection in Bloomberg and Reuters polls was a 58 Bcf pull. NGI also modeled a 58 Bcf draw.

The 59 Bcf withdrawal compared with a minor 4 Bcf withdrawal in the year-earlier period and the 31 Bcf five-year average draw. It also surpassed the EIA’s 21 Bcf pull in the prior week’s report.

Nevertheless, Bespoke Weather Services said the latest draw “is a very neutral number, doing nothing to alter the picture.” The figure reflects balances being a little tighter than the five-year average, according to the firm. Its model is pointing to an end-of-season storage level around 1,550 Bcf.

Bespoke cautioned that the end-March estimate is subject to moving higher if the warmer pattern forecast through at least mid-December persists even longer, “which seems likely, at least for awhile.” The forecaster said this month is seen rivaling December 2006 as the “second warmest December on record in terms of total gas-weighted degree days. December 2015 is No. 1 and probably unreachable.”

Given the “blowtorch” weather outlook and improved supplies, EBW Analytics Group said the market may begin to build a modest storage surplus versus the five-year average by mid- to late December. This is further evidence that prices at seven-year highs are no longer prudent as a means of conserving natural gas.

“The market is no longer in a shortage situation,” EBW senior analyst Eli Rubin said. “While weather forecasts and the storage outlook can change rapidly — as the past two weeks aptly demonstrate — an ample storage cushion may further cut into winter storage risks and is likely to drive the February contract towards $4.00/MMBtu by the end of the year.”

Rubin, however, warned that winter has only begun, and the path lower for prices may be interspersed with brief pushes to the upside. He said extreme weather is not as rare as it seems. “Out of the past seven winters, the market has seen the 2014 Polar Vortex, 2018 Bomb Cyclone and 2021 Winter Storm Uri that all led to notable upward pressure for Nymex pricing. None were fully foreseen in early December.”

Gelber & Associates Corp. analyst Dan Myers noted how quickly the March-April spread has narrowed in recent weeks. After peaking at more than $1.80 in early October, the spread has dwindled to only 17 cents.

“This is something we’ve largely expected as winter (at least early) fails to live up to the dire scenarios priced in earlier this fall,” he said.

Mild weather is the leading factor that has allowed prices to back off, according to Myers. The market is still on hold to see when withdrawals may accelerate more earnestly. “Even the colder-than-normal week last week was dampened somewhat by the Thanksgiving holiday,” he said.

Aside from the weather, Myers said there are some other fundamental shifts going into winter. The recent production revival has pushed output toward 94-95 Bcf/d, a level that is somewhat common this time of year.

“For now, operators look to exhaust their remaining yearly capital budget and turn to drilled but uncompleted wells to bring production on quickly before winter,” he said. “To some extent, I think the current rise is seasonal and won’t be sustainable. But higher levels are a risk for next year, we’ve upped our expectation for the back half of 2022 and do think storage will recover considerably.”

The 10-day forecast for the New York City area does not have one day with a low temperature below freezing, said Mizuho’s Yawger. The “March/April spread is poised to switch to contango before winter even begins.”

Leave it to the often volatile Northeast markets to post Thursday’s only spot gas gains across the Lower 48. Still, with cool air lingering across New England, several key locations in the region posted gains of a few dollars.

Milder conditions across the rest of the country continued to limit demand, pressuring all other U.S. markets further for Friday’s gas delivery.