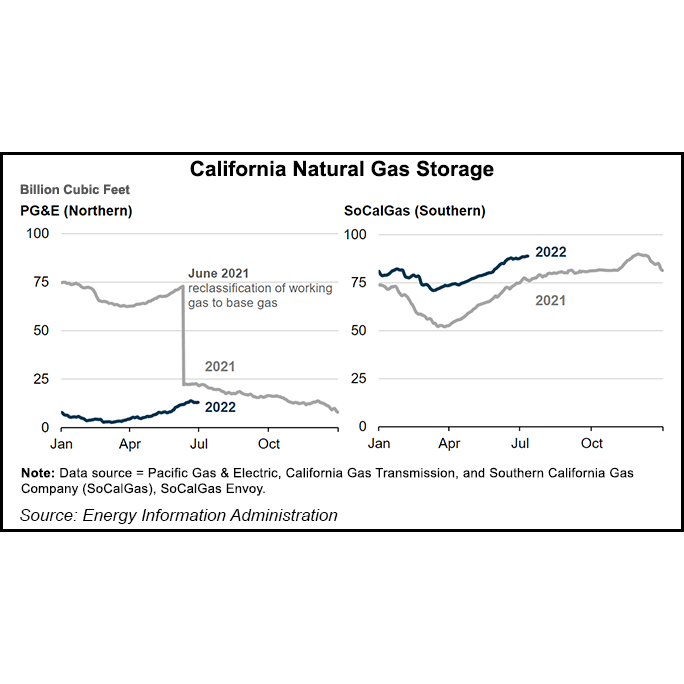 Futures action was fast and furious Monday, with September prices down sharply out of the gate as weather forecasts cooled a bit for the first half of this month. The prompt month plunged to a $7.753 intraday low before recovering midday.

Bespoke Weather Services said near-record heat is still expected this week, with every day in the 15-day outlook forecast to be hotter than normal. But, models have tended to overshoot the level of projected heat throughout the summer, and heading into the middle of August, some cooler trends are likely to emerge.

Nevertheless, the midday Global Forecast System model gained back four of the nine cooling degree days (CDD) it lost over the weekend. Overall, it remained “impressively hot and bullish” most of the next 15 days, while remaining more than 15 CDDs hotter than the European model.

Meanwhile, production continues to tease new highs. NatGasWeather pointed out that output hit 97 Bcf late last week and held at that level through the weekend. However, with the start of the new month, early data on Monday reflected a 1.5 Bcf day/day decline in production. Revisions are likely, though.

With the recent heat and the near-term outlook reflecting more of the same, U.S. storage deficits are set to swell in the coming weeks, according to the firm. It sees overall stocks, currently 345 Bcf below the five-year average, slipping to slightly more than 360 Bcf behind those levels.

On the bright side, NatGasWeather noted deficits may have ballooned to near 450 Bcf if not for the outage at the Freeport LNG terminal.

Analysts at The Schork Group also weighed in on the storage situation. In a note to clients on Monday, they said that the market is a little more than halfway through the injection season and has refilled only 46% of the gas that was withdrawn last winter.

The Schork analysts said after tanking in early June on the news of the Freeport fire and subsequent outage, the backwardation at the front of the Nymex curve has exploded. Despite initial projections that the loss of liquefied natural gas demand from Freeport would free up more molecules to be injected into storage, stifling hot weather has sent the premium on the front three months (weighted for volume) to the subsequent 12-month strip to $2.189. This is the strongest backwardation since hurricanes Katrina and Rita tore apart the shallow-water Gulf of Mexico producing area in 2005, according to the Schork team.

“This is the clearest possible telltale of the market’s agita regarding the adequacy of the summer’s refill pace,” the analysts said.

While the South Central region has garnered the most headlines for its insufficient inventories, the Energy Information Administration (EIA) pointed out that stocks also are precariously light in parts of California.

Natural gas deliveries from the Desert Southwest into Southern California, meanwhile, declined by 3%, based on data from PointLogic. Fleury noted, however, that the California Public Utility Commission voted in November 2021 to increase the working gas capacity at the Aliso Canyon natural gas storage facility to 41.0 Bcf from 34.0 Bcf to help ensure energy reliability in the region.

“As a result, SoCalGas is able to store more locally produced natural gas, and inventories have increased to 17% above last year,” Fleury said.

Overall, supply generally remains subdued, according to EBW Analytics Group. The firm said storage levels are dropping, with end-of-October projections falling to 3,365 Bcf. Typically, 3,700 Bcf is seen as adequate when it comes to pre-winter stock levels.

“In a market with a price-inelastic demand curve and thin liquidity, significant gains are possible this fall as the market shifts its focus to an uncomfortably low winter storage trajectory and re-prices Nymex risk premiums higher,” EBW senior analyst Eli Rubin said.

With a series of wet weather systems making their way across the eastern United States and dampening demand, spot gas prices softened for Tuesday’s gas delivery.

The National Weather Service said showers and thunderstorms would impact portions of the Midwest and East as a weak upper trough swings through the region. Some thunderstorms could turn severe over parts of the Ohio Valley, while heavy rainfall may focus over parts of the Central/Southern Appalachians because of a weak upper-disturbance that moves through the Tennessee Valley.

Similar losses spread across the Lower 48 outside of some pockets in the Northeast.

Another exception was in the Pacific Northwest, where upstream pipeline maintenance was expected to reduce downstream flows for the next month or so.

Wood Mackenzie said up to 293 MMcf/d of flows through Westcoast Transmission’s Huntingdon Delivery Area could be cut beginning Tuesday (Aug. 2) until Sept. 9. The maintenance being performed is a class upgrade of the KP 20 and 25 facilities between Station 9 and Huntingdon.

Since there are other delivery points serving Vancouver demand before exporting through Sumas, actual cuts to Sumas receipts are likely to be less than total cuts through the constraint, she added.