Unlike the prior two weeks, the Energy Information Administration (EIA) in underwhelming fashion reported an on-target 98 Bcf injection in natural gas storage inventories for the week ending May 28. 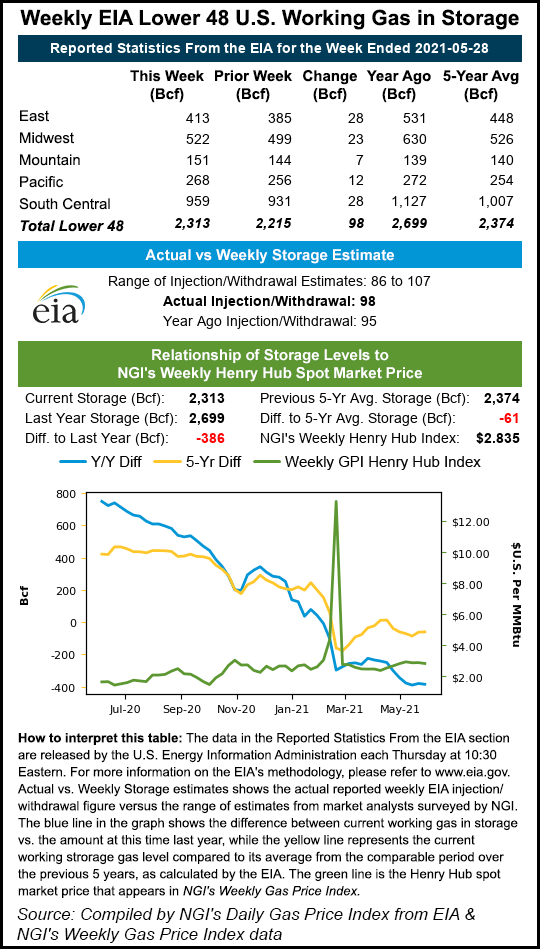 Despite the lack of surprises in the EIA data, Nymex futures prices strengthened on the figure, as traders appeared to breathe a sigh of relief that the injection wasn’t larger. The previous two EIA figures, including last week’s 115 Bcf build, came in much higher than estimates.

“I think market worry was on another outsized injection beyond consensus, 100-plus,” said a participant on The Desk’s online chat Enelyst.

Ahead of the EIA report, estimates from major surveys had coalesced around a build in the mid-90s Bcf.

Reuters polled 17 analysts, whose estimates ranged from a build of 86 Bcf to 107 Bcf, with a median of 95 Bcf. A Bloomberg survey of 11 analysts had a tighter range of projections and landed at a median of 94 Bcf. The average estimate of a Wall Street Journal poll also was 94 Bcf. NGI modeled a 95 Bcf injection.

Broken down by region, the South Central reported a 28 Bcf increase in inventories, including a 24 Bcf build in nonsalt facilities and a 4 Bcf build in salts, according to EIA. East stocks also rose by 28 Bcf, while the Midwest rose by 23 Bcf. Pacific inventories added 12 Bcf, and the Mountain region added 7 Bcf.

NatGasWeather, which nailed the 98 Bcf, said it was “cooler than normal over the West and far southern U.S., while warmer than normal across the Midwest, Northeast and Mid-Atlantic” during the EIA reference period.

Mobius Risk Group said the EIA report could be viewed as “somewhat insignificant” considering it failed to produce another surprise one way or the other. EBW Analytics Group similarly noted that it would likely take a build of more than 100 Bcf to trigger a sell-off.

That said, Bespoke Weather Services noted that based on its modeling, the EIA figure was in line with supply/demand balances from the last couple of reports. This could mean that the loosening trend has held, taking the firm’s end-of-season projection (which includes a hot summer) up more than 3,700 Bcf.

“Market reaction was initially to rally, but we still feel a drift back toward $3.00 is more likely over the next few sessions,” Bespoke said.

The downside risk is heightened as weather models early Thursday for the next couple of weeks continued to ease the amount of projected demand in the Lower 48. It does not bring about a “cool” pattern by any means, according to Bespoke, but takes overall demand closer to normal after next week.