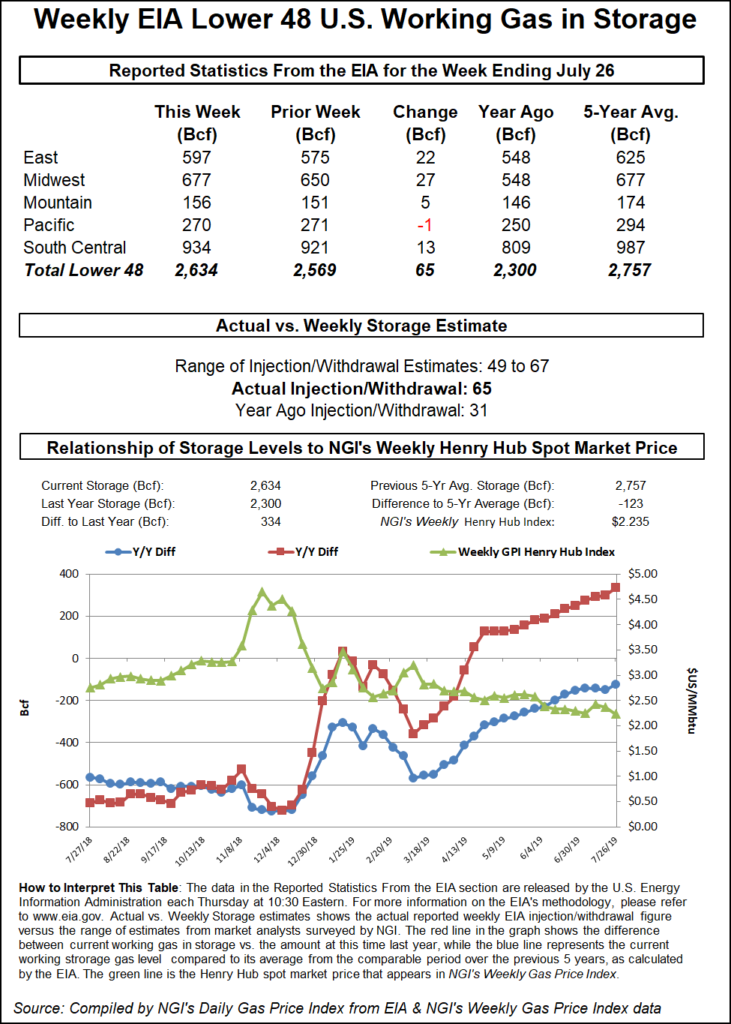 In the spot market, the Tetco incident appeared to shift the dynamics between Gulf Coast and Appalachian prices; the NGI Spot Gas National Avg. gained 3.0 cents to $2.030/MMBtu.

The Tetco explosion, which killed one person, grabbed the market’s attention early Thursday as it raised the prospect of restricted supply flowing southbound into the Gulf Coast region.

As images of the blaze were spreading over social media, Tetco declared a force majeure because of an “unplanned outage” on its 30-inch diameter line south of the Danville Kentucky Compressor Station. It notified shippers that north-to-south capacity through the area would be cut to zero. The pipeline said “efforts to restore this line to full capacity are underway” but did not provide any estimates on how long repairs will take.

The news of the explosion appeared to have a bullish effect on futures prices, at least initially, sending the September contract as high as $2.333 just before 8:30 a.m. ET. But it didn’t take long for the market to hit reverse after the Energy Information Administration (EIA) reported a larger-than-expected 65 Bcf weekly injection into U.S. natural gas stocks a couple hours later.

The 65 Bcf build, reflecting injections during the week ended July 26, compares to a 31 Bcf injection recorded in the year-ago period and a five-year average of 37 Bcf.

As the figure crossed trading screens at 10:30 a.m. ET, the front month quickly shed over a nickel, dipping down to around $2.240-2.250 over the next 10 minutes. From there, prices worked steadily lower into the settle.

Prior to Thursday’s report, estimates had been pointing to a build in the mid to upper 50s Bcf. A Bloomberg survey showed a median 59 Bcf build, while a Reuters survey pointed to a 57 Bcf injection. Intercontinental Exchange EIA Financial Weekly Index futures settled Wednesday at 60 Bcf. NGI’s model predicted a 58 Bcf injection.

By region, the Midwest injected 27 Bcf week/week, while the East injected 22 Bcf. Further west, the Mountain region refilled 5 Bcf, while the Pacific recorded a 1 Bcf withdrawal. In the South Central, a 16 Bcf weekly injection into nonsalt stocks was partially offset by a 3 Bcf withdrawal from salt, EIA data show.

Thursday was “quite the volatile day in the world of natural gas, with a strong early morning rally” on the Tetco incident proving “short-lived…as the market got hit by yet another very bearish EIA report,” Bespoke Weather Services said. “We believe the record cool temperatures seen in the South last week were the culprit in the miss, as extreme temperatures in either direction can be more difficult to properly model.

“…We simply must see tighter balances to sustain a rally, even with some modest heat in the weather pattern. We do feel next week’s number can be tighter, but with production hitting new highs, it remains to be seen if it is enough.”

News of the Tetco explosion may have roiled the market’s supply outlook in the near-term, but recent data suggest production remains on an upward trajectory.

Thursday’s estimate, potentially impacted by noise associated with first-of-the-month nominations, was back below 90 Bcf/d.

“Comparing the most recent seven days of production to June averages, we see the largest growth has been taking place in Texas (up 0.86 Bcf/d), the East (up 0.78 Bcf/d), the Permian (up 0.27 Bcf/d), Gulf Coast (up 0.18 Bcf/d) and Bakken (up 0.12 Bcf/d),” Margolin said. “The only region to post notable declines recently compared to June has been the Rockies (excluding the Bakken), where production is averaging about 0.34 Bcf/d lower than June. The bulk of these declines are posting in the Denver-Julesburg.”

Genscape is forecasting production to continue to grow “well into next year.”

“We expect recent rates of growth to continue unabated through October, then slowing slightly headed into 4Q2019,” Margolin said.

With the Tetco explosion keeping supplies from flowing north-to-south through Kentucky, Gulf Coast spot prices rallied Thursday, including at Henry Hub, which surged 12.0 cents to $2.350.

In an afternoon update on its electronic bulletin board, Tetco said it “has three lines between its Danville and Tompkinsville compressor stations that make up its 30-inch pipeline system in this area. These lines are: Line 10, Line 15 and Line 25. The incident occurred on Line 15.”

The operator confirmed that capacity through the Danville station would remain at zero through Friday’s gas day.

The next few days should bring moderate overall national demand, according to NatGasWeather.

“The Midwest and Northeast will be comfortable with highs of only 70s and 80s through the weekend in the wake of a recent cool shot,” the forecaster said. “Regionally strong demand will continue over Texas and the West with highs of 90s and 100s, but not impressive enough to make up for more comfortable conditions over other regions.”