After some modest strength early Wednesday, natural gas futures ended the day lower as traders shrugged off building heat in long-range weather forecasts. After hitting a high of $2.145/MMBtu, the September Nymex gas contract went on to settle 2.8 cents lower at $2.083. October slipped 2.5 cents to $2.099. 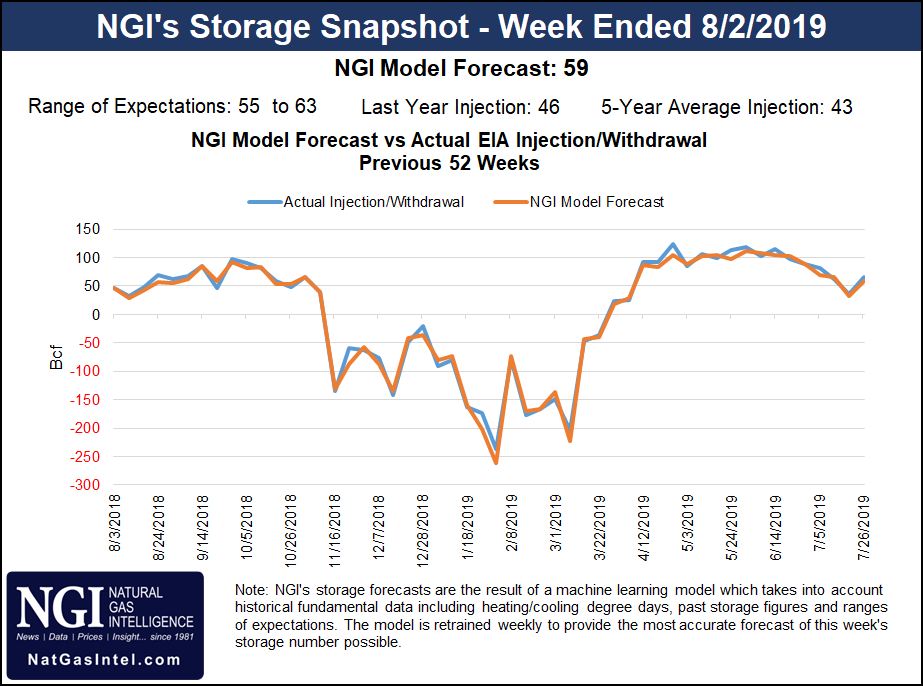 Spot gas prices also mostly declined as cooler weather was expected to move into the Northwest, while a new cool weather system was forecast to sweep across the Midwest and Northeast in the next day or two. Led by steep losses in the Northeast, the NGI Spot Gas National Avg. fell 2.5 cents to $1.93.

Despite the increasingly balmy outlook for the latter part of August, another hefty storage injection likely on tap for Thursday was too much to bear for the market. A week after the Energy Information Administration (EIA) reported a build that beat consensus by more than 5 Bcf and came in more than 30 Bcf above last year’s injection, the EIA was expected to deliver more unsupportive data on Thursday.

Estimates pointed to an injection in the high 50s Bcf range. A Bloomberg survey of 10 analysts ranged from a 55 Bcf to 63 Bcf build with a median of 59 Bcf. NGI also projected a 59 Bcf injection. By comparison, the EIA reported a 46 Bcf injection last year and the five-year average stands at 43 Bcf.

Looking ahead, the upcoming bout of heat should temper the storage injection for the EIA report on Aug. 29, but not until after a string of above-average injections and only if heat proves to last more than a few days across the East during the last 10 days of August, according to NatGasWeather.

“Essentially, the back end of the 15-day forecast is likely to be considered hot enough to satisfy, but not the front 10 days,” NatGasWeather said.

The lack of significant heat in the near term may not matter much when it comes to power burns. On Tuesday, burns were revised to a new record high, which is “pretty impressive” given gas-weighted degree days (GWDD) are not nearly on the same level as those seen during the peak heat of July, according to Bespoke Weather Services.

“Some of this strength is due to the lower wind we’ve had so far this week along with higher nuclear outages, but the lower prices may finally be doing some work as well,” Bespoke chief meteorologist Brian Lovern said.

This would normally be quite bullish at these levels, but Bespoke remains concerned about choppiness for a couple of reasons. One is that it is unclear if burns hold this strength as wind is set to increase the rest of the week and nuclear outages may lower again. The second is that production continues to set new highs and liquefied natural gas (LNG) intake is lower, the latter of which is expected to last another couple of weeks.

“This promotes larger builds over the next couple of EIA weeks, and we do not see Thursday’s number as particularly impressive either. So, while we see upside potential toward autumn, the nearer term may continue to see more back-and-forth price action,” Lovern said.

EBW Analytics also noted the bearish impact of supply growth and lower LNG feed gas deliveries on natural gas prices. The firm also pointed to rising concerns over a potential recession, with the trifecta of headwinds throwing a major gut punch to prices.

“While periodic efforts to push prices higher are still possible, it is too late in the summer for natural gas to mount a significant rally. Instead, as Tuesday’s trading action shows, whenever prices start to rise, bears are likely to be quick to step in to take advantage of an opportunity to expand short positions, limiting the upside potential for natural gas,” the firm said.

Spot gas prices were mostly lower Wednesday as the bulk of any intense heat in the United States is centered in the southern states, with the hottest weather and high humidity expected in Texas and the Southwest, according to NatGasWeather.

Elsewhere, cooler air was building in the Northwest, and a weather system forecast to sweep across the Midwest to the Northeast during the next few days is expected to keep temperatures comfortable. Highs this weekend are forecast to top out in the 70s to low 80s, according to forecasts.

“A brief break is favored early next week before another glancing blow of cooling is expected across the northern United States mid next week, only to be followed by another break late in the week,” NatGasWeather said.

Despite the mild setup expected in the Northwest, prices at a key hub in the region jumped considerably amid word that imports from Canada would remain restricted for another week due to an ongoing outage at the McMahon gas processing plant in British Columbia (BC).

The McMahon plant had been expected to return to service on Wednesday, but a notice posted Tuesday indicated the new expected date for flows to return is Tuesday, Aug. 13. Receipts onto Westcoast Transmission averaged 387 MMcf/d through most of July, but then dropped to zero on July 30, according to Genscape Inc.

“Since the McMahon outage started, and with other area processing plants posting lower output, BC production has been running about 1.49 Bcf/d lower than the prior 30-day average,” Genscape analysts Rick Margolin and Joseph Bernardi said.

The chunky drop in production has been somewhat supportive of Westcoast Station 2 basis. NGI price data showed that on Wednesday, Westcoast Station 2 traded a little more than $1 below Henry Hub, which is a considerable improvement from the $2.42 discount the day prior to the McMahon outage.

On the U.S. side of the border, prices at Kingsgate jumped 23.5 cents to $1.75 given the flow restrictions. Other points in the region were down a few cents on the day.

Texas also put up gains due to the building heat and humidity in the state. Most gains were capped at less than a nickel, but much stronger increases were seen in West Texas, where Transwestern shot up 22 cents but still averaged a few cents below zero.

Waha also remained below zero as stronger demand in the region proved to be no match for surging production. Cash prices had previously been on relatively stable footing in positive territory for most of July, including a high for the month of $1.25 in mid-July, according to Genscape.

During that time basis tightened to within $1.23 of Henry Hub as regional demand had been strong for power generation and molecules were being injected into the Gulf Coast Express (GCX) system for linepacking, Margolin said. “However, production has been notching higher in recent days, demand softening, and GCX appears to be taking less gas.”

Meanwhile, Genscape had previously noted that declines in receipts on regional interstate pipelines coincided with the beginning of linefill on GCX. “Those receipts have been edging higher in recent days, suggesting GCX is not taking as much gas as before,” Margolin said.

Over on the East Coast, several points on the Columbia Gas Transmission (TCO) system in Pennsylvania and West Virginia are expected to be affected by maintenance on Texas Eastern Transmission (Tetco), mainly restricting all receipts and deliveries between the two pipes at the Waynesburg interstate interconnect. The work will effectively cut up to 273 MMcf/d of deliveries from TCO onto Tetco from Thursday to Saturday.

“Tetco’s maintenance calendar does not explicitly say that any flows will be impacted, and Tetco is usually very explicit and accurate regarding its curtailments,” Genscape’s Josh Garcia said. “Tetco only specified that the interconnects with TCO at Waynesburg and with Equitrans Pipeline at Crayne might experience higher-than-normal pressures. In this case, however, it is safer to assume that TCO’s stated impacts are accurate.”