A highly anticipated Energy Information Administration (EIA) storage report failed to meaningfully move the natural gas price needle on Thursday. May Nymex futures swung in a roughly 10-cent range but when the dust settled, the prompt month closed the session only 3.5 cents lower day/day at $1.552. June slipped 4.0 cents to $1.672. 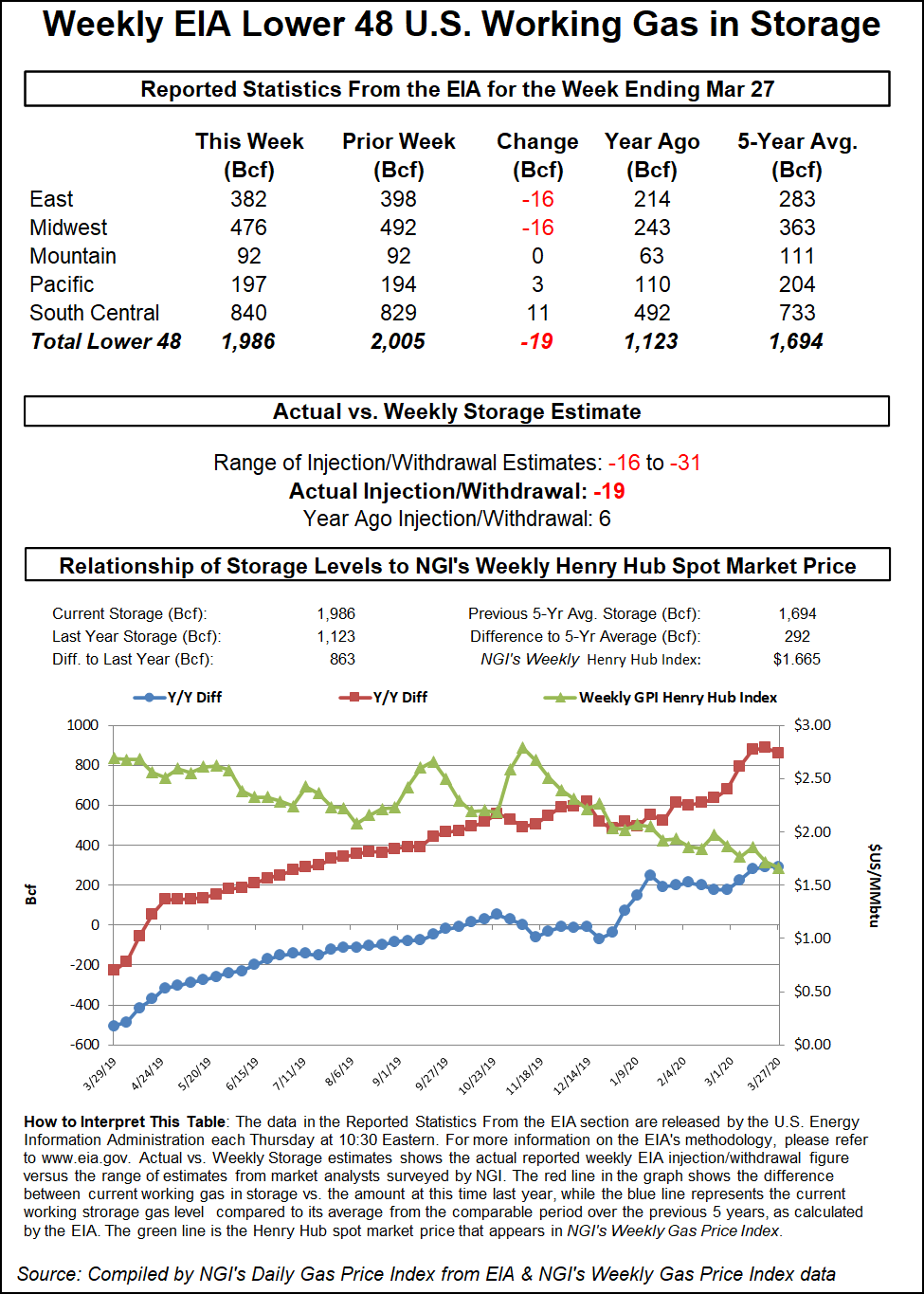 Spot gas prices continued to retreat as mild weather was seen prevailing over much of the United States into next week. NGI’s Spot Gas National Avg. fell 6.0 cents to $1.330.

After a week of stay-at-home mandates across much of the Lower 48, natural gas traders had eagerly anticipated Thursday’s storage report from the EIA as it was expected to offer the first glimpse of how much demand destruction has occurred since the restrictions were put in place to slow the spread of Covid-19.

The EIA reported a smaller-than-expected 19 Bcf withdrawal from storage inventories for the week ending March 27. Although several Bcf shy of consensus, the EIA figure fell within a broader range of estimates that were as low as 16 Bcf and as large as 31 Bcf.

“This reveals a little more demand destruction having taken place versus last week, and a rather loose market,” Bespoke Weather Services said.

Nymex natural gas futures, already several cents lower ahead of the EIA’s 10:30 a.m. ET report, slipped another few ticks as the print crossed trading desks. By midday, however, the prompt month recovered some of those losses and ultimately settled a few cents above its intraday low.

“Obviously, these price levels are factoring in a lot of demand destruction already, but what we have no clue on is the duration, and that is ultimately what makes the market a more difficult trade in the near term,” Bespoke said.

Discussing the EIA storage report on social media platform Enelyst.com, managing director Het Shah agreed that “no one has a good handle” on the demand and production impacts from low prices, and the impact to liquefied natural gas from global balances. As such, “$1.50-1.65 seems to be the safe range til we get more info.”

The reported draw compares with last year’s 6 Bcf injection for the similar week and matches the five-year average withdrawal of 19 Bcf.

“However, we are frequently warning that number is poised to escalate to potentially infeasibly high levels as the demand destructive elements of the Covid-19 pandemic precede and outpace the production reductive components,” Genscape senior natural gas analyst Rick Margolin said.

Market observers on Enelyst said it was wise not to read too much into one EIA report, especially as the market is in the midst of a transition period from withdrawals to injections. “But net bearish nevertheless and won’t help as injections start next week,” said one participant.

Although weather has failed to grab many headlines amid the coronavirus outbreak, patterns for late next week and beyond have trended chillier the past two days, according to NatGasWeather. Most major weather models are showing stronger cool shots moving into the northern United States, with the April 10-14 period gaining nearly 15 Bcf in demand as overnight lows in the northern part of the country are likely to drop into the 10s to 30s. Although this cooler trend could offer some support to gas prices, the outlook was a touch milder for April 15-17, the forecaster said.

With more widespread warmer weather on the horizon and the fallout from the pandemic still playing out, the issue of demand destruction will continue to be the main factor that influences the market, according to Bespoke. Unfortunately, this makes natural gas a tough market to trade as there is no way to know yet how long the economic shut-downs will last, the firm said.

“One thing we do see is a very stretched curve, with an extreme level of contango now in play.”

At current levels, what the curve does, according to Bespoke, is increase the risk for a stronger snap back higher once things do improve. “The problem, again, is that we just do not know when that happens, or how low we may go first.”

While the potential for production growth to slow considerably over the coming months has been a positive development for forward prices in the Permian Basin, crushing demand from the coronavirus and seasonally milder weather is painting a far different picture in the spot market.

Permian pricing has fluctuated in and out of positive territory over the past year and a half, but it was at this time last year that Waha plunged to a record low of minus $5.75. That was when the market was still waiting on Kinder Morgan Inc. (KMI) to bring online its first Permian gas takeaway project, Gulf Coast Express.

Fast-forward a year, and the 2 Bcf/d pipeline has been running at full capacity for more than seven months, and prices are back at the bargain-basement levels seen before the project came online. Furthermore, regulatory issues have pushed back the expected in-service of KMI’s second Permian takeaway project, Permian Highway Pipeline, to early 2021, rather than the initial target of October.

Similar losses were seen throughout the rest of the country. Henry Hub posted a larger decline of 12.0 cents day/day to average $1.480.