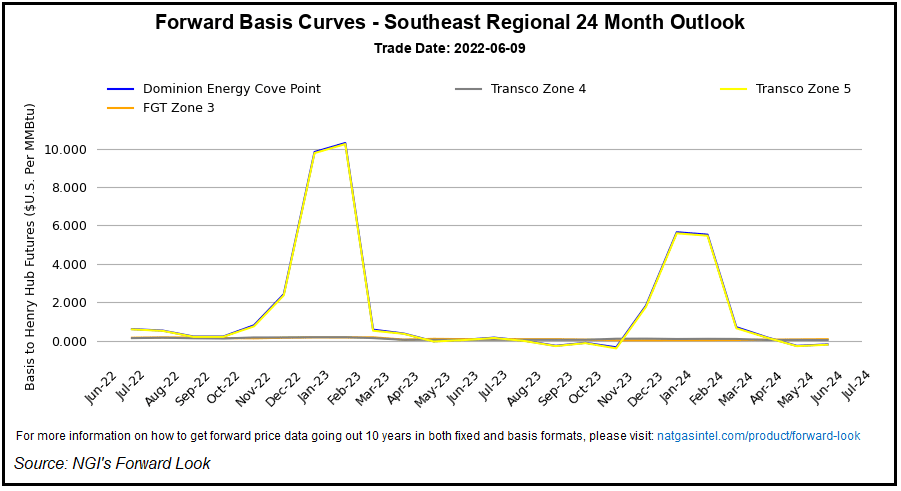 Spot gas prices were overwhelmingly higher ahead of the weekend, with thunderstorms rolling through the northern United States but oppressive heat baking the South. NGI’s Spot Gas National Avg. jumped 33.5 cents to $8.215.

Two days after an explosion at Freeport LNG, the market was still unclear about how the subsequent outage would impact balances. Freeport officials have indicated the terminal would remain shut down for at least three weeks. This means that gas would be available for domestic consumption or be put into storage.

The Schork Group team said these “found molecules” are expected to offset the decline the market typically sees from May storage injections to June builds. The analysts noted, however, that the loss of Freeport LNG cargoes would strain an already tight global gas market and underpin European gas prices relative to U.S. prices. The longer Freeport remains offline, the greater the price differential between the two markets.

“Freeport could be a game changer this season,” Schork analysts said. “Should the plant stay out of commission through the dog days of summer, then about 200 Bcf of LNG will remain in the U.S.”

That would be ideal for Lower 48 balances. The Energy Information Administration (EIA) reported a 97 Bcf injection into underground storage inventories for the week ending June 3. This was in line with expectations, but fell short of the triple-digit mark to which some estimates had pointed.

Total working gas in storage rose to 1,999 Bcf, which is 398 Bcf below year-earlier levels and 340 Bcf below the five-year average, according to EIA.

Mobius Risk Group analysts noted that this year, the week following the Memorial Day holiday had almost identical total degree days as compared with the same week last year. As a result, the lack of any clear sign of loosening in a $9.00 pricing environment is a concern for market bears.

Notably, salt storage inventories, which increased by only 3 Bcf during the reference week, also were worrisome and may have been the reason prices bounced as feverishly as they did after the EIA data was published.

The agency’s next report, and the two subsequent storage reports, may have increased scrutiny placed on salt storage, according to Mobius. These facilities theoretically would be called upon to warehouse more of the lost LNG feed gas demand from Freeport’s outage.

“If power demand increases enough to prevent large salt builds, the market may be able to stay put,” Mobius analysts said. “Conversely, a sharp uptick in salt injections will be a headwind for a market inching closer to peak hurricane season.”

If the latest weather models are any indication, the former appears more likely. Bespoke Weather Services said given the latest storage data, unless Freeport is out more than six weeks, the market still may have issues with storage. Production is creeping up somewhat and could get within earshot of its recent highs over the weekend, it noted. However, the weather remains hot.

NatGasWeather said hot conditions were forecast to continue from California to Texas for several more days. Highs are expected to reach the mid-90s to as much as 110 degrees for regionally strong demand.

For now, the northern half of the country remained comfortable as daytime temperatures held in the 60s to 80s. However, heat was expected to begin building over the weekend as strong high pressure over Texas and the Southwest expanded north and eastward, according to the forecaster. This may push temperatures into the 90s over large swaths of the interior United States throughout the coming week, including from Chicago to near New York City. NatGasWeather said national cooling degree days (CDD) through the period may hit close to the highest levels of the past 40 years.

Beyond that, Bespoke said there were hints that weather patterns could normalize into the final week of June, but June CDDs still look “quite impressive.” They are projected to be on par with last year, which was the hottest June since 2011 in Bespoke’s dataset.

“In short, we still lean to the idea that price risks have more upside risk, though confidence has to remain lower until there is more clarity on the Freeport situation, to be sure,” the firm said.

Spot gas prices strengthened ahead of the spreading heat wave. The majority of price increases were in the double-digits, but a couple of locations in the Southeast rose by more than $1.000 from Thursday’s levels.

Prices picked up as much as 50.0 cents at the majority of locations in the country’s midsection. Southern Star edged up slightly more, gaining 51.0 cents day/day to average $8.140. Chicago Citygate cash was up 43.5 cents to $8.315.

Meanwhile, Tennessee Gas Pipeline (TGP) declared an emergent repair at Station 860 near Centerville, TN, on Thursday. This was expected to to restrict up to 120 MMcf/d of flow starting Friday.

TGP also said secondary out-of-the-path nominations traveling through Segment 548 BH could be at risk beginning Friday. Over the past 30 days, STA860TOSTA87 had flowed on average 1.55 Bcf/d with a maximum rate of 1.66 Bcf/d, according to Wood Mackenzie. No end date for the repairs at Station 860 was provided.